Not A Joke: Hillary Blames Charleston Shooting On Donald Trump 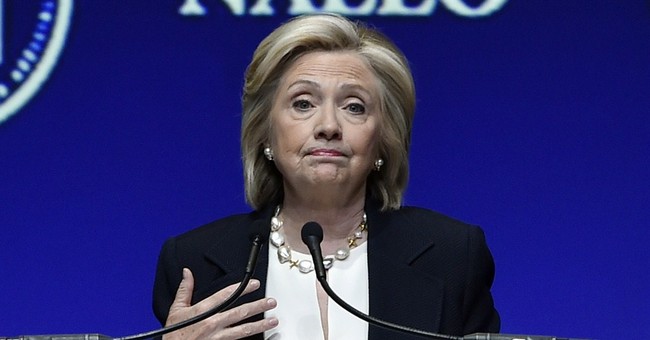 While the nation mourns for the victims and their loved ones from Wednesday night's shooting, Hillary Clinton has found the root cause of the shooting... Donald Trump.

She implied as such in an interview with Jon Ralston:

“We have to have a candid national conversation about race, and about discrimination, hatred, prejudice,” Clinton said of the Charleston shooting in an interview with Jon Ralston on his show “Ralston Live.”

"Public discourse is sometimes hotter and more negative than it should be, which can, in my opinion, trigger someone who is less than stable.”

Clinton, the Democratic presidential candidate, did not say Trump's name, but went on to explicitly mention remarks he made during his announcement speech on Tuesday, the day before a white gunman opened fire in a historically African-American church, killing nine people.

“I think we have to speak out against it," Clinton explained. "Like, for example, a recent entry into the Republican presidential campaign said some very inflammatory things about Mexicans. Everybody should stand up and say that’s not acceptable.”

So inflammatory remarks about Mexicans caused Dylann Roof to murder blacks, which he had been planning to do for six months? Ok, Hillary.

Trump's comments that Hillary was alluding to were:

During his announcement speech Tuesday, Trump said "the U.S. has become a dumping ground for everybody else’s problems" and said people who immigrate here from other countries, like Mexico, are not the "right people."

Certainly inflammatory, although he's not necessarily wrong on the issue. I don't see how those comments would incite anyone to commit murder.

And of course, Hillary couldn't let a tragedy go to waste without bringing up gun control- we need background checks.

Except that Dylann Roof's dad gave him a gun for his 21st birthday. A background check would not have stopped that, although there are conflicting reports he may have bought the gun himself.
WATCH: Why Keith Olbermann Says 'Dumb Bastard' Trump Should Receive the Death Penalty
Beth Baumann
Senate Democrats Block Additional Funding For Coronavirus Relief and Paycheck Protection Program
Reagan McCarthy
The Simple Reason Why the WSJ Editorial Board Was More Detailed About 'Bidenomics'
Matt Vespa
Is AG William Barr on the Chopping Block?
Matt Vespa
Another Reason to Be Optimistic? Biden Is Underperforming Hillary Clinton's 2016 Numbers In Key States
Matt Vespa
Paging Dr. Fauci: Why Is He Silent on Whether the Women's March was a 'Superspreader Event'
Matt Vespa
CARTOONS | AF Branco
View Cartoon
Most Popular