The $24,000 Solution to Mass Shootings at Schools 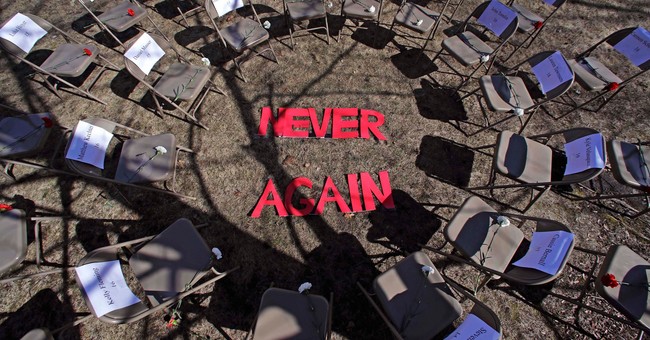 First, let's establish one absolute truth among all the hysteria that exists in the aftermath of a school shooting: there is not one independent, conservative, libertarian, or liberty-minded individual who wishes any young person dead. Not one. Yes, we like our guns and we like our freedom, but we own, keep, and use those guns to defend lives, not take them. Any assumption to the contrary is a non-starter to any conversation about how to deal with this national crisis.

Right now, everyone is looking for a quick and easy answer, but, newsflash, there isn't any, especially if we wish to continue living in a free society. This magical Utopian world where some simple test can be administered to potential gun buyers to identify them as future mass killers and prevent them from purchasing a gun doesn't exist. Heck, we don't even do much about felons who are caught trying to purchase firearms. How can additional measures be successful when we're barely enforcing the laws that are already on the books?

From a 2016 Inspector General report on the number of felons who were actually prosecuted for attempting to purchase a firearm:

"We found that the number of NICS denial prosecutions has dropped substantially since FY 2003, when 166 subjects were accepted for consideration of prosecution. Between FY 2008 and FY 2015, an 8 year period, ATF formally referred 509 NICS denial cases that included 558 subjects to USAOs for possible prosecution. The USAOs accepted for consideration of prosecution 254 subjects (or less than 32 subjects per year), declined to prosecute 272 subjects, and decisions for 32 were pending at the time of our review."

Keep in mind that the number of felons attempting to purchase firearms exceeds 100,000 per year.

So, aside from actually enforcing current laws, how do we identify and stop potential mass shooters? Since almost all mass shooters have been males, do we subject men to extra scrutiny? The percentage of shooters who were fatherless is also staggeringly high; do we add extra measures of scrutiny for that demographic? How about those being treated for depression? How do we separate the ones who are potentially homocidal from those who are simply going through a rough time in their life?

Now, if there's one thing we can all agree upon, it's that we need to keep firearms out of the hands of mentally deranged individuals. But, again, what exactly does this mean, and how do we accomplish this? Do we automatically deny a firearm to every woman who has ever experienced post partem depression? Do we deny our veterans or law enforcement officers the right to own and possess a firearm because they once sought counseling for post traumatic stress syndrome? Where does one's right to own a firearm start and end? As I said before, there are no easy answers.

For some, the perceived benefit of giving up our freedoms are worth more than the freedoms themselves. I'm not in that camp.

So, what's the answer? Better yet, what's an answer?

Every day, we hand over our most precious national treasures, our children, to teachers and administrators with the belief that they will do everything within their power to return them to us alive (and, hopefully, a little smarter than when the day started). So, if we're trusting these people with our most precious national resource, then why is it so far fetched to trust them to learn to use, carry, and deploy a firearm in defense of those assets?

Carrying a gun is not rocket science. The other side would have us believe that these guns are so easy to use that they practically operate on their own, yet somehow teachers are incapable of using them safely and effectively? Literally hundreds of thousands, if not millions, of firearms are carried on a daily basis by responsible Americans including law enforcement officers, security guards, military personnel, and, likely the largest group of all, regular citizens. Why is it so far fetched to assume teachers are capable of doing the same? It's contradictory to suggest these people are responsible enough to care for our children eight hours a day, five days a week, but not responsible enough to carry that which will keep them safe.

My parents were teachers, as is my wife and many members of my extended family. I know not all teachers are comfortable with carrying a firearm on a daily basis. Not everyone has the mental fortitude necessary to be prepared to take the life of another human being. And that's fine. For the rest though, why not give them an opportunity to defend our children if they so choose? Wouldn't it be preferable to have a teacher or two, or even a dozen, potentially end a mass shooting with a firearm than have them sacrifice their lives while shielding students?

But even if these districts allow willing teachers to carry a firearm, there's still one problem: cost.

Anyone who carries a firearm on a daily basis can tell you that it's not cheap. In addition to purchasing the firearm itself, there's the expense of training, gear, clothing, and ammunition. Many teachers already end up paying for basic supplies out of pocket. How can we expect them to cover the cost to carry regularly?

There's an easy solution: offer each willing teacher $2,000 per year to carry a firearm regularly. That's $24,000 for a dozen armed teachers in a single school district. While that may seem like a lot, it's much cheaper than say, installing metal detectors and hiring extra personnel to operate those machines.

Now, to cover the cost of arming teachers, the school district may have to forego some other expenses like providing an automobile for every administrator or keeping the new gymnasium at the perfect temperature. And those new jerseys for the soccer, baseball, wrestling, basketball, football, lacrosse, tennis, and golf teams may have to wait another year.

I can hear the naysayers already, but their objections arise out of complete ignorance about not only carrying a concealed firearm, but firearms themselves. Remember, this is the same crowd who tried to convince us that concealed carry laws would turn the entire country into "Dodge City" where roaming vigilantes get into frequent gunfights with criminals and innocent bystanders get killed in the crossfire. They also predicted that these supposed gun-toting nuts would slay their fellow man in fits of rage like Charles Bronson in "Death Wish." They said the same thing about campus carry. Yet, there hasn't been a single incident of a student getting into a gunfight with a teacher or fellow students because they couldn't control their anger during a classroom discussion. None of these anti-gunners' predictions have come to pass. None.

Of course, we should require additional training for those planning to carry a firearm in a school. To that end, I don't know of one trainer who wouldn't offer their services for free to those teachers. In fact, it's already happening. And, I have no doubt that the NRA would step up and offer discounted rates on liability insurance for these teachers. Heck, they might even offer it for free.

While this solution would not guarantee a 100% success rate in preventing mass shootings, it's important to note that nothing would. But chances are arming teachers would serve as a tangible deterrent to anyone considering something so evil as shooting up a school. Think about it. When was the last time you heard about a mass shooting at a gun show? Deterrence works.

And, after all, aren't we supposed to be operating on the idea that, "If we could just save one child"?