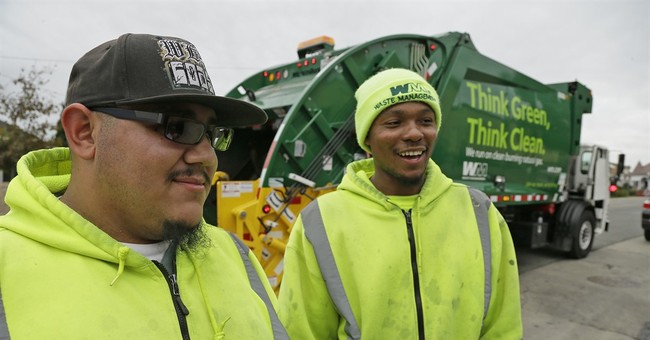 If the Trump tax cuts are nothing more than "tax cuts for the rich," then one of two things must be going on: either wage-earning garbage collectors and Walmart employees are rich, or the tax cuts do indeed help others besides rich corporate "fat cats" and "evil corporations."

In case you missed it, Walmart raised the beginning pay for its workers from $9 per hour to $11 per hour, which is a 22-percent increase. Additionally, it announced bonuses of up to $1,000 for its employees. It also extended maternity leave to ten weeks and now offers $5,000 to adoptive parents for adoption expenses.

Walmart's CEO Doug McMillan stated in a letter to employees:

As you know, the President and Congress have approved a lower business tax rate. Given these changes, we have an opportunity to accelerate a few pieces of our investment plan. We plan to continue investing in you, in our customers through lower prices, and in our future--especially in technology to help improve your jobs and the experience for our customers.

Leftists, however, will give credit to anything but the tax cuts. They will suggest the savings come from store closings, competition, or that the plans were already in place. They will completely ignore what the CEO of Walmart actually said, which was, "We have an opportunity to accelerate a few pieces of our investment plan."

That's right, you heard it straight from the horse's mouth. Without the government taking money from these supposedly "evil corporations," they will have more freedom to expand their business plans. What a concept!

Let's take a look at another sector of employment known for rich, cigar-smoking, champagne-swigging, Mercedes-driving, elitists...garbage men (or sanitation engineers, if you'd like to be politically correct). These workers just got a huge bonus thanks to the Trump tax cuts. Waste Management announced that it would give $2,000 bonuses to over 34,000 non-salaried employees.

We are about to get a tax benefit as our U.S. corporate tax rate goes from 35 percent to 21 percent. In considering how to best spend that, we wanted to find a way to help grow our economy, which in turn, will help grow our business, and give some of the tax savings back to those hardworking employees who do not get the opportunity to participate in our salaried incentive plans.

Again, he didn't give credit to low-interest rates, quantitative easing, Chuck Schumer, Nancy Pelosi, former President Obama, or magic pixie dust. He credited the tax cuts! However, if you're an elitist like Nancy Pelosi, a $2,000 bonus is mere "crumbs." In her world, life is better if she and her cronies keep more corporate profits (which she had nothing to do with earning) and dole them out to their preferred recipients.

Let's just assume that these undeserving recipients of "crumbs" earn an average wage $15 per hour. That amounts to a $31,200 gross annual income. A $2,000 bonus represents more than a 6-percent gross raise. Coupled with their individual tax savings from the tax cuts, they are likely to see a double-digit increase in their net take-home pay. Although, I'm sure that they'd rather have Nancy spending their "crumbs," right?

There are lists of companies offering employee bonuses, all giving credit to the tax cuts. Recent big names include AT&T, Comcast, and several major airlines and banks. Not to mention, these bonuses are all going to front-line employees - you know, those titans of wealth known as tellers, customer service representatives, and flight attendants.

To the Leftists, who prefer more money going to their government overlords, I have a suggestion: if you are one of those fortunate "fat cats" working for corporate America and receive some "crumbs" from said employer, feel free to forward the check to Uncle Sam along with the increase in your pay due to those same tax cuts. Otherwise, you're a hypocrite.

Oh, and one last thing: bonuses and tax cuts were brought to you by the letter "R," because not one "D" voted for them.