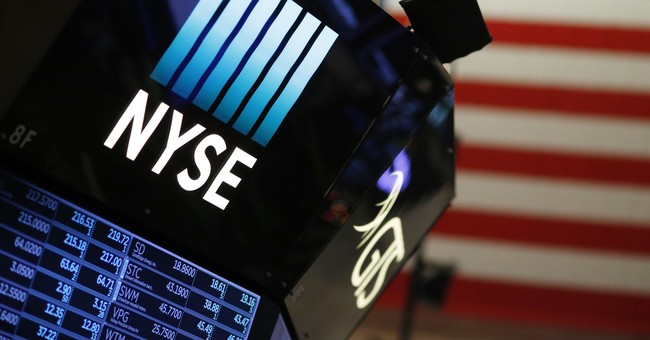 "Tax cuts for the Rich!"

"The rich are getting richer!"

"Over 50% of Americans are not enjoying stock market gains!"

The Left can never stop promoting the same old lies about economics - about which they know nothing. Their track record proves it. Remember the doom and gloom past predictions from people like Mark Cuban about the stock market crashing after Trump's presidential victory?

The Dow Jones Industrial Average gained well over 25 percent for the year. It broke records unprecedented in history. It has only achieved these level of returns fifteen times since 1921, and several of those years followed major corrections.

This market was not in a correction cycle. The recovery following 2008 was a correction recovery. This market, for the last several years, was being held down by poor economic policies from the previous eight years. It was being choked out by excessive over-regulation and high corporate tax rates. According to the Tax Foundation, the United States had the 4th highest corporate tax rate on the planet. This was a market shackled, waiting to be set free.

Donald Trump will go down in history as the Great Emancipator of the American Economy, and it will last until our government overlords burden it once again. Yes, there will be profit-taking. Yes, there will be ups and downs. And yes, with every one of them, Leftists will denounce capitalism, the "rich", and scream for someone to "do something!"

Let's look at one sector of the economy in particular: banking. Just for fun, assume that all bankers are greedy and selfish. I know it's a stretch, but hear me out. Considering that, why would any banker in his right mind make a loan to someone without an excellent ability to pay it back?

Government interference in free markets has been the biggest culprit when it comes to failed loans. The minute the government started guaranteeing loans and forcing banks to make loans to incapable borrowers, the stage was set for a major financial meltdown. Remember the housing collapse in 2008? Couple that with cronyism and political payback, and you have the last several decades of banking policy.

Like "tax cuts for the rich," Leftists sold the illusion that all bankers were bad and needed to be more regulated, while at the same time forcing or incentivizing those same bankers to make bad loans. They have done the same thing to the healthcare industry. The next thing up for disaster: government-guaranteed student loans. No banker in the world would loan money to someone so that they can major in gender studies at a university that costs $50,000 per year. Correct that...not without a government guarantee, that is.

How do we fix all this? Remove the government from the mix. Period. That's the direction Trump is moving. The result? The market has responded in leaps and bounds.

Whose fault is it that Americans don't participate in investing where there are literally no barriers to entry? There are mutual funds where the initial minimum investment is roughly the cost of a tattoo, iPhone, or big screen TV. What's the excuse? Additionally, any American who has a 401(k) but does not invest in it can blame no one but himself.

Even government workers benefit from the market's rise. It makes their woefully underfunded pension more solvent until their government managers steal more money from it to pay for other "necessities," like free college tuition and healthcare for people who entered the country illegally.

The greatest lie of all is convincing the easily fooled into believing the stock market is a zero-sum game. Want to be a corporate fat cat? Buy some stock in your most hated "corporate evil doer's" company, and you too can benefit from capitalism. The concept of capitalism is so simple that only Leftists get it wrong.

Apple sells a product that hundreds of millions of people own, profits from the sale of those products and pays its employees and stockholders from those profits. How do they screw poor people again? (Besides by selling them a product they shouldn't be buying, because they can't afford it and should be investing their money instead.) To be a zero-sum game, for every dollar of profit Apple makes, someone would have to lose a dollar. This fantasy of the Left simply does not exist.

While the Left continues to bemoan "the rich" and sees Russia collusion in every cloud in the sky, America is winning again as evidenced by the unbridled optimism demonstrated in recent market gains. Unlike bankers making loans to incapable borrowers whose losses are covered by taxpayer guarantees, the market has no guarantees. Investors make decisions to buy based on the assumption that the future will be brighter than the present and markets go up accordingly.

America's future looks bright once again. The evidence is in the 70+ new highs for the year.

But looking at actual evidence has never been a strong suit of the Left, has it?

Sen. Mike Lee Tears Bob Menendez Apart in Heated Back and Forth Over Mob Violence Resolution
Redstate
Does it mean something that the SDNY’s Public Corruption Unit is handling Ghislaine Maxwell’s case?
Hotair