AG Sessions: Immigrant Children 'Get Better Care Than A Lot of American Kids Do' 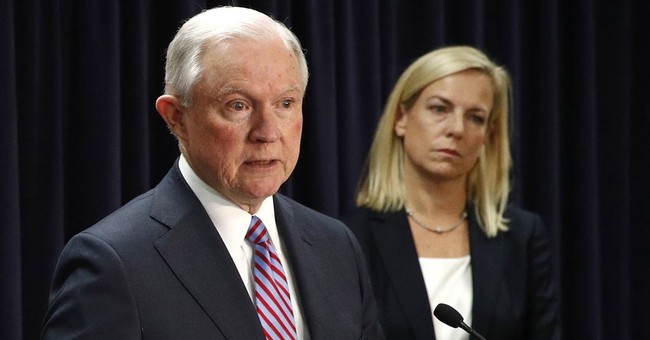 The immigration crisis at the southern border reached its peak this week, as immigration officials continued to separate immigrant families as they attempted to cross into the country illegally. With President Trump's Department of Justice's announcement of a "zero tolerance policy" when it comes to illegal immigration, all adults crossing the border illegally were set to be prosecuted. Due to this strict enforcement of the law, immigration officials separated children from their parents and placed them into the protective custody of the Department of Health and Human Services while their parents awaited charges.

Though previous administrations have taken similar actions to prevent illegal immigration and ensure children are safe from violence and human smugglers, the national media, and politicians on both sides of the political aisle, have decried the administration's actions, demanding the president take unilateral action to end the policy.

On Wednesday, the president signed an executive order ending the separation of immigrant children from their families. However, it still maintains the administration's "zero tolerance policy," which opens up various legal questions and potential legal problems as immigration officials would need to detain entire families for extended periods of time. One obstacle is the 1997 Flores settlement agreement, which prohibits the government from holding immigrant children for more than 20 days. Now, as Beth reported earlier, the House is prepared to hold votes on two different GOP immigration bills in an attempt to solve these issues.

The crisis has received wall to wall coverage from the media, and political commentators are weighing-in to say that what is happening is immoral. On MSNBC's Morning Joe Thursday morning, Rev. William Barber, Co-Chair of the Poor People's Campaign, turned to the Bible to oppose the separations, stating, "The first Evangelical scripture is you take care of the poor. Jesus said it would be better to tie a stone around your neck than to offend the little ones. Policy violence against children, families is immoral..."

Watch the full clip below.

Many Americans want to solve the current immigration crisis and want to see the country strengthen its immigration system, but some are wondering why America isn't giving the same amount of attention to children struggling here at home.

A number of groups like the Immigration Equality Action Fund, Together Rising, the Refugee and Immigrant Center for Education and Legal Services (RAICES), and fundraisers, like the one created by the Immigrant Defenders Law Center, are working to help immigrant children trying to come into the United States. But according to the National Center for Children in Poverty, many U.S. families are struggling to provide for their children:

About 15 million children in the United States – 21% of all children – live in families with incomes below the federal poverty threshold, a measurement that has been shown to underestimate the needs of families. Research shows that, on average, families need an income of about twice that level to cover basic expenses. Using this standard, 43% of children live in low-income families.

Children's Rights, a non-profit organization that acts as a "national watchdog organization advocating on behalf of abused and neglected children in the U.S.," provides some startling statistics about children living in the foster care system that desperately needs more reform:

On any given day, there are nearly 428,000 children in foster care in the United States.

On average, children remain in state care for nearly two years and six percent of children in foster care have languished there for five or more years.

Despite the common perception that the majority of children in foster care are very young, the average age of kids in care is nearly 9.

In 2015, more than half of children entering U.S. foster care were young people of color.

While most children in foster care live in family settings, a substantial minority — 14 percent — live in institutions or group homes.

At the beginning of April, the president signed an executive order to reduce poverty in America by "promoting opportunity and economic mobility."

The order aims to "empower individuals by providing opportunities for work, including by investing in Federal programs that are effective at moving people into the workforce and out of poverty." Among other things, it aims to "improve employment outcomes and economic independence."

Furthermore, the order looks to "promote strong social networks as a way of sustainably escaping poverty (including through work and marriage)" and will "address the challenges of populations that may particularly struggle to find and maintain employment (including single parents, formerly incarcerated individuals, the homeless, substance abusers, individuals with disabilities, and disconnected youth)." Another important measure is that the order plans to "reduce the size of bureaucracy and streamline services to promote the effective use of resources."

At the end of April, the president issued a proclamation declaring May 2018 to be National Foster Care Month, where he praised foster care parents for "providing a stable, secure, and nurturing home environment" for hundreds of thousands of children.

However, the president acknowledged "that there is still much more we can do to prevent the abuse and neglect that forces children into foster care placements," because "For the fourth consecutive year, the number of children placed in foster care has increased, driven in part by the opioid crisis and drug abuse."

The proclamation also mentions the Family First Prevention Services Act, which was signed into law "to keep children at home and out of foster care by allowing States to use matching funds from the Federal Government for substance abuse prevention and treatment, mental health services, family counseling, and parenting-skills training."

Despite these steps, the administration believes more needs to be done.

In a recent USA Today op-ed, Attorney General Jeff Sessions addressed the immigration crisis, stating that the administration does not want to see families separated at the border and that it wants a "safe, lawful system of immigration." Sessions also added:

And these children are well cared for. In fact, they get better care than a lot of American kids do. They are provided plenty of food, education in their language, health and dental care, and transported to their destination city — all at taxpayer expense.

In total, HHS is spending more than one billion taxpayer dollars a year providing quality care.

As the Attorney General stated at the end of his piece, if both parties of Congress can work together, they can take care of the immigration crisis, strengthen border security, and tackle the issues facing Americans here at home. "Congress could make that happen quickly — and they should," he said.