There's a Petition Going Around to Kick Education Secretary DeVos Out and Replace Her With... 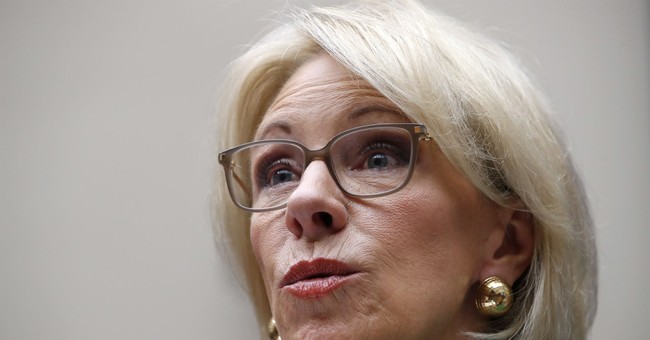 Thousands of Americans would like to see famed basketball player Lebron James go from playing on the court to playing politics.

As of Thursday, over 9,800 people have signed a petition to strip Besty DeVos of her title and name Lebron the next Secretary of Education.  Once the page reaches 10,000 signatures, it will be sent to President Trump.

“Pretend there are two candidates for U.S. Secretary of Education,” the petition reads. “[A]nd YOU to get hire them.”

We’re then given a rundown of who our two candidates are:

The first candidate is famed athlete LeBron James, a highly respected and extremely influential community advocate and activist who recently opened a state-of-the-art public school for at-risk children in Akron, Ohio — with community services on-site like job placement for parents, guaranteed college tuition for every student who graduates, and a score of other student services like a FREE bicycle and helmet.

The second candidate is Betsy DeVos, a scandal-ridden Republican donor who shows an inexcusable dislike for public education, wants to gut protections for women and minorities, and has advocated for teachers to be armed in schools.

It would be an easy choice, wouldn't it?

The petition was created just days after Lebron’s I Promise School was unveiled in his hometown of Akron, Ohio. The school, a joint project by the LeBron James Family Foundation and Akron Public Schools, is open to underperforming students and focuses on “STEM, hands-on, problem-based learning,” according to the foundation’s website.

Students will also receive a handful of perks, such as free breakfast, lunch and snacks, a free bike and helmet and, if they graduate, a four-year scholarship to the University of Akron.

Currently, the school is only open to 240 at-risk third- and fourth-graders who were randomly selected from a larger pool. However, over the next few years, the school will be expanded to include 1st through 8th grade.

Per the foundation’s “We Are Family” philosophy, families of students will also enjoy some extra benefits, such as access to a food pantry and GED classes for parents and caregivers.

As expected, the school has earned Lebron much praise, especially from left.

.@BarackObama and I are so proud of @KingJames and @IPROMISESchool. Kids in Akron and across the US are lucky to have you as a role model on and off the court. Keep using your platform for good and giving our kids a chance to shoot for the stars. ???? #ReachHigher #BetterMakeRoom pic.twitter.com/hyS6UM2A7b

But that doesn’t mean he’ll consider a career change.

Thankfully, the petitioners’ expectations are reasonable.

“I know that's it's unlikely that Lebron James would give up his highly successful career—especially since he has been generous enough to use that influence to be an inspirational community and youth advocate for millions,” the page reads. “Even more unlikely is that Lebron would ever stand to work for Donald Trump and his hateful rhetoric...but it's worth a try!”

Unlikely, indeed. The basketball star said he’s not even willing to sit down with our president. That’d certainly make working together difficult.

“I would never sit across from him,” he told CNN’s Don Lemon during an interview. “What I've noticed over the past few months [is] he's kinda used sports to kinda divide us, and that's something that I can't relate to.”

The disdain is mutual.

It looks like the left is going to have live with DeVos for a little while longer.

Share this on Facebook
Tweet
President Trump: We Expect to Have a Vaccine for Every American by April
Cortney O'Brien
Why Did Fox News Protect George Soros?
Matt Vespa