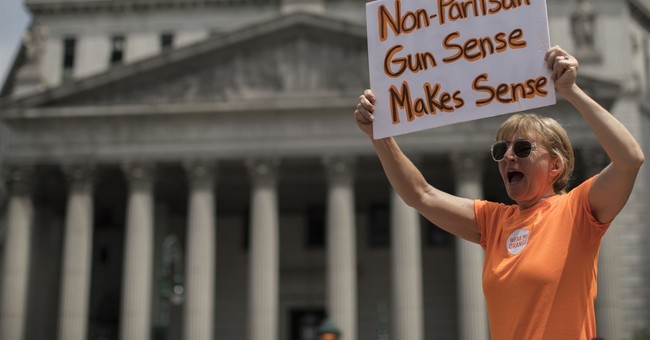 The Second Amendment Foundation (SAF) and the Citizens Committee for the Right to Keep and Bear Arms (CCRKBA), two pro-gun rights groups, are challenging the constitutionality behind Washington State gun control Initiative 1639.

According to the Alliance for Gun Responsibility, if passed, I-1639 would:
• Raise the age someone can purchase a rifle to 21.
• Create an "enhanced background check system similar to what is used for handguns."
• Require a person to complete a firearms safety training course.
• Create a common stand for secure gun storage.

Secretary of State Kim Wyman said there have been questions about whether or not the petition's format complies with state law.

“Significant concerns have been raised about whether the format of the I-1639 petition sheets complies fully with Washington’s constitutional and statutory requirements. RCW 29A.72.100 requires that a ‘readable, full, true, and correct’ copy of the proposed measure be printed on the reverse side of the petition," Wyman told KCPQ-TV. “The I-1639 petition sheets presented a text of the measure that lacked underlining and strikethroughs to explain its changes to existing law.”

The person proposing the measure shall print blank petitions upon single sheets of paper of good writing quality (including but not limited to newsprint) not less than eleven inches in width and not less than fourteen inches in length. Each petition at the time of circulating, signing, and filing with the secretary of state must consist of not more than one sheet with numbered lines for not more than twenty signatures, with the prescribed warning and title, be in the form required by RCW 29A.72.110, 29A.72.120, or 29A.72.130, and have a readable, full, true, and correct copy of the proposed measure printed on the reverse side of the petition.

"The problem with the petitions is that they failed to underline new law and strike through removed law so that the reader could not know the current law, added law and subtracted law," Gottlieb told Townhall.

SAF's attorney's allegedly reached out to the initiative's organizers to make them aware of the problem but received no response, Gottlieb said in a statement.

"If they are so careless about knowing what is, or is not, shown on their own petitions, how is anyone else supposed to know? They’re asking people to sign an initiative that is difficult, if not impossible to read,” Gottlieb said. “And now we’ve discovered that even if people can read the fine print, it does not appear to be a ‘true and correct copy’ of the proposed measure as submitted to the state."

Gottlieb said he's unsure how voters are supposed to know what changes are being proposed when it's not being pointed out to them.

“What are voters supposed to think about this,” he wondered. “How are they supposed to know what they’re being asked to change? How can they tell the difference between what would become law, and what would be replaced? Are they simply expected to sign a document they can’t read and vote on a measure they don’t understand? That’s not democracy, that’s Trojan Horse politics," Gottlieb said. "If these petitions, which are not compliant with state law, are turned in,” Gottlieb vowed, “our organizations will seek to have them invalidated by the court.”

SAF provided Townhall with the following picture which illustrates what changes are being proposed in I-1639:

The initiative has substantial changes and those changes are not highlighted or struck through, as required by state law, SAF and CCRKBA allege.

On June 18th, SAF and CCRKBA attorneys sent the following demand letter to initiative organizers, warning that litigation would ensue if the petitions were not brought up to state code (emphasis mine):

I represent the Second Amendment Foundation, and it has come to our attention that the I-1639 campaign is utilizing unreadable petitions in violation of RCW 29A.72.100. This violation has the potential to invalidate the signatures illegally gathered to date, and we demand that the sponsors correct this violation and conform to the legal requirements.

The person proposing the measure shall print blank petitions upon single sheets of paper of good writing quality (including but not limited to newsprint) not less than eleven inches in width and not less than fourteen inches in length. Each petition at the time of circulating, signing, and filing with the secretary of state must consist of not more than one sheet with numbered lines for not more than twenty signatures, with the prescribed warning and title, be in the form required by RCW 29A.72.110, 29A.72.120, or 29A.72.130, and have a readable, full, true, and correct copy of the proposed measure printed on the reverse side of the petition. [Emphasis added]

Although RCW 29.72.100 and WAC 434-379-008 do not specify a font size for the “readable” initiative printed on the back of the petition, the presumption is that reprinting the statutory language is to fully inform voters. The petitions for I-1639 have the proposed measure printed on the back of the sheets in such fine print as to be unreadable. This is contrary to the print size used by the legislature and the courts. Use of fine print is unconscionable. Printing the initiative language in a manner which amounts to a “maze of fine print” is unconscionable and would not be tolerated if it was a contract. See, e.g. Schroeder v. Fageol Motors, Inc., 86 Wn.2d 256, 260 (1975).

According to the Secretary of State on their website in the “Frequently Asked Questions” area under the question:

If I am asked to sign a petition, am I entitled to read the petition or the proposed measure before I make up my mind?” – (Answer) “Yes. State law requires that petitions contain certain information, including the full text of the measure. This includes a ballot title and summary, written by either the Attorney General or a Superior Court judge, and other required information. The full text is usually printed on the back of the petition. Sometimes petition circulators attach the petitions to clip boards in order to make them easier to sign or easier for the circulator to handle. Sometimes the full petition or the full text of the proposal might be folded over or on the back. You should feel free to read any part of the petition that you think is necessary in order for you to make up your mind, even if that means unfolding it or removing it from a clip board. [Emphasis added].

Clearly, if it is impossible for voters and those considering whether they should sign the petition for I-1639 to be able to physically read any part of the petition itself because it is printed in an illegible or microscopic maze of fine print, then how would they know what they are signing? Obviously, due to the microscopic maze of fine print used by the initiative sponsors to disguise the actual language of the initiative on the back of their petitions, voters cannot be fully informed.

In this regard, it has been brought to our attention that not only are voters not able to read the petition when presented with the signature sheets by the paid signature gatherers, but when confronted by voters who can’t read the complete text of the initiative, the paid signature gathers tell the voters to “go to the website and read it there.” As you are aware, posting the text of the initiative on a website which may or may not be accessible to the voters is no substitute for following the law as required in RCW 29A.72.100. Multiple reports from multiple locations around the state have been received with similar observations, so it is possible this is a pattern of behavior possibly supported by your organization to obscure or deceive the public about the true nature and content of this initiative proposal.

Fortunately, this problem can be corrected, and a ready solution is available for you to become compliant with the law. Other initiatives have resolved this challenge of providing a “readable” copy of the initiative on the back of the petition by having fold-outs which would include the entire petition in readable form when they are as many pages and as lengthy as I-1639. While it is not up to my client to inform you how you can become compliant with the law, this appears to be the most likely immediate solution to ensure future signatures gathered are not invalidated by the illegal petition sheets you are currently using.

In the name of pursuing such an interest, the State would be free to require petition signers to disclose any information that would more easily enable members of the voting public to contact them and engage them in discussion, including telephone numbers, e-mail addresses, and Internet aliases.

Please note that we have copied this demand letter to the Secretary of State’s office, the Washington State Attorney General, and many other interested parties to ensure that everyone has been notified of the fundamental problem with your petitions.

Shawn Newman, on behalf of:
Second Amendment Foundation and Citizens Committee for the Right to Keep and Bear Arms

The Potential For Invalidation

SAF and CCRKBA asked the Washington State Supreme Court to invalidate I-1639 on the grounds that initiative organizers failed to follow state laws regarding petition parameters.

“We publicly warned the initiative sponsors about these problems and they ignored us,” Gottlieb said in a statement. “We are now taking the issue to the state high court to seek a declaratory judgment and injunction.

Court Commissioner Michael Johnston last week denied the pro-gun groups' motion for injunction. Johnston said the Court does not have the legal authority to order Secretary of State Kim Wyman to reject the petitions.

Wyman must accept any signatures that fall within RCW 29A.72.170's guidelines.

The initiative needs at least 259,622 valid signatures from registered voters, The Spokesman Review reported. According to initiative organizers, they have at least 360,000 signatures that have been submitted to the Secretary of State.

I-1639 is expected to make an appearance on November's ballot.