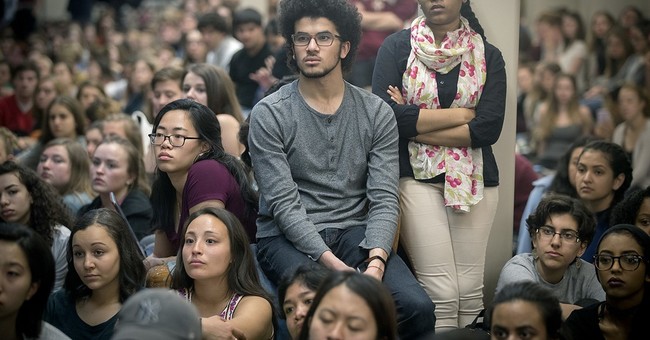 Brown University decided to change its graduate program's application process. The change would allow potential students to 'self-identify' as a person of color, The College Fix reported.

Apparently, the university decided to make the change after faculty complained that international and Asian American students weren't being "treated as members of historically underrepresented groups." Because of the lack of recognition, some students were missing out on invitations to multicultural events.

This policy is said to help the university reach its goal of doubling historically underrepresented groups by 2022, the Brown Daily Herald reported.

I'm so tired of colleges constantly trying to be diverse. They go out of their way to reward students with scholarships because of their heritage and their skin color.

Equality is in the Eye of the Beholder

As a conservative, I believe in the equality of opportunity. All of us have the opportunity to go to college. Yes, each of us has our own struggles and obstacles. But no one is discriminated against or told they can't go to college because of the color of their skin. No one is told they can't get a higher education because of their family's past. There's a clean slate for everyone.

When colleges and universities implement these dumb affirmative action rules all they're doing is picking winners and losers. Let me give you an example...

In high school, I was a good student. I graduated with a 3.49. I took Advanced Placement (AP) classes, and I was very involved in extra and co-curricular activities. When I applied for colleges, I received no financial aid. I fell into the trap of my parents "making too much money" (on paper) but not enough money to pay outright for my schooling. When I applied for scholarships, I was denied based on one of two principles: my parents' income or my race. I had two strikes against me. I'm middle class and white.

A classmate of mine had a lower GPA than I did, and she wasn't involved in extra and co-curricular activities. She received a full-ride scholarship and dropped out after one or two semesters. I ended up going to a smaller private school and taking out student loans, just like the majority of my peers.

A Disgrace to Opportunities in America

Policies like the one taking place at Brown University are a disgrace to everything America stands for. There are people who spend their whole lives wanting the opportunity to have access to everything America has to offer. Now, an Ivy League college wants to make sure that we're spreading our opportunities out "equally" to everyone. Except equality isn't really equal here. Instead, it means raising up minorities and burying others.

Minorities should also be offended by policies like these. Universities have such little faith in people of color that they think minorities need a leg up. A supposedly merit-based education is now coming down to nothing more than a person's skin color.

I'm sure MLK is rolling in his grave.