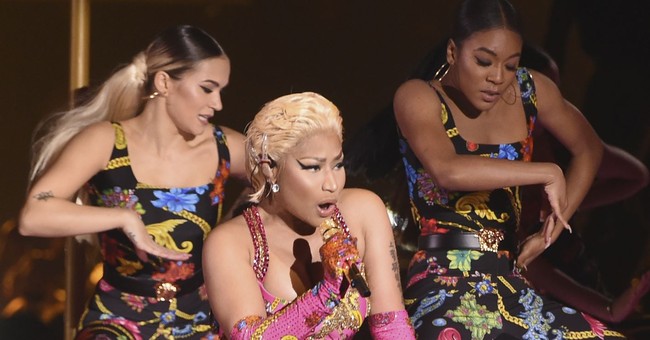 Nicki Minaj — of all people — is performing in a Saudi Arabian music festival on July 18.

Yes, one of the most profane and sexually explicit artists to exist — with musical milestones like repeating “Oh my gosh, look at her butt” 14 times in one song — is headlining in the ultra-religiously conservative kingdom that did not even allow women to drive until last year, according to the Associated Press.

Liam Payne and Steve Aoki will also be performing at the Jeddah World Fest.

In case you didn’t know, Minaj is an award-winning artist often considered one of the most influential female rappers in history — who also unabashedly admitted that she is “selling sex appeal” in her music. Some of her album covers feature her with next-to-nothing clothing to advertise her sexual features.

Meanwhile, in Saudi Arabia, women are forced to almost completely cover their features by wearing long, usually black, cloaks called the Abaya, in addition to a head covering, according to The Economist. If a woman fails to comply with the restrictive clothing rules, the country's morality police may punish her.

It is unclear whether Nicki will be required to change her appearances or song choice to comply with Saudi standards.

Given her support for women's rights and LGBTQ rights on social media, Nicki performing in Saudi Arabia looks somewhat hypocritical. Look below for some examples:

A woman can be a “freak” w|her man, sexual, spit explicit lyrics, an exhibitionist, love freaky girl talk w|her girlfriends, require men to treat her like a QUEEN, etc. NONE OF THAT EQUATES TO SELLING PUSSY. Now pop my dick outcho mouf. The Nicki hate train has left the bldng.

I ?? all my fans the same. All girlsRmagic. Don't ever 4get that my darlings. Str8. Gay. Jewish. Muslim. Asian. Black. White. Spanish, etc ??

Several people criticized Nicki's decision to headline a music concert in a country known for flagrant human rights abuses, while others asked her to use her platform to speak up about the kingdom's injustices.

Hi @NICKIMINAJ - if you visit #Saudi PLEASE speak out against detention of women activists & the guardianship system that bars women from traveling & marrying without permission. And please don’t let yourself be used to whitewash Saudi war crimes in #Yemen https://t.co/NX9U15W8JA

@MTV, LIAM, STEVE, NICKI, What does this event mean to you? The Saudi Prince has his citizens silenced, tortured and murdered and YOU ALL act like everything's normal? If you do this, you're telling the world you're fine turning a blind eye to all of it. https://t.co/IrZtYyy7RY

All-and-all, this is a rather dizzying development. Too bad we can’t consume alcohol at the Jeddah World Fest to calm our senses as Nicki twerks her derrière in the hot Saudi sun.

Fauci: If we can safely shop at the grocery store, we can safely vote in person
Hotair
FBI Attorney Clinesmith Did NOT Enter a Guilty Plea On Friday To the Filed Information — That Is Not Normal
Redstate