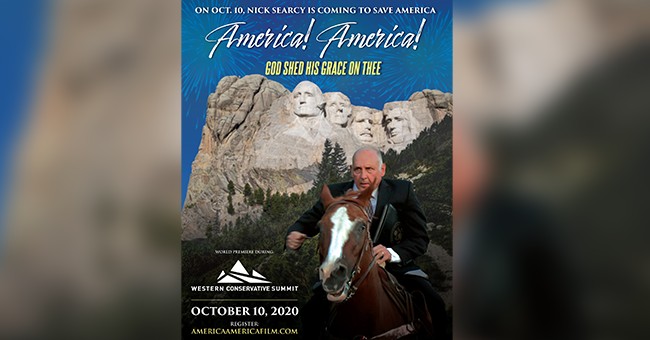 Actor, producer, and director Nick Searcy has a brand new documentary set to premiere next weekend in California at the Western Conservative Summit.

Searcy, who is known for his outspoken defense of conservative and Christian values, has been praised for his work behind the camera in recent years, directing and starring in Gosnell: The Trial of America's Biggest Serial Killer. He is also widely known for his starring role in the television show Justified as well as movies like Cast Away and The Shape of Water.

His new venture, America, America, God Shed His Grace on Thee, features a collection of interviews with top leaders from Capitol Hill and leading minds in conservative punditry discussing the state of Godliness in American politics.

"This powerful film explores the importance of the Bible in the formation of America and why our country needs to return to the teachings of the Bible," the official description reads.

The film is produced by Searcy in collaboration with the Centennial Institue and the Western Conservative Summit.

"The Ten Commandments: right there on the building," Searcy says on the video, standing on the steps of the Supreme Court. Moses is chiseled as a pediment above the nation's highest court, holding the tablets that bare the commandments of God.

Texas GOP Sen. Ted Cruz, also featured in the movie, is shown discussing just how potent and vital the idea of religious liberty was to the founders.

"Endowed by their Creator, with certain unalienable Rights," Cruz quoted from the Declaration of Independence. "Among these are life, liberty, and the pursuit of happiness. That proposition was radical."

Hang on. Help is on the way. pic.twitter.com/9brLDsfyAB

Searcy told Fox News earlier this month that although the film's running time is on the short side, just one hour, it covers one of the most important discussions in America.

"It's a film that tries to tell the story of the relationship between God and America, from it's founding until now -- in one hour," Searcy said. "It's a pretty ambitious project."

One promo for the film was flagged by YouTube for containing what the Google-powered video sharing site deemed as "sensitive content." Searcy told Fox News that the content warning only confused him, given the nature of the movie.

"Basically, the only thing we could possibly figure out that might have been sensitive or graphic is, there are about four seconds of actual riots that are happening in America -- and the rest of the time it's just people talking about the Bible," he said. "So I don't know which of those two things they found so offensive but it was one of the two. It couldn't have been anything else."

The film features interviews with many well-known voices, including Sen. Cruz, HUD Secretary Dr. Ben Carson, Alveda King, Ben Shapiro, and the final interview with Herman Cain before he passed away earlier this year. Searcy said the chance to interview Cain was an "incredible experience."

"In the film, we give people an idea, in a short time, what Herman Cain was really like and what a wonderful man he really was," Searcy said. "He was more than just a politician or businessman. He was a hilarious, fun person just to be around and I think we get that across in the movie."

Searcy said that even beyond Cain, humor can be found throughout the film, despite its heavy, hot button subject matter.

America, America, God Shed His Grace on Thee will premiere on October 10 at the Western Conservative Summit.