Rapinoe: I 'Held Up My End of the Bargain' With Trump 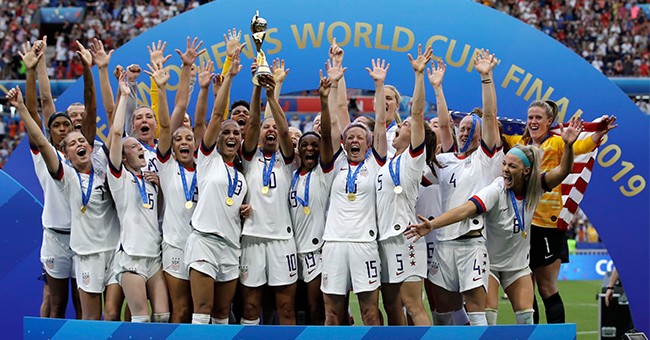 The U.S. women's national soccer team is back on home soil following its victorious World Cup run in France. The last time the team was in this position, in 2015, it couldn't wait to celebrate with President Obama. But, it's a different story this year. Megan Rapinoe, one of the most vocal and recognizable players on the team, has already told the press she's "not f***ing going" to Trump's White House. As one of the openly gay players on the team, she doesn't believe Trump represents LGBT citizens. It's one of the reasons she's also refused to recite the national anthem. Trump responded to her on Twitter, insisting she was getting ahead of herself. She had to actually win the tournament first before he offers them an invitation.

In a joint interview with teammate and co-captain Alex Morgan on ESPN on Tuesday, Rapinoe insisted she's "held up her end of the bargain." Morgan also chimed in and said, "it's clear who won" the battle.

Morgan also addressed the team's White House controversy upon their return on Monday. A Trump invitation is probably not one she'd accept, she said, because she "doesn't stand for" many of the policies he's enforced.

These are the Trump policies Alex Morgan "doesn't stand for" pic.twitter.com/YCZCKP8DwM

The other players are being just as reserved in regards to a potential White House visit.

"It's a conversation we need to have as a team," Kelley O'Hara said on CNN on Tuesday.

Former U.S. World Cup champion Julie Foudy expects that there are "a couple" of people on the team who do believe they should visit the White House, but it needs to be a collective decision.

Trump has yet to extend an invitation, but House Speaker Nancy Pelosi and Senate Minority Leader Chuck Schumer, have offered the players one of their own. Pelosi was pleased to invite the players to Capitol Hill "by popular demand on both sides of the aisle," she announced.

But again, the players said they need to have a conversation. They haven't had much time to do that, considering their whirlwind media tour.

"Of course, it would be great to do something as a team together like that, but we haven't even had time to talk about that," Morgan said.