'12 Strong’: A Movie For Anyone Who Wanted Immediate Revenge After 9/11 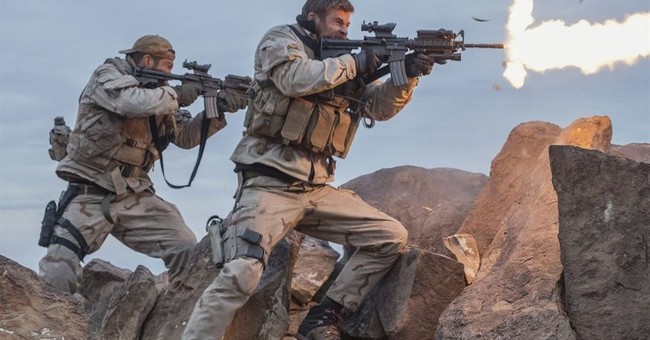 We give it: 5/5 stars (I considered knocking a half star off for Hemsworth's not-so-convincing Kentucky accent, but I let it go.)

In the hours and days immediately following the September 11 attacks, many Americans wanted to gear up and fight back. Green Beret Mark Nutsch and 11 of his fellow soldiers had the privilege to actually do it.

Their intent was simple: "Getting back at those who had just murdered 3,000 American and international citizens on American soil," Nutsch told Townhall.

The new film 12 Strong: The Declassified True Story of the Horse Soldiers is loosely based on the now declassified mission in Afghanistan after the 9/11 attacks.

On September 12, 2001, 12 Green Berets saddled up (literally) for Operation Taskforce Dagger to ride into battle against Al Qaeda and Taliban operatives in Afghanistan. They completed their initiative. It’s a miracle of a story that was unsurprisingly picked up by some heavy Hollywood hitters. The film is directed by Nicolai Fuglsig, produced by Jerry Bruckheimer and led by a cast that includes Chris Hemsworth, Michael Shannon, and Michael Peña.

Nutsch is portrayed by Hemsworth in the film, though with a different name.

"Our command did not expect us to survive the mission," Nutsch explained. "But we had to send someone in there to get answers.”

A tall task it was, but somehow the team defied all odds. Not only did every man make it back alive, but they did it in record time. A mission that was expected to take two years, took these 12 men just three weeks.

The movie helps explain why. These guys had heart. Images of Chris Hemsworth leading his team bravely into battle on horseback will remain with you after the film, as well as the bond he forms with Uzbek leader Dostum as they fight to take back the country from heartless terrorists. Don't even get me started on the soldiers' homecomings, which offered glimpses of those yellow ribbons we all tied around the trees in our yards. I teared more than once.

You may be surprised to learn that one of the film's consistent themes is humor. It is a bold, and rewarding choice that pays off immediately.The brothers in arms never cease joking with one another and with the local militias with whom they unite. One of the funnier moments is when one of the local militia leaders does not become friends with the Americans until they give him vodka. Or, when Michael Peña's character tries to barter with a greedy sheep farmer. "You should be a military contractor," he quipped to the local. The laughs entertained the audience, but the humor seemed to have a larger goal – it portrayed just how confident these men were in their mission.

“Never once did we think we weren’t going to come home,” Nutsch recalled. “We relied upon our training and our own resilience to bounce back day after day.”

Not to mention, these men did it with minimal time to prepare.

“There is no playbook here,” Hemsworth’s character says in the film. “We're gonna have to write it ourselves.”

“We had some time to study specifically about Afghanistan but there was so little that was known,” Nutsch recalled. “So many unanswered questions. The command realized the only way to get those questions was to send someone in on the ground.”

“It was like being on the first landing craft on Omaha beach or something during D-Day in Europe,” he remembers. “You didn’t know how things were going to work out.”

They were facing a larger, better equipped force. Yet, what "tipped the scales" for the Green Berets and local allies was their giving out coordinates and calling in air support to bomb and capture key areas.

Their Green Beret training prepared them for unconventional warfare, but that didn’t exactly help when it came to riding horses. Unfortunately, that was the best way to get around the rugged terrain of Afghanistan.

“Some of the guys I think still have saddle sores,” Nutsch joked. “You have physically fit Green Berets riding these half wild animals that want to buck you off and we’re trying to conduct military operations with that as our main mode of transportation."

Still, the horses were their advantage because it gave them greater mobility than the enemy. Nutsch himself grew up on a cattle ranch and was comfortable with the animals, but he commended his fellow men for adapting very quickly to their new transportation.

The film captures these challenges and the essence of what it is to conduct a special operations mission, Nutsch said.

“Overall, I recognize the real experience we had in a number of scenes,” he said. “This film portrays the spirit of the special forces team in that historical moment in American history.”