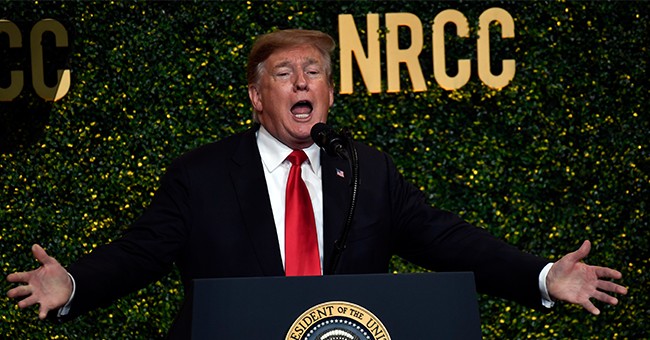 Warner Bros., the film production company behind DC, Looney Tunes and "The Lego Movie," has gone to battle with President Trump on legal grounds. The president recently shared a video on Twitter to build up his 2020 campaign. Of note, the music in the video is from Christopher Nolan's "The Dark Knight Rises."

The 2-minute video, posted on Tuesday evening, was accompanied by the headline "MAKE AMERICA GREAT AGAIN!" According to the Hollywood Reporter, the video was viewed over 2 million times before being removed by Warner Bros.

In a statement to the Hollywood Reporter, the company denied that they had permitted the president to use their score.

“The use of Warner Bros.’ score from “The Dark Knight Rises” in the campaign video was unauthorized,” read the statement. “We are working through the appropriate legal channels to have it removed.”

According to The Washington Post, the clip isn’t an official campaign product, but the work of a Trump fan who posted the video to r/The_Donald on Reddit. The subreddit is infamous for being a meme playground for Trumpers. The original video was unfortunately still blocked by Warner Bros. on YouTube.

Several other people have had fun with the surreal video on Reddit forums.

So far, Trump hasn’t said anything about the video’s removal and the Reddit thread on r/The_Donald has been locked by moderators only five days since the videos' original posting. The entire page the Tweet was originally on was completely deleted Wednesday morning. Thankfully, though, somebody provided a mirror video so you can view it here.