Young Voices Contributors
|
Posted: Apr 03, 2021 12:01 AM
Share   Tweet
The opinions expressed by columnists are their own and do not necessarily represent the views of Townhall.com. 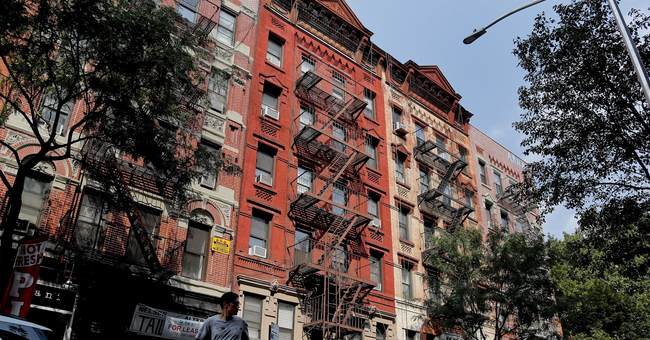 Editor's Note: This column was authored by Emilie Dye.

No one likes to think about people being unable to pay rent and losing their homes. But as I learned in high school reading Henry Hazlitt, “The art of economics consists in looking not merely at the immediate but at the longer effects of any act or policy; it consists in tracing the consequences of that policy not merely for one group but for all groups.” And the eviction moratorium, which the CDC extended this week for the second time, completely ignores landlords.

Since September 2020, the government has essentially forced landlords to subsidize their renters' living situations, and now they are going to have to shoulder the loss of their tenants' rent through the end of June.

What’s a couple more months, right? Well, as of December, landlords had lost between $30 and $70 billion in rental income. They’ve lost much more since then. The government is estimating renters will need $46 billion to pay for rental costs and has allocated that money in assistance. But previous payments fell woefully short.

This has to stop.

The government caused the housing crisis when it implemented the restrictions that caused many to lose their jobs. Now it’s casting all responsibility for the economic disaster onto landlords. It’s neither humane nor helpful.

A lot of people lost their incomes as a result of COVID-19. State governments locked down whole sectors of their economies leaving many without a leg to stand on. Huge swaths of citizens find themselves dependent on welfare payments which, in most cases, cannot make up the total amount they’ve lost.

But it’s tough all around.

Just because times are hard for one group doesn’t make it OK for them to take from another group. And that’s precisely what the eviction moratorium does, by transferring the full weight of economic loss from renters to landlords. The eviction moratorium doesn’t say, ‘we are all in this together.’ It says, ‘some people are more deserving of help than others.’ Currently, between 11 and 30 million households have benefited from this new lack of consequences for falling behind on rent. That’s up to 30 million landlords who’ve had to bear the brunt of pandemic-related loss.

Normally, renters that were unable to pay their rent would simply need to move to more affordable housing. Sure, lockdowns make moving more difficult, but that should never have been impossible. Policies should recognize finding housing is essential — even in a pandemic.

That may seem like a calloused perspective; after all, what does “affordable housing” look like for blue collar workers who through no fault of their own find themselves laid off and living on unemployment? Yet the truth is such laissez faire policy, if it had been left to play out at the beginning of the pandemic, may have resulted in better outcomes for landlords and tenants alike.

While moving due to economic distress is not ideal, when it happens to a large enough group of people, the market adjusts. That’s what happened in Australia where I currently live. My apartment prior to COVID-19 cost $720 a week, now it only costs $565. My landlord even threw in a free car spot.

Without the eviction moratorium, U.S. landlords would have lost a portion of their income. Now, they’ve lost all of it, and they still bear heavy risks including damage to their property and high utility bills. Some landlords are choosing to leave their apartments empty fearing if they try to rent out their space they will find themselves stuck paying for another person’s housing as has happened to many.

In a normal year, 41 percent of properties experience a vacancy of some sort. Under the moratorium, landlords are incentivized to keep those properties empty. When the number of available homes drops but demand remains the same, only those willing and able to pay the most get the housing. Instead of allowing renters to receive a sizable discount on their rent, the government has put forward a feel-good restriction that hurts more than it helps.

Some renters pay unnecessarily high rents and landlords lose their income, while a small group benefits. Across the U.S. rental prices have stayed mostly the same as they were before the pandemic, and in some areas they have even increased. The Washington, D.C. area saw a 4 percent increase in rents compared to the same time last year. Both reliable renters and faithful landlords end up with less money to spend, and so the economic crisis deepens.

Those people bearing the brunt of this policy are in many cases no better off than the people benefiting. Of the 17.7 million properties yielding rental income, 16.7 million are owned by ‘mom and pop’ landlords, not real estate moguls. These landlords are ordinary people who’ve lost jobs, businesses and loved ones to the virus, just like everybody else.

And now they have lost their rental income (25 percent of landlords depend entirely on rental income). Many still have mortgages to pay. Some are retired and living off the rental income from a house they spent a lifetime saving for. The eviction moratorium doesn’t help people; it only transfers the burden.

Instead of extending the moratorium, Biden should lift it and let the market adjust to normal levels.

Emilie Dye is the Executive Director of the HR Nicholls Society and the Policy Director for the Australian Taxpayers Alliance. She is a contributor to Young Voices. Find her on Twitter @Emilie_Dye.