Young Voices Contributors
|
Posted: Jan 23, 2021 12:01 AM
Share   Tweet
The opinions expressed by columnists are their own and do not necessarily represent the views of Townhall.com. 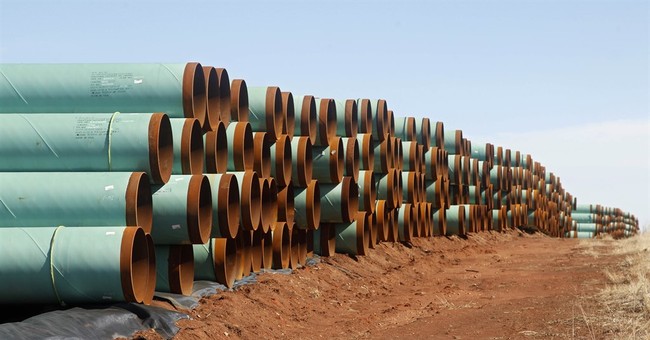 Editor's Note: This column was authored by Nick Lindquist.

What if I told you there was a way to transport oil and gas in a way that minimizes environmental risk, reduces carbon emissions, and generates more economic activity? Well, there is—it’s called the Keystone XL pipeline and Joe Biden canceled it on his first day in office.

The Keystone XL is a 2,000-mile pipeline project that would transport oil from Alberta, Canada all the way to Texas for refining. The project has faced pushback through the whole process. From President Barack Obama rejecting the permit requests to contentious court battles, the issue of what to do about Keystone XL never seems to escape the news cycle for very long.

The Trump administration permitted the construction in 2017 and the project continued. However, with the Trump exit, the continued project development did not stand to last. As of Wednesday, his first day in office, President Biden canceled permits for the Keystone XL pipeline. This action poses a new question: why?

One could speculate it is due to environmental or climate concerns, but when you look at the data that narrative doesn’t add up. Pipelines can drastically reduce the amount of CO2 emissions needed to transport fuel. According to a study by the University of Alberta, pipeline transportation of large amounts of crude oil can reduce emissions by 61 to 77 percent less than by rail. Furthermore, TC Energy Corporation, the company that owns the pipeline, has pledged to power operations with 100 percent renewable energy by 2030.

Anti-Keystone advocates also repeatedly insist over and over that pipelines leak, posing a greater risk to the environment than other modes of transportation. Of course, this, too, is a myth. When you look at oil spill data between rail and pipeline transportation, that becomes all too clear. The International Association for Energy Economics found oil transportation by rail to be a greater environmental risk than by pipeline when measuring spill frequency and the barrels of oil lost in each spill.

The economics of this move doesn’t add up either. According to TC Energy Corp., Keystone XL would sustain 11,000 well-paying jobs in 2021. By Biden canceling the permits, these jobs will be in jeopardy in the middle of an economic slowdown brought on by the pandemic. Additionally, the pipeline generates a lot of tax revenue and economic activity for the states it passes through. In Nebraska alone, the construction and operation of the pipeline from 2013 to 2029 were projected to provide $1.8 billion in economic activity and hundreds of millions in tax revenue.

None of the cliche reasons for canceling this project add up when you examine the facts behind them. So, why does Biden want to cancel the project despite claiming he will always “listen to the science” as president? Put simply, Biden is bending to the cries from the far-left of the Democratic Party to make this move. From interest groups to politicians, progressives have been against the project every step of the way—regardless of the facts in front of them.

Joe Biden canceling the Keystone XL pipeline despite it being the most efficient way to transport fuel demonstrates that he doesn’t truly care about crafting sensible policy. He will do what he has done over the course of his whole career: swim with the current, no matter where it leads.

The effects of canceling Keystone XL go far beyond simple numbers and dollar signs—they extend into the lives of all Americans. Canceling this project will mean newfound hardship in the midst of a recession for energy workers, struggling families who need affordable power, and “flyover country,” all of which contradicts Joe Biden’s key message of “unity.” If this is any indicator of how the Biden administration intends to govern for the next four years, conservatives are in for a tough ride.