The War on Cigarettes 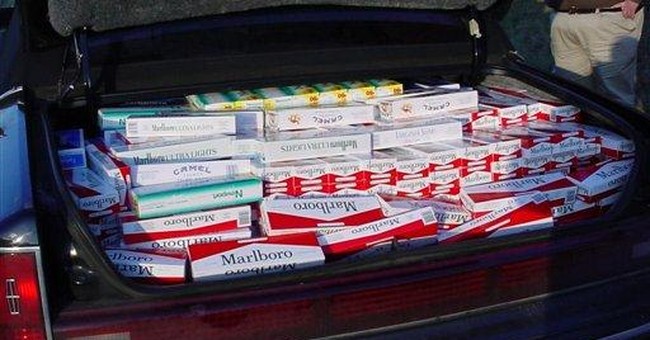 Add another chapter to the long and voluminous history of government’s failed “Vice Wars.” Just like Prohibition and the so-called “War on Drugs,” the ongoing cigarette crackdown in both the United States and Canada has not only failed to achieve its objective, but it is creating bureaucracies that threaten liberty and prosperity as well as spawning a violent subculture that puts lives at risk on both sides of the border.

And the more this “sin” tax is raised, the more lucrative profits from contraband cigarettes become – adding fuel to an already-volatile conflagration.

Did we really expect government to do anything differently, though? After all, we’re dealing with a government culture that continues to operate under the fatally-flawed assumption that anything can be solved simply by borrowing and spending more tax dollars. In fact, in today’s world unsustainable borrowing and spending itself can be solved by – you guessed it – additional borrowing and spending, all in the name of “economic development.” Is it at all surprising, then, to discover that our politicians are resorting to the same failed “solutions” of the past in prosecuting their war on cigarette smoking?

For starters, the same vicious cycle that brought us Al Capone and his band of murderous thugs in the 1920s – and which made Pablo Escobar one of the richest men in the world in the 1990s – will be back for another bite at the taxpayer-funded apple. Just last month in Virginia, for example, a contraband cigarette smuggler pleaded guilty in court of hiring a hit man to murder two people that he suspected of stealing his bootleg cigarettes. According to media reports, the man’s gang was hoping to make a cool $1 million by selling nearly 400,000 cartons of cigarettes in New York City – where taxes alone on a pack of smokes are $4.25. Amazingly, New York lawmakers are seeking to add another $1 to this already obscene amount, an increase which will only fuel additional bootlegging – and additional violence.

“New York has a long, bloody history of cigarette tax evasion,” writes Patrick Fleenor of the Tax Foundation. “Serious problems began in the early 1960s, when tax hikes caused organized crime to ruthlessly push aside competitors and dominate the racket. By 1967, a quarter of the cigarettes consumed statewide were bootleg, and the problem was much worse in New York City.”

Meanwhile in Canada – where exorbitant taxes have pushed the price of brand-name cigarettes over $10 per pack – the purchase of contraband cigarettes doubled from 2007 to 2008.

As a result, Canadian authorities are also facing an increase in organized crime as well as fewer people giving up the habit thanks to the availability of cheaper cigarettes. Suggestions to lower taxes have fallen on deaf ears, however, and beginning on July 1, cigarette taxes in British Columbia will actually increase - to $60 on a $96 carton.

Once again, government is doing the same thing and expecting a different result – which of course is Einstein’s famous definition of insanity.

“Government policies should suppress crime, not encourage it,” Fleenor says. “Bootlegging could be eliminated overnight by relying on broad-based, low-rate taxes—such as those on income, property and sales - rather than on high taxes on easily transportable goods.”

Faced with clear and compelling evidence which proves conclusively that decades of tax hikes have only compounded the problems associated with contraband cigarettes, governments in Canada and the United States are continuing to pursue the same failed solutions. Rather than cutting taxes and let the marketplace do its job, they’re betting our money – and our safety – on an approach that they know doesn’t work.

The only question isn’t ‘when’ these tax hikes will fail, it’s how spectacularly and expensively they will fail – and how many lives will be lost in the process.