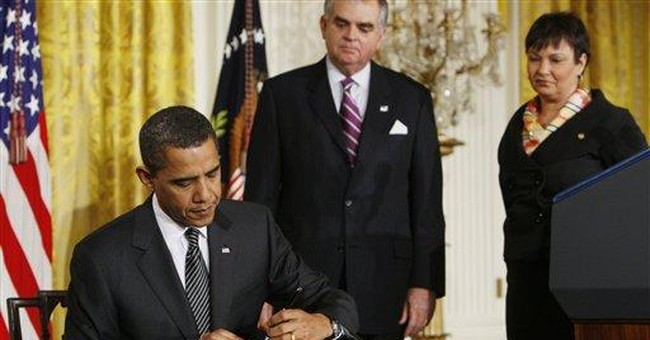 When one president succeeds another (whether they come from the same party or different parties), they traditionally get together, in or about December, for a private chat.

I have always wished I could be a fly on the wall at one of these get-togethers, for they must be fascinating. Once the pleasantries are out of the way, the outgoing president must surely have a lot he wants to tell the newcomer. He has, after all, been privy for at least four years to all sorts of classified information that will be news to his successor. And not all of it, by a long shot, will be good news.

The new president will have been acting on the basis of far less information than the incumbent. In all likelihood, he will have based his campaign in part on policies that may, from the perspective of the sitting president, have been inadvisable or downright disastrous. In the course of that campaign, he may have made pledges that now, in the light of new, highly classified information, seem undesirable or impractical. All in all, the new president is likely to leave his session feeling that the presidency is going to be a lot more complicated than he anticipated.

In a few weeks, of course, the new chief executive will settle into the job and start coping with its difficulties --anticipated and otherwise. But he is not likely to forget the hollow feeling he felt in the pit of his stomach when he learned some of the disagreeable facts that were somehow missing from his campaign platform.

That must be the experience that the freshly minted President Obama is feeling about now. Suddenly, withdrawing our troops from Iraq turns out to involve consequences that somehow never got anticipated, let alone mentioned, in those heady days on the campaign trail. And all those pledges of tax reductions fly squarely in the face of the spending obligations to which the new administration is committed. Choices will have to be made, and the disappointment of those whose promised expenditures don't make the cut will be deep -- and politically painful.

This, I repeat, is the experience of just about every incoming president, and Obama will be no exception. Thus will be laid down the first layer of disappointment with his performance as president. The Republicans, predictably and understandably, will seek to take advantage of the resulting frustration.

In the case of Iraq, in particular, Obama will face an especially difficult choice between equally objectionable options. He is certainly identified with the case for pulling out of Iraq altogether. And yet, unless the nearly unanimous judgment of both the military and diplomatic communities is mistaken, doing so will unsettle the international situation there in ways potentially as alarming as they are unforeseeable. From Egypt to Iran, the political and military consequences are almost bound to be enormous, and coping with them, militarily and otherwise, is likely to be the work of decades.

Yet it seems almost impossible, simply as a political matter, for Obama to reverse himself and decide to continue the war in Iraq. His word on the matter is on the line, and going back on it would inflict a deep wound on his credibility. No president can well afford to lose his reputation as a man of his word.

So we are probably in for a period of shuffling, in which two steps back in Iraq, such as reducing our troop levels there, are followed by one step forward, such as offering further support, in one way or another, to the Iraqi government. Whether this can be shaped into a coherent policy is very much in doubt, but it seems inevitable that Washington is going to try.

Joe Biden Reportedly Having Trouble Keeping Up with Everyone Else at G-7 Summit
Townhall
'We're in incredible danger': The GOP's assault on education and history is based in Nazi ideology and obsessed with protecting white supremacy
Twitchy
EXCLUSIVE: Defector Provides Evidence That the Chinese Military Orchestrated the Creation of COVID-19 and Lab Leak
Redstate
Dementia Joe Forgets Where He Is Again
PJ Media