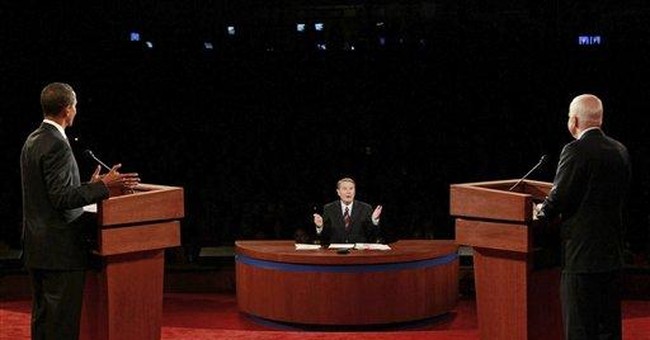 The first televised debate between John McCain and Barack Obama probably came out evenly enough to enable both sides to claim victory -- which is, of course, exactly what they did.

Certainly, neither man was obviously and overwhelmingly the winner. Both were in command of their material and ably defended their views.

Several people to whom I spoke after the debate mentioned that McCain had not looked directly at Obama, whereas Obama did speak directly to McCain. Personally, I hadn't noticed this, but I am sure the observation is correct. Whether it matters is another question. McCain was no doubt mindful of the huge audience of millions of television viewers who were listening and was anxious to engage them directly. But, of course, the direct object of his remarks was Obama.

One of Obama's early comments on the subject of the economy sounded critical of "the market" and implicitly favorable to "regulation," which is the usual liberal mantra on that subject. McCain followed with a sharp attack on excessive government "spending," which is the conventional conservative complaint on that issue. Thus far, both debaters were hewing faithfully to positions with which their supporters are familiar and feel comfortable.

McCain, following up his attack on the evils of spending, then called for a "spending freeze," and Obama neatly changed the subject by suggesting that we "save on Iraq" -- i.e., cut expenditures by eliminating the heavy cost of the Iraq war. That brought up the whole issue of Iraq, to which the debate now inevitably shifted.

McCain declared confidently that we will win in Iraq. Obama replied that he had opposed the attack on Iraq from the start, and he believes we should cut back our efforts there and concentrate on finishing our military operation in Afghanistan.

McCain countered that Obama had opposed President Bush's decision to launch a "surge" in Iraq, contending that it wouldn't work, when in fact it has worked remarkably well.

And so the evening went, with each debater seemingly well prepared for the other's thrusts. There is no space, in this column, to list all of the attacks made and all of the rebuttals offered, but I can't honestly say that, when it was over, I felt that either debater was massively ahead on points.

There are two other debates ahead, and it may well be that one debater or the other will clearly stand out as the winner of one or both. At the moment, however, after the first debate, it seems to me that the protagonists are still pretty close to even.

Of course, it is fair to ask just how much these debates matter. If the voters clearly prefer one candidate over the other, that preference may simply overwhelm any benefits his adversary may gain by doing better in the debates. But the polls seem to show the race as extremely close so far, with the candidates almost exactly tied. In that situation, a good showing in the debates is going to be important and, quite possibly, decisive.

So the remaining debates are going to be worth watching. One may wonder whether it is entirely fair for so much to depend on which candidate has the smoother delivery. There are, after all, other attributes at least as important in a president. But this is, for better or worse, a democracy, and how well a candidate can put his case is a pretty fair test of the man.