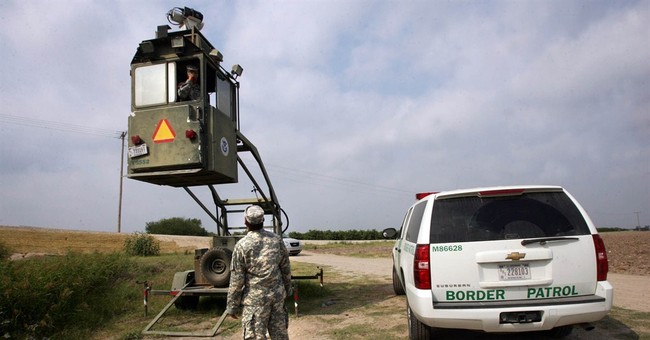 “Out of sight, out of mind.” For most, that describes the U.S.-Mexico border. We have no idea what’s going on down there so we just ignore it. But, very bad things are happening. Things that affect the survival of America, the survival of your job, and the safety of your family.

As Obama’s college classmate at Columbia University, Class of ’83, he heard and learned the same ideas that I did from our Marxist professors… a brilliant plan to overwhelm the U.S. economic system and bring down capitalism. It was called Cloward-Piven.

The plan involved overwhelming the economy with spending, entitlements and debt to collapse the U.S. economy, thereby killing capitalism. Cloward-Piven’s stated goal was to “fundamentally change America” in the name of fairness, equality and most importantly, social justice.

Sound familiar? Those are the same words used by Obama and his allies in Congress. And this exact Obama’s exact gameplan is being carried out right in front of our eyes. The number one weapon being used to bankrupt and collapse our economy is the open border with Mexico.

It all starts with illegal immigration. The media would have you believing it has slowed. Wrong! Illegal immigration isn’t slowing, it’s exploding and accelerating beyond your wildest imagination. This September ended with nearly twice the amount of illegal aliens caught at the border as one year ago.

Why is this important? Because the costs of welfare, education, free meals at school, food stamps, housing, healthcare and even providing lawyers free of charge to each illegal is overwhelming the system. America is being invaded by huge numbers of poverty-stricken, unskilled, desperate, government-dependent from cradle to grave, masses of humanity that are busting our budget. My Columbia classmates would smile and call it “overwhelming the system.”

Many of these illegal’s flowing over the border are committing violent crimes. Your family could be the next victim. The media tried to destroy Donald Trump for reporting a fact- some (not all) of these illegal aliens are here to commit murder, assault, rape, join gangs and sell drugs. They are overwhelming the system with the costs of police, public defenders, courts and prison cells.

But none of this is the worst problem produced by a wide open border: terrorism.

Terrorists are able to mix and mingle with the masses of illegal aliens and slip by unnoticed. I’ve been warning about the risk of radical Muslim terrorists crossing the border for over a year now in my many media appearances.

Well my prediction is no longer a fear. It is now a fact.

My trusted insider source at the U.S. Customs & Border Protection Agency called me only days ago to implore me to “imitate Paul Revere” and tell the American people before it’s too late. Quote… “We don’t need to wait for Middle Eastern military-age males to invade our border. They are here.”

Here is the news this trusted border agent reported to me:

First, the US government has received an urgent alert from Mexico that Syrian military-age males are in Mexico, headed for the US border. U.S. border agents are on extreme high alert.

More alarm bells were set off by the capture only days ago of eleven Pakistanis at the San Diego border. To make matters more alarming, my border agent source says Mexico confirmed all entered Mexico with Pakistani passports. But when captured crossing the border they suddenly had no passports. Why were they trying to hide their country of origin? Were they trying to blend in as “just more Mexicans crossing the border” so as to not set off alarm bells?

Only days later, I received a new urgent message from my trusted border agent friend. Six more Pakistanis were captured crossing in the same spot. This is no longer a “coincidence.” This is a pattern and a new threat against our homeland.

Folks, this is bad news. If seventeen Pakistanis were captured within days, how many more have evaded capture? Are there hundreds already in the USA? How many more are on the way? Will our border soon have a massive illegal Muslim immigrant crisis just like Europe?

My source warns this is “the real thing.” These are very likely bad guys allowed into our country due to Obama administration open border policies. Here’s the million-dollar question: Who is sending military-age males from Middle East or South Asia terrorist zones to America? Who is paying for them? Is ISIS footing the bill?

Our government has made no announcement of these alerts and incidents. Connect the dots. Our borders are open. Thousands of miles are poorly guarded. There is no wall. There aren’t enough border agents. And, bad guys from the Middle East know it. They will send thousands of bad guys our way, knowing only a few need to get through. We face imminent grave danger.

How do dirt-poor Middle Eastern military-age males get to Mexico? They can’t walk. It costs thousands of dollars to be smuggled from Syria or Pakistan halfway around the world. If it isn’t ISIS or Al Qaeda paying their way, why is it primarily military age males and not women or children? The common sense answer is because this is a coordinated attack on America.

Until our borders are secured…until a wall is built…until drones are placed along the border…America faces death by a thousand cuts: whether from budget-busting poverty stricken illegals busting the budget; violent illegal aliens overwhelming the police, court and prison system; or from terrorists out to destroy America.

America -- You are not safe. Your children are not safe. Our economy is not safe. One more massive 9-11-like terrorist attack in the middle of an “Obama economy” (already on the verge of collapse) and we all face economic Armageddon. Our enemies know that.

Why would any president do nothing about a wide-open border with bad guys flooding across?

Are we being destroyed from within by a purposeful plan to overwhelm the system?

And what are American patriots going to do about it?