Walter E. Williams
|
Posted: Oct 19, 2016 12:01 AM
Share   Tweet
The opinions expressed by columnists are their own and do not necessarily represent the views of Townhall.com. 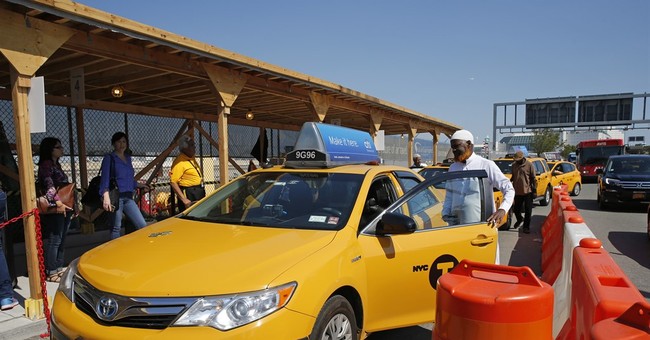 Trending
If a person wants to go into business as a taxicab owner, what requirements should be imposed to protect the public? The prospective taxicab owner should show that he is honest and can operate a vehicle safely. His vehicle should pass a safety inspection, and he should have a liability insurance policy. Some cities require the purchase of an existing license, sometimes called a medallion. A medallion has cost as much as over $1 million, as in the case of New York City, and the cost has reached $700,000 in Boston and $360,000 in Chicago. There is no public protection interest served by forcing a person to go into debt to purchase a taxi medallion, but doing so does serve an interest.

Before we talk about that, let's look at some good news for prospective taxi owners. The Arlington, Virginia-based Institute for Justice is a nonprofit libertarian public interest law firm that has been on the forefront in the fight for economic liberty for 2 1/2 decades. During that time period, it has piled up numerous victories. The most recent is its Oct. 7 win in the 7th U.S. Circuit Court of Appeals, which issued two groundbreaking decisions that will help cities to sweep aside protectionist transportation regulations in order to make way for new entrepreneurs.

The first case originated in Milwaukee, where Joe Sanfelippo Cabs, the city's largest taxicab operator in the city, filed suit claiming that the city had violated both the U.S. Constitution and Wisconsin state law when it lifted a long-standing cap on the number of taxicabs it would allow to operate. Of course, Joe Sanfelippo Cabs wanted to keep the number of taxis limited so as to maintain monopoly power and gain monopoly wealth. The second case originated in Chicago, where incumbent taxicab operators sued the city for permitting ride-hailing services such as Uber and Lyft to operate. The plaintiffs charged that because city officials did not go out and arrest Uber and Lyft drivers, taxicab owners' rights under federal and state law were violated.

Writing for the court in the case that challenged Milwaukee's removal of a cap on the number of taxicab medallions, Judge Richard Posner wrote: "The plaintiffs' contention that the increased number of permits has taken property away from the plaintiffs without compensation, in violation of the constitutional protection of property, borders on the absurd. Property can take a variety of forms, some of them intangible, such as patents. But a taxi permit confers only a right to operate a taxicab (a right which, in Milwaukee, may be sold). It does not create a right to be an oligopolist, and thus confers no right to exclude others from operating taxis."

In the Chicago case, Judge Posner, who is very knowledgeable about economics, applied the great economist Joseph Schumpeter's notion of "creative destruction." He explained that Uber, Lyft and other companies that are wreaking destruction on the old taxi cartel are examples of companies engaging in a natural part of free market behavior. Posner wrote: "When new technologies, or new business methods, appear, a common result is the decline or even disappearance of the old. Were the old deemed to have a constitutional right to preclude the entry of the new into the markets of the old, economic progress might grind to a halt. Instead of taxis we might have horse and buggies; instead of the telephone, the telegraph; instead of computers, slide rules. Obsolescence would equal entitlement."

Some city officials gain from taxi monopolies. New York Mayor Bill de Blasio says he's against more taxis because of traffic congestion. However, it could be because New York's taxi industry contributed more than $550,000 for de Blasio's mayoral campaign. And whose side do you think black politicians and civil rights organizations are on, the side of incumbent taxi owners and taxi unions or the side of prospective taxi owners who have the physical means to get into the taxi business but not hundreds of thousands of dollars to buy a medallion?