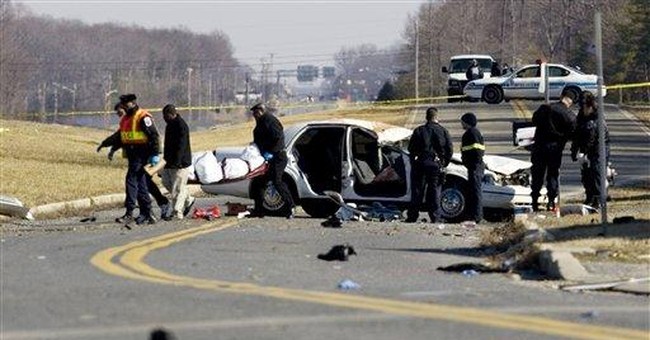 If we look to benefits only, we'll do darn near anything because there's always a benefit. The National Highway Traffic Safety Administration reported that there were 43,443 highway fatalities in 2005. If we had a maximum speed law of 15 mph, the death toll wouldn't be nearly as high, probably not even as high as 500. You say, "Williams, that's a crazy idea!" You're right, but let's not call it crazy; it's more accurate to say: saving some 43,000 lives aren't worth the cost and inconvenience of a 15 mph speed limit.

Let's apply cost versus benefits to anti-terrorism expenditures. Wyoming has two major cities: Cheyenne, its capital, with 53,000 population; and Casper, with 50,000. Federal and state homeland security anti-terrorism expenditures in 2007 totaled $6,673,910. What is the risk of Wyoming being a terrorist target and, if so, what is the expected cost in terms of human lives and property?

There's no precise way to determine Wyoming's risk of a terrorist attack and its cost, but simple reasoning suggests that too little or too much can be spent. The effect of spending too little might result in a devastating terrorist attack that could have been prevented. The effect of spending too much is less obvious because the victims are invisible. For example, purchase prices for new dump trucks for snow and ice removal range between $140,000 and $160,000. How many Wyoming lives could have been saved had some of the anti-terrorism expenditures been spent on additional dump trucks to clear streets and roads of snow and ice? There are many other lifesaving expenditures but the point is that a dollar spent for anti-terrorism is a dollar that can't be spent elsewhere where it might possibly save more lives.

The 1984 National Organ Transplant Act, which prohibits payments to organ donors or their families, creates benefits in the form of feel-good ethical values at a huge cost of lives. That's because organs must be supplied to recipients at zero price. Huge shortages are the result, as it would be if cars, homes, food, dental services and clothing had to be supplied at zero price. That's precisely the finding by Professors Randolph Beard, John Jackson and David Kaserman in their article "The Failure of U.S. Organ Procurement Policy," published in the Winter 2008 edition of the Washington, D.C.-based Cato Institute Regulation magazine.

There are a couple of factors, in addition to feel-good ethical values, that might explain the success of the ban on organ sales. People awaiting organs are disproportionately poor, minority, disorganized, sick and unaware of the cause of their plight. The people who benefit from their plight earn a lot of money and are highly organized. These are owners of dialysis clinics, those who receive funding for transplant research and agencies that manage organ procurement and allocation. In fact, everyone involved in the transplant business gets paid handsomely, except the organ donor. I'd like to know what standard of ethics justifies such a death toll and disconnect between costs and benefits.