Vijay Jayaraj
|
Posted: Dec 12, 2020 12:01 AM
Share   Tweet
The opinions expressed by columnists are their own and do not necessarily represent the views of Townhall.com. 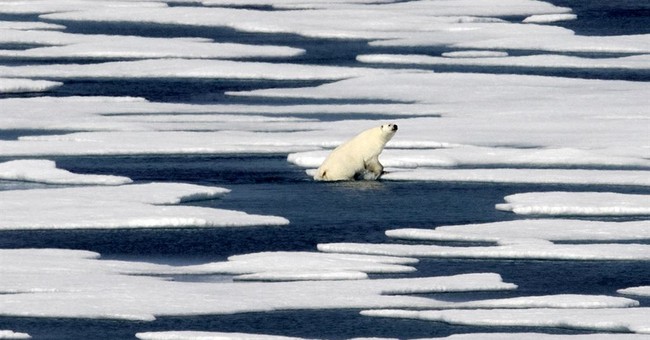 Editor's note: this column was coauthored by Calvin Beisner.

Last year, the world applauded Greta Thunberg’s emotional “How Dare You!” speech at the UN summit in New York. The teenager famously said, “Entire ecosystems are collapsing. We are in the beginning of a mass extinction.”

The mainstream media’s narrative is similar. Ecosystems are dying. Animals are going extinct. Our evil desire to consume fossil fuels is to blame!

What do you think? Are species going extinct because of manmade global warming? Christians, who honor God as Creator, should care about these matters. But caring by itself isn’t enough. We also need truth, for there is a way that seems right, though its end brings death (Proverbs 14:12).

To the dismay of climate doomsayers, tiger populations are on the rise!

Tigers are a keystone species. The integrity of their ecosystems is crucial to their welfare. Thriving tiger populations are evidence of healthy ecosystems.

So, what do you suppose is up with tigers?

India’s tiger numbers have doubled since 2006. That’s despite the country’s ever-expanding cities, industries, and mines. India counted 2967 tigers in its latest census. That is more than double the number in 2006.

Two-thirds of these tigers live in forest zones categorized as tiger reserves. The remaining third is a testament to the safe habitations outside highly protected zones.

Recent surveys affirm the healthy state of Indian forests on which tigers depend. Total forest and tree cover in India increased by 5,188 square km from 2017 to 2019. I witnessed the health of these ecosystems as a field ecologist in the buffer zones of a tiger reserve in the heart of India.

The primary concern of tiger conservationists in India is unlawful encroachment, not climate change. Climate change in the past decade has impacted tiger populations positively.

Tropical forest ecosystems in India are not dying. They remain healthy and are expanding. Tiger numbers benefit.

Polar bears are the mainstream media’s climate doomsday mascot. They used a widely projected image of a starving polar bear to generate sympathy in 2019.

The image first appeared in a video viewed by an estimated 2.5 billion people. It got the most views of any video ever on the National Geographic website.

Scientists accused National Geographic of “being loose with the facts.” Videographer Cristina Mittermeier admitted that there was no evidence that the bear’s condition was due to climate change.

“Perhaps we made a mistake in not telling the full story,” she said, “—that we were looking for a picture that foretold the future and that we didn’t know what had happened to this particular polar bear.”

People get sick, grow weak, and die. So do polar bears.

Still, climate alarmists use polar bears to win public empathy. But if you think polar bear populations are declining, you’ve been misled.

You might think environmentalists would cheer. Think again. They and the mainstream media have remained largely silent.

The polar bear problem in the Nunavut province of Canada is a testament to their growing population. Recently the Nunavut people pressured the Canadian government to allow increased culling. Why? Because their growing numbers threatened Nunavut communities.

The people of Nunavut are not seeing starving, desperate bears—quite the opposite. Yet polar bear specialists are saying these bears are causing problems because they don’t have enough sea ice to feed properly. The facts on the ground make their claims look silly, including the abundance of fat bears. Residents are pushing their government for a management policy that makes protection of human life the priority.

It’s a Myth—Don’t Fall for It

It is easy for celebrity climate activists to make sensational claims about species extinction and ecosystem collapse. The mainstream media project their speeches as authoritative. Instead, they are merely activist scare stories.