Vijay Jayaraj
|
Posted: Jun 25, 2020 12:01 AM
Share   Tweet
The opinions expressed by columnists are their own and do not necessarily represent the views of Townhall.com. 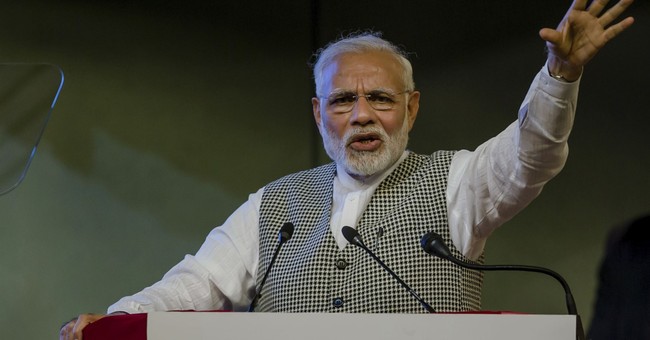 While the pandemic and political unrest have taken center stage in the U.S. and Europe, some major policy developments in Eastern part of the world have gone unnoticed.

Among those is the big fossil fuel push by India and China. India, in particular, has gone public with its intentions to open new coal mines and increase coal production. It has even celebrated the decisions publicly.

These are huge developments that are likely to have a lasting impact on the global energy scene and the politics surrounding the controversial and restrictive Paris climate agreement.

They most probably will also impact future discussion of energy policies in the U.S, as India is one of its key energy partners and importers of U.S. oil and gas.

India’s energy demands have been rising by 5 percent every year. Around 50 percent of the total demand is met by the coal sector. The country has set a production target of 1 billion tons for 2023–24.

India has coal reserves sufficient for the next 100 years. Coal is also set to become the largest source of the country’s energy generation by 2040.

As a step towards achieving these ambitious production targets, India set in motion the auction of 41 coal mines for commercial mining. Coal mining stations that were under complete government control became privatized.

The auction process was facilitated by FICCI, an industry body that acts as the intermediary between the government and the industrial sector.

FICCI’s president stressed the auctions “will help meet the country’s energy needs, reduce dependence on imports, modernize the sector and generate jobs.” She added that, “This landmark reform will unlock the country’s natural resources, stimulate the economy and catalyze India’s path to a 5-trillion dollar economy.”

Prime Minister Narendra Modi, launching the auction, minced no words when it came to the intentions behind privatization. In a televised address, Modi said, “Today’s auction is a win-win for all stakeholders. Industries will get new markets. State governments will get better revenues. Employment opportunities will be created for many, most notably youngsters.”

He further said, “The auction of coal blocks for commercial mining is a historic step. In a way, it marks the start of the much needed process to free the entire coal sector from decades of lockdown. India has taken a major decision to fully open the coal and mining sectors for competition, capital, participation and technology. Reforms linked with the coal sector augur well for the development of tribal belt in Eastern and Central India.”

The Secretary of Coal Ministry welcomed the decision and recognized how these auctions will help the coal sector flourish: “Commercial mining will bring coal mines and coal trade within the reach of any enthusiastic entrepreneur.”

But he also indicated that even such high production of coal cannot offer immunity from energy shortage. The country will have to continue to rely on imports of coal, oil, and natural gas.

This is where India’s energy partners like the U.S. can benefit immensely. In the two years ending with March 2020, U.S. oil exports to India averaged 6.8 million barrels per month.

India is the fourth largest importer of U.S. crude oil and the fifth largest destination for U.S. natural gas. India predicts its energy trade with the U.S. will increase by 40% (U.S. $10 billion) in the year 2020.

It is important to remember that the U.S. has already pulled out of the energy restrictive Paris Agreement, which seeks to reduce fossil fuel extraction and use.

Though India and China are part of the agreement, they continue to expand their fossil dependency, in defiance of promises made at Paris.

With the current pro-fossil stance, it is likely that India will continue to grow as America’s preferred importer of oil and gas in the coming years.

VijayJayaraj (M.Sc., Environmental Science, University of East Anglia, England), is a Research Contributor for the Cornwall Alliance for the Stewardship of Creation.