Vijay Jayaraj
|
Posted: Jul 06, 2019 12:01 AM
Share   Tweet
The opinions expressed by columnists are their own and do not necessarily represent the views of Townhall.com. 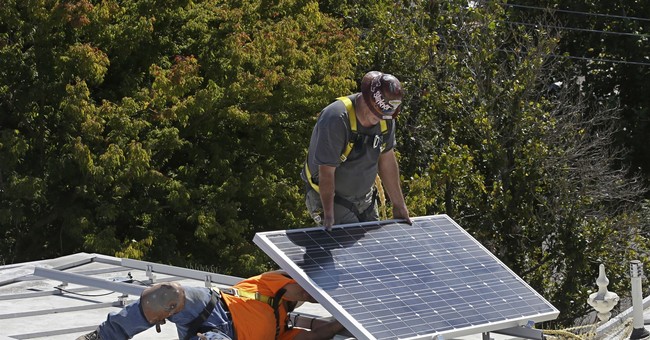 A transition to renewable energy sources is a likely scenario if the anti-fossil establishment manages to persuade lawmakers to implement their green energy policies.

Given the high probability, and the transitions already happening in some countries, it is high-time for us to inspect the functional and operational efficiency of renewable sources, especially the highly acclaimed solar installations.

The so called “craze” about renewable energy is a myth. The top users of fossil fuels are still actively generating power from fossil fuel and are also helping other countries to develop fossil fuel technology.

The major reasons for this are the high cost associated with installation and generating power, and the unreliable nature of the power generated.

The sun sends out abundant energy, yet solar energy can be generated only during the daytime, and any high-power consuming system must rely on other sources for energy during the night. The current industry-standard storage technologies are not sufficient to provide backup during the non-generational hours.

Even during the daytime, solar energy cannot meet the demands of densely populated cities. Even worse, they consume a lot of space while generating proportionately less energy than fossil fuels or nuclear.

When it comes to real estate, solar energy is the worst. Nuclear and fossil fuel plants generate the same energy by consuming only a fraction of space that solar consumes.

Despite these practically undesirable aspects, many countries have gone forward and implemented solar at a large scale. Here’s a look at some of these instances where a transition to renewables had resulted in a net irreversible loss.
Solar Failure in Australia and India
Australia saw a spike in domestic solar installations during the past five years. Around 20 percent of Australian homes have installed rooftop solar. But, it came with baggage.

There have been increasing reports of solar installation failures and even proven cases of fire hazard to the homes. Nearly 17 percent of rooftop solar systems were declared “substandard,” and around 3 percent of all installations were deemed unsafe.

Melbourne Fire Brigade has acknowledged that there have been at least 25 fires in the Melbourne metropolitan area in the past five years started by problems with rooftop solar.

A laboratory in Canberra that conducts commercial testing for solar panels said that even some of the trusted brands produced panels that were defective and that it is practically impossible to spot the faulty panels when purchasing.
Observers of the renewable energy market in Australia attribute the failures to the import of poor-quality solar products and the lack of laws requiring strict quality standards.

In Asia, India seems to suffer from similar problems with substandard solar panels. At international climate conferences, India—one of the largest emitters of carbon dioxide—has been vocal and proud about its ambitious 100-gigawatt solar capacity target for 2022.

Yet, on the ground, solar’s future is not so encouraging. Raj Prabhu from Mercom Capital Group—an observer of the Indian energy market—said, “Poor quality installations if not brought under control will affect all installers in the country as word spreads among consumers about unviable projects and poor-quality installs that may not last long. … the current scenario in the residential rooftop segment is untenable.”

Clearly, solar transitions are not panning out as planned. The drawbacks and problems mentioned here are just about the issues related to installation and safety. The inefficiency of solar panels to produce reliable electricity is one of the biggest drawbacks.

The other rarely addressed drawback is the environmental hazard associated with the disposal of used solar panels, which is proving to be more and more difficult and harmful to the environment because of the large amounts of toxic, rare-earth metals in them.

A transition to solar is a recipe for disaster. Wise individual house owners will stay away from solar installations, given the overwhelming evidence of their inefficiency, excessive cost, hazardous nature, and spurious sales of substandard materials.