With A Pinch Of Salt: Endless Failure Of Climate Doomsday Tales

Vijay Jayaraj
|
Posted: Jun 23, 2019 12:01 AM
Share   Tweet
The opinions expressed by columnists are their own and do not necessarily represent the views of Townhall.com. 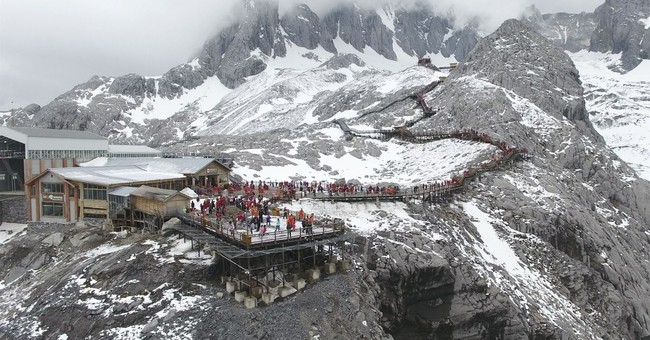 On June 29, 2017, the Dailymail in UK ran an article headlined “Four years to save the Earth: 2020 is the deadline to avert climate catastrophe, experts claim in chilling commentary.”

Two years later and halfway to deadline, the earth has not changed much. If anything, the El Niño of the 2016-17 season gave way for much cooler temperatures across the globe and the past two years have been colder than 2016.

This is just one of the many climate doomsday news articles that gets published in our mainstream news media every single day.

How seriously should we treat the climate doomsday claims?

In mid-2000s “Arctic sea ice melting” became the buzz word and the star of the climate apocalypse movement. Since then, the melting of Arctic sea ice became the central theme of climate doomsday theories.

In 2007, news media across the globe warned that the Arctic would soon be ice-free because of the excessive melting from global warming. It came on the heels of Al Gore’sAn Inconvenient Truth, a 2016 documentary on how global warming is melting Arctic ice and killing Polar bears.

“Arctic summers ice-free 'by 2013,” was a BBC headline. The article justified its claim by referring to the modelling forecasts of climate scientists. It read, “using supercomputers to crunch through possible future outcomes has become a standard part of climate science in recent years … modelling studies indicate northern polar waters could be ice-free in summers within just 5-6 years.”

This was not the only case where the computer models failed in their predictions.

During the past 19 years, the computer climate models used to forecast global temperatures failed to predict the temperature levels accurately. Even worse, the models failed to capture the apparent slowdown in the warming of earth.

These are the very same models that are currently being used to justify climate policies like the Paris agreement. With a two-decade record of dismal failure in predicting temperatures, the model outputs can hardly be trusted as valid indicators of future climate.

In the U.S., tornado activity was at its record low in 2018 and the severity of wildfire has actually declined. Studies also indicate that the global area burned by wildfire has declined during the past few decades.

And these are just the incompetency of doomsayer’s claims with the current state of climate. If we contextualize the present-day climate in comparison to the climate during the past 10,000 years, then most of the doomsday theories lose their sting.

Arctic sea ice, for example, is at one of its highest levels in the Holocene (last 10,000 years). The temperature levels have constantly swung in the past, including the well-studied two warm periods (Roman and Medieval) and one cold period (Little Ice Age) in the past 2000 years.

More surprisingly, throughout the history, the atmospheric carbon dioxide (CO2) concentration levels followed the temperature levels and not vice versa. In other words, atmospheric CO2 concentration were not the primary drivers of the rise in temperatures (whenever they occurred).

This was reflected in the temperature measurements between 2000 and 2018, when the exponential increase in atmospheric CO2 concentration failed to cause a rise in global temperature levels.

It is a gentle reminder that we should take the doomsday claims with a pinch of salt. Neither are they scientifically accurate nor are they put through rigorous scrutiny before being disseminated to the masses.