Victor Davis Hanson
|
Posted: Mar 15, 2018 12:01 AM
Share   Tweet
The opinions expressed by columnists are their own and do not necessarily represent the views of Townhall.com. 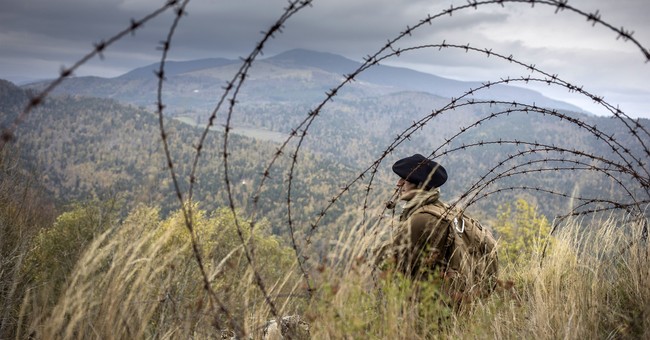 One hundred years ago this month, all hell broke loose in France. On March 21, 1918, the German army on the Western Front unleashed a series of massive attacks on the exhausted British and French armies.

German General Erich Ludendorff thought he could win World War I with one final blow. He planned to punch holes between the French and British armies. Then he would drive through their trenches to the English Channel, isolating and destroying the British army.

The Germans thought they had no choice but to gamble.

The British naval blockade of Germany after three years had reduced Germany to near famine. More than 200,000 American reinforcement troops were arriving each month in France. (Nearly 2 million would land altogether.) American farms and factories were sending over huge shipments of food and munitions to the Allies.

Yet for a brief moment, the war had suddenly swung in Germany's favor by March 1918. The German army had just knocked Russia and its new Bolshevik government out of the war. The victory on the Eastern Front freed up nearly 1 million German and Austrian soldiers, who were transferred west.

Germany had refined new rolling artillery barrages. Its dreaded "Stormtroopers" had mastered dispersed advances. The result was a brief window of advantage before the American juggernaut changed the war's arithmetic.

The Spring Offensive almost worked. Within days, the British army had suffered some 50,000 casualties. Altogether, about a half-million French, British and American troops were killed or wounded during the entire offensive.

But within a month, the Germans were sputtering. They could get neither supplies nor reinforcements to the English Channel. Germany had greedily left 1 million soldiers behind in the east to occupy and annex huge sections of conquered Eastern Europe and western Russia.

The British and French had learned new ways of strategic retreat. By summer of 1918, the Germans were exhausted. In August, the Allies began their own (even bigger) offensive and finally crushed the retreating Germans, ending the war in November 1918.

What were the lessons of the failed German offensive?

The fortunes of war can change in days. In late March 1918, the Germans thought the war was won. Three months later, they knew it was lost. Often, the worst moments of war come right before the end, as the last-gasp battles of Waterloo, the Bulge and Okinawa remind us.

In 2016, an ascendant Islamic State bragged that it had formed a vast new Islamic caliphate. By the end of 2017, ISIS had been bombed to smithereens and routed.

Long-term strategy matters. Without a strategic vision, short-term tactical success means nothing. The advancing Germans had no real idea of what to do next -- even if they reached the English Channel. There was never any chance that the British would quit. The British had survived worse at the earlier battles of the Somme and Passchendaele.

In our time, America has never quite determined its strategic aims in the nearly 17-year-old Afghan war. Is it to crush the Taliban? To build a democracy in Afghanistan? To rid the country of terrorist havens? To stop the opium trade? To make Afghanistan economically and militarily self-sufficient? To simply not lose? All that and more have been mentioned as American goals.

Alliances are critical. What did it matter that Germany had finally defeated Russia if at nearly the same time it had provoked an even stronger new enemy in America? The key to denuclearizing North Korea is creating a frontline partnership of Japan, South Korea, Taiwan and the U.S. -- and to flip either China or Russia to our side to ensure that sanctions strangle Pyongyang.

War is decided as much by economics as by soldiers. Germany unleashed a lethal army against the Allies, but its soldiers did not even have enough food or munitions to sustain the offensive after a few weeks. Germany had neither the food nor the factory capacity to conduct war against the combined might of Britain, France and the United States. In many ways, 1918 Germany was like today's Russia -- formidable on the battlefield, but only for a short duration and without the economic ability to finish what it starts.

Leaders usually ignore history. A little more than 20 years after the Spring Offensive, Hitler's Third Reich fought America, Britain, France and Russia; unleashed its armies in a two-front war in Europe; was blockaded; and lost another world war.

The final battles of World War I will have their 100 anniversaries this year. But the lessons of how Germany almost won and then suddenly lost are ageless.