Victor Davis Hanson
|
Posted: Jul 27, 2017 12:00 AM
Share   Tweet
The opinions expressed by columnists are their own and do not necessarily represent the views of Townhall.com. 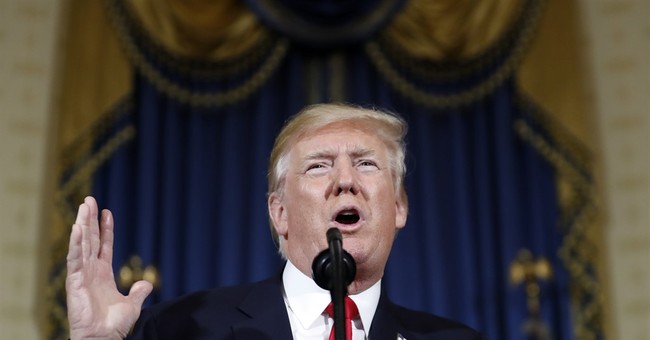 The American political system has never quite seen anything like the current opposition to President Trump and his unusual reaction to it.

We are no longer in the customary political landscapes. Usually, the out-of-power opposition -- in this case, the Democratic Party -- offers most of the criticism and all of the alternative policies in order to win in the next election. Instead, Trump has an entire circle of diverse critics shooting at him. But they just as often end up hitting each other -- and themselves.

So far, Trump's most furious Democratic opponents have not been able to offer alternative visions to Trump's agenda that might help them win back Congress in the 2018 midterm elections. Higher taxes, more government regulations, less gas and oil production, loose immigration policies and the promotion of identity politics are not really winning issues.

Instead, the aim is either to remove Trump before his first term is up or to so delegitimize him that he is rendered powerless.

Yet obsessions with Trump often lead to boomerang excesses -- mad talk and visuals, from obscene rants to decapitation art -- that hurt the attackers more than Trump.

Republicans should have been delighted with control of both houses of Congress, the Supreme Court, state governorships and the legislatures, and the White House. In principle, they laud Trump's efforts to appoint strict constructionists to the federal courts, to increase oil and gas production, to reform Obamacare and the tax code, and to restore deterrence abroad.

Yet the Republican-controlled Congress is nearly paralyzed. It simply cannot unite to deliver on promised major legislation.

Some senators and representatives find Trump too uncouth to support his otherwise agreeable proposals, and they fear (or hope) that he may not finish out his term. Some worry that Trump's low approval rating might hurt their own re-elections. Some are careerists who value getting along more than fighting for the White House agenda.

The result is that when factions of the Republican Congress are not battling each other, they are feuding with Democrats and often with the Trump White House.

One reason Trump has been slow to make major appointments is that he cannot trust the establishment of his own party, many of whom in 2016 signed petitions declaring Trump unfit for office.

At best, some anti-Trump intellectuals and pundits still cannot separate Trump's conservative agenda (which they privately support) from Trump's reality television persona (which they find boorish and beneath the dignity of the presidency). At worst, some are so invested in the idea that Trump would or should fail that their opposition threatens to become an obsessive self-fulfilling prophecy.

The anti-Trump conservative intellectual establishment also does not quite know where to aim its fire. At Democrats whose agendas they used to oppose? At Congress for supporting or not supporting Trump? At the liberal media that courts anti-Trumpers because it finds their Trump hatred useful for the time being?

The media have given up on impartial news coverage. Some journalists have announced that Trump is so beyond the pale that he deserves only unapologetic critical treatment. Research has shown that network coverage has been overwhelmingly anti-Trump.

At the center of this directed fire is the flamboyant, sometimes polarizing but usually cunning Trump. He is not a stationary target, but instead constantly ducking and weaving with a flurry of executive orders, major White House shakeups and trips throughout Europe and the Middle East, where he often gives good speeches and sometimes is warmly greeted.

The result of the circular firing squad is a crazed shootout where everyone gets hit.

Democrats as of yet have no obvious presidential candidates or even credible spokespeople to make the case against Trump. It is one thing to boast about the supposed buffoonery of Trump but quite another to offer a candidate and an agenda that would rebuild the so-called blue wall of swing states and reverse the results of 2016.

The media is increasingly discredited and polls more poorly than Trump.

The Republican-majority Congress is likewise even less popular than an unpopular Trump. Conservative voters may remember that Trump beat the unfavorable odds to deliver the White House to Republicans, while those in Congress blew favorable odds by not passing legislation when they enjoyed clear majorities in the House and Senate.

So the circular shooting goes on until someone is left standing -- or all are too wounded to continue.

Forgotten in the hail of 360-degree suicide gunfire is the only story that counts: the welfare of the United States.

If Trump grows the economy, creates more jobs and national wealth, achieves energy independence and restores deterrence abroad, all the wild firing will cease. If not, he and his attackers will finish each other off.