Victor Davis Hanson
|
Posted: Mar 31, 2016 12:01 AM
Share   Tweet
The opinions expressed by columnists are their own and do not necessarily represent the views of Townhall.com. 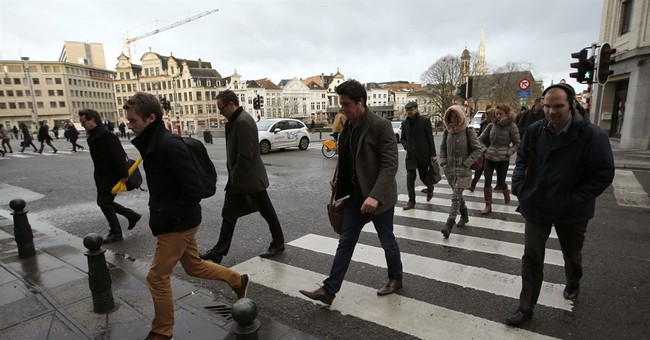 China has a long record of persecuting its Muslim minorities. Russia has brutally suppressed the separatist movement of the predominantly Muslim Chechens with bombing and shelling. Russian President Vladimir Putin ordered airstrikes against Syrian Muslims without much worry over collateral damage. India has zero tolerance for Islamic radicalism and hits back hard any time Muslim terrorists attack.

Given such severe backlash elsewhere, why do radical Islamists prefer to strike Europeans and Americans -- from Paris and Brussels to Boston and San Bernardino?

No place has been more open to Muslim refugees than the United States and the European Union. Together they have accepted several million emigrants from the Middle East since the September 11, 2001, terrorist attacks on New York and Washington.

The EU and the U.S. lavish foreign aid money on the Palestinians. America has offered a half-century of support to Jordan and Egypt. It is much easier to be a Muslim in Europe than a Christian in the Middle East.

Barack Obama started his presidency eager to win over the Muslim world. In a 2009 interview with Dubai-based TV news channel Al Arabiya, he emphasized that he has Muslim family members. Obama's NASA director redefined the space agency's "foremost" mission as Muslim outreach.

Obama has sought a closer relationship with Turkish President Recep Tayyip Erdogan despite Erdogan's Islamization of Turkey's shaky democracy. In contrast, Obama alienated Prime Minister Benjamin Netanyahu of Israel, the most steadfast friend America has in the Middle East.

Obama has publicly deferred to Muslim interests while abroad. He apologized to the Turkish parliament for a host of supposed past American sins -- "some of our own darker periods in our history." In symbolic fashion, Obama bowed to King Abdullah of Saudi Arabia. The president's Cairo speech mythologized Islamic contributions throughout history and downplayed Western achievement.

The Obama administration has in effect banned the use of the terms "jihadism" and "Islamic terrorism." It prefers a host of euphemisms for Islamic terrorist acts, from "workplace violence" to "man-caused disasters." CIA Director John Brennan redefined jihad as a "holy struggle" of Islamic self-purification rather than a Koran-sanctioned campaign against infidels.

Despite all of that extraordinary presidential outreach, the West remains under constant terrorist threats and episodic attacks, often from Muslim youths who were offered sanctuary in places such as Belgium, France, Massachusetts and California.

There are a number of reasons why jihadists prefer to target Westerners.

The West is wealthy, sensual and liberal, and it offers the chance of global publicity to killers.

Muslim immigrants from the Middle East prefer the higher standard of living in Paris than the abject poverty at home. But they also hate how such affluence insidiously tempts their own religious fundamentalism. They do not praise Europe for its generosity, but rather blame it for its decadence.

The West is obsessed with mandated equality. The Muslim immigrant -- who often arrives without education, language facility or money -- easily learns how to blame his relative poverty on his hosts. He is rarely reminded that not being relatively well off in Frankfurt or Boston is still far better than being unsafe and poor in Yemen or Chechnya.

America asks little of its immigrants. U.S. policies allow illegal entry en masse. America does not insist that newcomers learn English, and it largely prefers the trendy multicultural salad bowl to the time-tested assimilationist melting pot. As a result, there are entire communities where recent immigrants and their families prefer to guilt-trip, rather than show affinity toward, their adopted countries.

The West is also lax. A jihadist knows that he has a good chance of re-entering the U.S. or Europe from the Middle East without detection. If he's caught, the penalties are far less severe than they would be if he tried to start a terrorist cell in China or Russia. Extenuating claims of multicultural victimhood would not work in either autocracy.

Many Westerners are more scared of being labeled as illiberal or nativist than they are of being unsafe.

Islamic terrorists sense that Westerners are increasingly materialist rather than spiritual. Europeans in particular are becoming more secular. Their birthrates are declining. And they seem to believe more in satisfying their appetites than in finding transcendence through children and religion.

As a result, jihadists trust that they can cull a handful of Westerners every few weeks from an otherwise indifferent herd. Their only challenge is to keep the harvest of Westerners down to a few dozen and not to get greedy in their bloodlust.

Terrorists seem to believe that as long as they avoid another 9/11-like massacre, they can continue to take lives and insidiously weaken the West without awakening it from its morally indifferent slumber.

And they may be right.