Victor Davis Hanson
|
Posted: Mar 17, 2016 12:01 AM
Share   Tweet
The opinions expressed by columnists are their own and do not necessarily represent the views of Townhall.com. 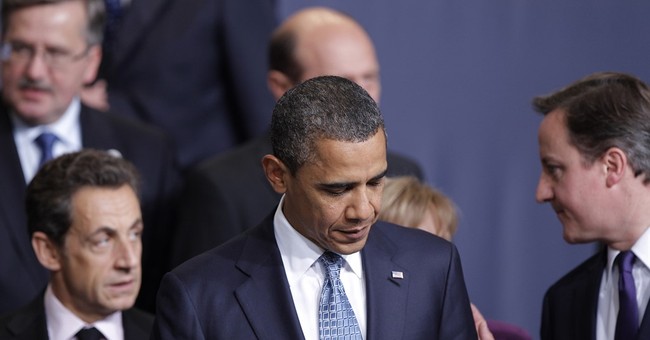 Trending
In a cover story in the latest issue of The Atlantic magazine, President Obama offers astonishing scapegoating for his own foreign policy disasters.

According to Obama, the deterioration of the ISIS wasteland that is now Libya was not due to improvident administration bombing followed by a hasty departure, but was largely the fault of others.

European allies, the president complained, did not do any follow-up nation-building despite the proximity of Libya. Obama depicts French President Nicolas Sarkozy as a showboater who tried to claim credit for the air campaign in Libya after the U.S. had done the heavy lifting.

Obama did not stop there.

Administration aides told The Atlantic that Obama's unfortunate quip about ISIS being a "jayvee" organization was really the Pentagon's fault. Gen. Lloyd Austin, who at the time was leading U.S. Central Command, supposedly misled Obama by describing ISIS as a "flash in the pan.”

Earlier, Obama had blamed the spread of ISIS on National Intelligence Director James Clapper, (who, Obama told "60 Minutes," "has acknowledged that, I think, they underestimated what had been taking place in Syria."

Obama also criticized British Prime Minister David Cameron for not getting Parliament on board for decisive action in Syria.

This blame-gaming is old and tired. After Obama established a "red line" with Syrian President Bashar Assad on the use of chemical weapons, only to see Assad ignore the warning with impunity, Obama denied that he had ever set a red line in the first place. Instead, he claimed the United Nations and Congress had set one. Obama has blamed the Syrian fiasco on Congress and Secretary of State Hillary Clinton for pressing for the training of Syrian rebels.

Not long ago, the Obama administration boasted of its swap of Taliban terrorists who'd been imprisoned at Guantanamo Bay for U.S. Army deserter Bowe Bergdahl. But when the public became outraged, administration handlers began blaming then-Defense Secretary Chuck Hagel for the deal.

When Obama has not been busy blaming former President George W. Bush for various problems, Obama and his handlers have attributed the anemic economy to "fat cat bankers," the "one percent" and "corporate jet owners."

The new national divisiveness is, according to Obama, not due to his own past "get in their face" and "punish our enemies" rhetoric, but rather due to a combination of Republican partisans, electoral gerrymandering, the media and super PACs.

"Earthquakes, tsunamis, revolutions in the Middle East, European financial crises, and now we even have earthquakes outside of Washington, D.C."

When Obama entered office with Democratic majorities in both houses of Congress, he nevertheless blamed almost everyone but himself for not getting his initiatives passed. From 2009 to 2011, he variously faulted Republicans, Ronald Reagan, Wall Street, George W. Bush, Fox News and Congress for gargantuan deficits largely of his own making and for his inability to pass immigration reform and a cap-and-trade system.

The Solyndra debacle, Obama claimed, was the fault of the Chinese, as well as both Democrats and Republicans in Congress. The culprits for the BP oil spill were corrupt old-guard government regulators, not the federal agency that was in charge of overseeing offshore drilling.

Obama has even blamed the American people for their own economic problems. "The way I think about it is, this is a great, great country that had gotten a little soft, and we didn't have that same competitive edge that we needed over the last couple of decades," he said in a 2011 interview.

The flip side is that Obama rarely shares credit for unexpectedly positive developments that he had little or nothing to do with. His administration did its utmost to stop new oil and gas leases on federal lands. But when the fracking revolution nonetheless went on to make American nearly energy-independent and sent gas prices tumbling, Obama took credit for the windfall.

When Obama ran for office, he routinely blamed the Bush administration for the Iraq War. After the surge (which he opposed) worked, Obama entered office to a quiet Iraq -- and immediately took credit for the post-surge calm. Vice President Joe Biden called a constitutional Iraq "one of the great achievements of this administration." Obama himself added that Iraq was "sovereign, stable and self-reliant."

Yet when Obama pulled all U.S. peacekeepers out of Iraq before his 2012 re-election bid and the country blew up, he went back to blaming Iraq violence on Bush.

Taking responsibility for mistakes is a sure sign of character; blaming others is not.

After nearly eight years of buck-passing, Obama is starting to sound a lot like his Republican alter ego, Donald Trump, whose failed business ventures and embarrassing rhetoric are likewise always the fault of somebody or something else.