The Sleeping Dogs of Europe 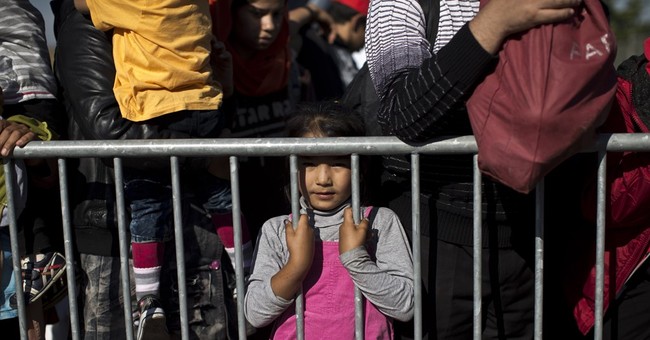 The bailed-out Greeks are still broke. Now their islands are flooded with a horde of migrants from the Middle East and Africa.

Spain, Portugal and Italy are almost in the same boat. Their shared Mediterranean traditions -- and vulnerabilities -- are far different from those of northern Europe's more affluent nations.

Given the triad of history, geography and culture, it is no accident that Europe on the Mediterranean is being hit first by Third World immigration heading northward. Southern Europe always seems to owe money to the north.

Eastern Europeans are angry that the EU tries to override their own individual immigration laws. Nearly a million immigrants, most of them young male Muslims, now flock to the borders of Eastern European countries. From the Baltic states to the former Yugoslavia, these nations for 500 years were caught in the meat grinder when East fought West in Eastern Europe, the battered sea wall against which the tsunami of the Islamic Ottoman Empire finally crashed and receded.

The British always counted on the English Channel to separate them from the passions of their mainland European cousins -- namely France and Germany. Now, migrants hop bullet trains under the channel to reach the promised land of British entitlements -- as the United Kingdom tries to back away from the European Union.

As a result of the continent-wide chaos, millions of Europeans are now furious with the European Union. Its inflexible euro and vast bureaucracy seem not just to override but often destroy local customs and traditions.

In truth, the EU exists in name only. In reality, it is largely run by the German government and its bankers, who decide how a debtor like Greece will or will not stay in the EU, or how many migrants Europe collectively should let in.

Because of Germany's unique 144-year history -- having been at the heart of three wars in Europe -- its neighbors have been happy to prosper in its reflected glory of pacifism and prosperity. Germany's population and economy remain by far the largest in Europe.

It is not the bureaucracy of the European Union that has kept the peace since World War II -- the longest war-free period in Europe since the fall of Napoleon. The EU did not exist until 1993, nearly a half-century after the end of World War II. The euro monetary union is not even two decades old.

What, then, has kept Europe quiet?

The answers are three artifacts of World War II that are rarely mentioned, but should be. None have anything to do with the EU.

One reason is American-led NATO. The treaty organization channeled national militaries into a central armed force led by an American policeman that never quite left its beat after the end of World War II.

As originally envisioned, the alliance really did keep the Soviet Union out of Europe, America in it -- and the Germans down. Should NATO disband, European nations will be free to arm and sign treaties with any power they choose. We know how that worked out between 1870 and 1945.

The second keeper of peace is the peculiar role of nuclear weapons on the European continent. Only the United Kingdom and France have nuclear missiles. But the strongest and largest nation, Germany, does not -- for a variety of reasons dealing with the postwar rehabilitation of the defeated and discredited Nazi state.

Should Britain and France ever give up their nuclear weapons, as the new head of British Labor Party has advocated, or should Germany (or others) go nuclear, then watch tensions and conflicts rise in a manner unseen since the end of World War II.

Third is the war guilt of Germany, a still-powerful force 70 years after the defeat of Hitler.

The destruction of Europe, the Holocaust, and the 60 million dead that followed from Germany's invasion of Poland in 1939 are the ghosts that still haunt Germans, most of whom were not yet born when the war ended.

Guilt accounts for why Germany lends money that it knows will not be paid back. A desire for atonement (along with labor shortages) explains why it welcomes in thousands of young male Islamic migrants with minimal background checks and with no real idea how to integrate them rapidly into German society.

Amid rising ethnic tensions, hordes of migrants and massive debt, Europeans can keep or junk the mess of the European Union and the inflexible euro as they please, without much worry that they will revert back to their bloody past.

But they should leave the sleeping dogs of Europe alone. They need NATO. They must not tamper with the present nuclear club of Europe. And they should tread lightly around the Germans' strange and sometimes unpredictable expressions of penance.

Otherwise, what follows could be frightening.