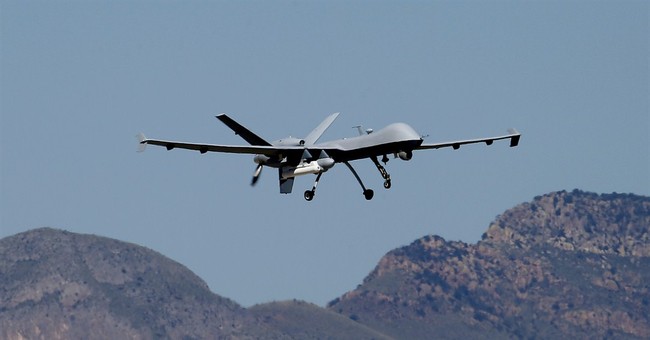 There are lots of hypocrisies surrounding the recently released executive summary of the Senate Intelligence Committee report on the CIA's detention and interrogation program. But they pale in comparison to the current Democratic silence about President Barack Obama's policy of targeted drone assassinations.

Since 2004, drones have killed an estimated 2,400 to 3,888 individuals in Pakistan alone, according to the Bureau of Investigative Journalism in London. An estimated 345 to 553 individuals in Yemen have been killed in drone strikes over the same period. The BIJ reports that the Obama administration has "markedly stepped up the use of drones. Since Obama's inauguration in 2009, the CIA has launched 330 strikes on Pakistan -- his predecessor, President George Bush, conducted 51 strikes in four years."

On some occasions, drones blew up women and children in the target area. According to the BIJ, casualties of the drone strikes include 480 to 1,042 civilians in Pakistan and Yemen.

How is assassinating a suspected terrorist -- and anyone unfortunate enough to be in his general vicinity -- with a drone missile morally or legally different from waterboarding a confessed terrorist at Guantanamo Bay? At least the waterboarded suspect survives the ordeal.

The Senate Intelligence Committee report failed to disprove the CIA's contention that only three detainees were waterboarded. A small number of detainees were subject to sleep disturbance or excessive temperatures. In contrast, drone strikes ordered by Obama may have assassinated thousands.

Were those who were waterboarded more or less likely to be plotting terror than those blown to smithereens? We do not know that answer. Yet the former were in detention -- one of whom confessed to plotting the 9/11 attacks, and another suspected of masterminding the USS Cole attack -- while the latter were never caught, much less questioned, and their status as terrorists was far less assured.

Those killed by drones were not in uniform. They did not serve a nation-state and therefore were not classified as military targets in the traditional sense. Obama had assumed persuasively that they were terrorists and therefore without the protection of the Geneva Conventions that govern the rules of war.

But were the detainees at Guantanamo any different? They did not surrender on the battlefield in uniform or in the service of a nation that adheres to the Geneva Conventions. Blowing up suspects or waterboarding high-level terror suspects may or may not be moral, but the two acts seem to be analogous.

Is one act more heinous than the other? Most people would prefer to be waterboarded than vaporized. Drones blow up everybody nearby. Waterboarding does not affect other nearby prisoners who are not being interrogated.

If the wrong suspect is waterboarded, he can be exempt from further such interrogation. If the wrong target is blown up, he has no second chance.

Did saving American lives distinguish between the two practices? We do not know. But the suspects incinerated by drones never had any opportunity to be interrogated. Their knowledge of terrorist networks went up in smoke with them. However, Khalid Sheikh Mohammed, the waterboarded mastermind of 9/11, may have offered information about several supposed copy-cat operations to follow.

Not really. The charge against Bush is one of laxity. Supposedly, CIA interrogators freelanced without proper executive-branch supervision. In contrast, Obama is said to go over the drone hit list himself.

In 2010, Obama publicly joked about sending predator drones after any would-be suitors of his two daughters: "But boys, don't get any ideas. Two words for you: predator drones. You will never see it coming." He also reportedly bragged to aides of his stepped-up drone program, "Turns out I'm really good at killing people."

What, then, are the major ethical and legal distinctions between drone assassinations and enhanced interrogation techniques that might explain the radically different media and political responses?

I can think of at least three in the present political landscape.

One, Americans rarely hear much about the killing of suspects in distant countries. But they can obtain firsthand accounts of treatment of those in U.S. detention facilities. The cliché "out of sight, out of mind" explains some of the present selective outrage.

Two, Obama is a Nobel Peace Prize laureate, a one-time vocally antiwar senator and an iconic liberal hero. He is assumed not to have wanted to blow up thousands of suspects, yet it is all too easy for many to believe that Bush, the Texas conservative, must have wanted to harshly interrogate confessed terrorists.

Three, the committee members who compiled the newly released report are all Democrats. Their investigation targeted a CIA program launched by a Republican administration. In the pursuit of their seemingly predetermined findings, they relied solely on documents and chose to not interview CIA personnel.

When President Obama leaves office, what will the next Senate Intelligence Committee do? Will a Republican-controlled Congress take a harder look at the rationale, ethics and legality of the former president's drone assassinations? Will it blame Obama for vastly expanding the body count of such a lethal program?

Will it charge that in the topsy-turvy morality of the Obama presidency, his administration preferred to bypass Guantanamo by choosing to kill suspected terrorists rather than capture them?