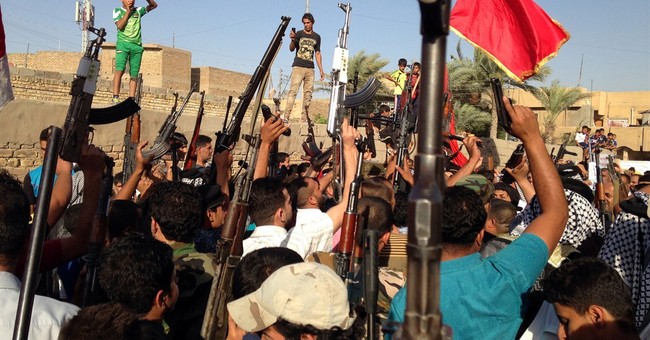 Two and a half years ago, the U.S. pulled every soldier out of a mostly quiet Iraq. In the void, formerly al-Qaeda-affiliated terrorists calling themselves "The Islamic State of Iraq and Syria" are now tearing apart the country, leaving medieval savagery in their wake.

Obama partisans are blaming the Bush administration for going into Iraq in the first place. But critics counter that Obama wanted out of Iraq before the 2012 election at all costs. The result of that reckless skedaddle is that we have thrown away the hard work of the 2007-2008 surge that finally broke the back of both al-Qaeda and Iranian-backed Shiite terrorists.

Almost everyone faults Nouri al-Maliki, the ingrate Shiite prime minister of Iraq, who has serially trashed the American benefactors who liberated his country from Saddam Hussein's genocidal regime. Maliki has sabotaged every effort to bring Shiites and Sunnis tougher. Now he is desperate for American help to save his scalp. Iran may end up intervening, as Iraq is splitting into Kurdish, Shiite and Sunni warring states.

President Obama has announced that we will pull all troops out of Afghanistan in 2016. But Afghanistan is even less stable now than Iraq was when we left. We can assume what Kabul will look like when the last American leaves.

Most believe that Libya is now worse off after the U.S. and European bombing of the Muammar Gaddafi regime that led to its removal and subsequent sectarian fighting. The U.S. was unwilling to send troops openly to restore order. The subsequent rise of al-Qaeda terrorists led to the destruction of the American consulate in Benghazi and the death of our ambassador and three other Americans.

Al-Qaeda affiliates have slowly taken over the resistance to the barbaric regime of Syrian President Bashar al-Assad. Syria is now a wasteland like Libya -- and perhaps soon most of the Middle East. Obama threatened to intervene, issued red-line threats, backed off, and then asked Russian President Vladimir Putin for face-saving help.

There is a common theme to the repeated messes in the Middle East. Invading countries such as Afghanistan and Iraq to topple genocidal anti-American tyrants doesn't result in long-term advantages unless there are years of American postwar occupation -- which is costly and deeply unpopular with voters.

Letting Middle East factions kill each other off -- and kill tens of thousands of innocents in their way -- poses a humanitarian disaster and can lead to the sort of chaotic badlands that allowed Osama bin Laden and his gangsters to plan attacks on the U.S.

Just bombing and leaving is not always that much better. A chaotic Libya is now worse than under Gaddafi.

Whichever bad choice the Obama administration prefers, it should at least level with the American people. Every postwar occupation in our history has dealt with unappreciative and unstable allies such as Maliki -- from difficult South Korean strongmen of the 1950s and 1960s to Hamid Karzai in Afghanistan. Pulling completely out of a mostly quiet Iraq just because we had to work with unsavory characters made no sense.

Airbrushing the Middle East or the war on terror also leads nowhere. The administration can create mythologies about Islamic history, as in Obama's unfortunate Cairo speech. It can bow to sheiks, commit NASA to Muslim outreach, emphasize the Muslim roots of Obama's father's family, invent euphemisms for the war against radical Islam, and dub the Muslim Brotherhood "largely secular."

The result will still be that Middle Eastern factions hate us. Polls reveal that Obama is as unpopular in the Middle East as George W. Bush was.

The Middle East is the Middle East not because America intervenes or does not intervene, or reaches out or stays out, or imports oil or cuts back its purchases.

Instead, Middle Eastern violence and instability are homegrown. They result from a complex brew of tribalism, religious fundamentalism and intolerance, sexual apartheid, anti-Semitism, authoritarianism and statism -- all made worse by huge oil revenues and its key strategic location.

Americans have a choice. They can learn to keep clear of these quagmires and accept that hundreds of thousands will frequently die in the Middle East -- and occasionally some Americans as well. Or, if we tire of watching the violence and intervene after a 9/11-like attack, we should brace for a bloody mess that will take years of unpopular occupation.

So for now we will blame each other for the ensuing savagery and vow to let the Middle East be the Middle East -- at least until the next time Islamic terrorists slaughter our diplomats, blow up an embassy, take down an airplane or topple a New York skyscraper.