Another Partisan Push for Another 'Comprehensive Reform'? 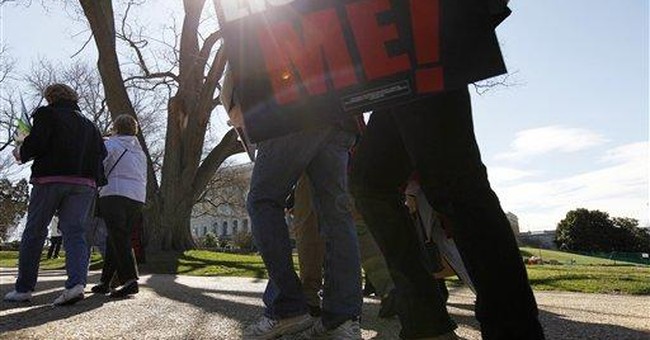 Candidate Barack Obama promised immigration activists, "I think it's time for a president who won't walk away from something as important as comprehensive reform when it becomes politically unpopular."

Now pressure groups are demanding Obama come through on his pledges.

In response, the administration may trump the health-care debate with another divisive issue -- "comprehensive reform" on immigration -- that is surely just as "politically unpopular."

After the failure of the polarizing cap-and-trade bill, and the current blood-on-the-floor fight over "comprehensive health-care reform," tackling illegal immigration right now would be a political nightmare.

Activists at next week's planned immigration "reform" rally in Washington, D.C., may use euphemisms like "comprehensive immigration reform" or stage demonstrations about "immigrant rights." But most Americans have few problems with immigration per se -- as long as it is legal and in numbers that facilitate assimilation and integration into American life.

So let us be honest for once on this issue. The problem is almost exclusively one of illegal immigration -- namely, the until-recent unlawful entry of somewhere between a half-million and 1 million new arrivals annually, mostly from Mexico and Latin America, that resulted in the current 11 to 15 million illegal aliens already living here in the shadows. Wiser counsel would insist on quietly continuing to close the border through increased security, employer sanctions, the use of tamper-proof I.D.s, and completion of the border fence. Without massive new influxes of illegal immigrants, society gains time to debate hot-button issues like guest-worker programs, amnesty and deportation. In the interim, the illegal community would become static -- and far more rapidly integrate, assimilate, intermarry or voluntarily return home. But even as the number of illegal arrivals temporarily lessens due to stricter enforcement and the recession, the impatience of uncompromising activists increases -- especially calls for amnesty as a reward for Hispanic bloc support in the 2008 election. If the administration is foolish enough to go along with their demands for such a blanket amnesty, President Obama may gain probable new registered voters, but it would be a political disaster that dwarfs the failed Bush administration attempt at addressing illegal immigration. Bush, remember, was a conservative who tried both to work with Democrats and finesse his suspicious right-wing base into supporting a Republican-sponsored plan. And he still failed when his opponents equated his earned-citizenship proposals for illegal residents as euphemisms for blanket amnesty. But as a liberal with close ties to pressure groups like the National Council of La Raza ("The Race"), Obama won't have nearly that bipartisan advantage, especially coming off a polarizing health-care debate. In addition, the economy remains stagnant. The old argument that cheap laborers from the south do the work Americans won't is now dated. Unemployed Americans might be more willing to hammer shingles, wait tables or mow lawns in the current depressed climate. And you can bet they are less willing to pay out unemployment, welfare and food and housing subsidies for those who are neither lawful residents nor always fully employed. More importantly still, violence-torn Mexico is constantly in the news. Members of drug cartels butcher each other, the innocent, the Mexican police -- and Americans. Much of the frightening violence -- far worse today than in Iraq -- is right on the border. Sometimes it spills over, convincing most Americans to keep the border more, rather than less, concrete. We should also not forget that in cash-strapped times, politicians are taking a second look at all income and expenditure. Illegal aliens are far more likely to work off the books for cash and thereby avoid normal paycheck tax deductions. Estimates put private remittances from the United States to Mexico and Latin America at anywhere from $30-50 billion a year. Much of that sum is believed to be sent by millions of illegal aliens. If low-paid residents choose to send billions southward, aren't they more likely to need government subsidies to make up the difference? If next week's protests turn out like some of the May Day rallies of the past -- when chanting demonstrators waved the flags of nations that illegal aliens do not wish to return to while criticizing the country they most certainly wanted to remain in -- it will only further turn off the general public. In a multiracial society, our system will implode if some residents can pick and choose which federal laws to follow. So the idea of yet another partisan knockdown, drag-out fight over "comprehensive reform," begs the question: Would an Obama effort to offer another polarizing fix really be about solving pressing problems -- or perhaps, once again, be more about creating bigger and permanent political constituencies?