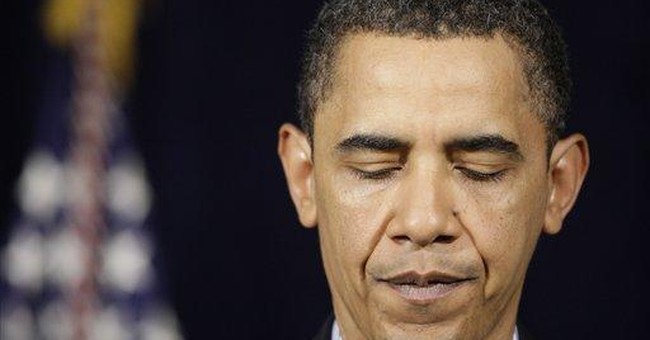 In the coming year, plenty of our chickens will be coming home to roost.

Take foreign relations. In 2009, the new administration assumed that George W. Bush was largely responsible for global tensions. As a remedy, we loudly reached out to our foes and those with whom we had uneasy relationships.

But so far these leaders -- like Iran's Mahmoud Ahmadinejad, Venezuela's Hugo Chavez and Russia's Vladimir Putin -- have only interpreted Barack Obama's serial goodwill gestures as weaknesses to be exploited. They play the part of the pushy class bully, we the whiny nerd.

In the waning days of 2009, Iran has announced it has no intention of dismantling its nuclear facilities and ignored the latest Obama deadline to cease. There's no reason not to expect the theocracy to make significant strides in its nuclear program in 2010, while continuing without rebuke to beat and murder democratic dissidents in its streets.

Russia has announced plans to develop a new generation of nuclear weapons -- and scoffed at our polite suggestions that it should pressure Iran to stop its nuclear development.

Venezuela brags of its own similar program to come -- an act that could threaten all the neighboring democracies in the region.

The administration courted China on a much-heralded Asian tour. President Obama even has said he would be our first "Pacific president."

Unfortunately, China was not impressed. It declined our advice about reducing its carbon footprint and instead reminded Americans that we owe the Chinese people nearly $1 trillion. Expect much more of that hectoring in 2010 as our debt to China grows.

Consider also the threat of Islamic terrorism. In 2009, some in the Obama administration decided "war on terror" was too provocative a label for what might be better dubbed "overseas contingency operations." Apparently, they were thinking a kinder, gentler image would discourage terrorists.

Accordingly, the self-confessed architect of Sept. 11, Khalid Sheikh Mohammed, was promised a civil trial in New York rather than a military tribunal normally accorded to out-of-uniform murderous terrorists. Expect a lot of soapbox speechmaking about America's sins during his testimony in 2010.

As part of our efforts to break with the Bush anti-terrorism past, President Obama also vowed he would close the facility at Guantanamo Bay by Jan. 22, 2010 -- another deadline that won't be met.

But as 2009 ended, we were reminded that radical Islamic terrorists still want to kill us for who we are, and what we represent, rather than any particular thing we do.

Maj. Nidal Hasan, nursed on radical Islamic doctrine, murdered 12 fellow soldiers and one civilian at Ford Hood, Texas. Five would-be terrorists with U.S. citizenship were arrested in Pakistan on their way to link up with Islamist militant groups. And Umar Farouk Abdulmutallab was stopped in flight from Amsterdam before he could blow up an American passenger jet.

Note that all these recent terrorists were not poor, lived in the hospitable West -- and cared little that the Obama administration has been critical of the U.S.'s prior war-on-terror policies.

So, while we assured the world in 2009 that we wouldn't be overzealous in our various efforts to stop terrorists, the terrorists proved they most certainly would be in theirs to kill us.

Meanwhile, at home we operated on the same naive assumptions. The Obama administration inherited a $500 billion deficit and expanded it threefold. Its planned mega-deficits may well grow the aggregate national debt over the next decade to over $20 trillion.

But the administration's 2009 calculations on how to service the growing red ink are based on continued cheap interest. Yet in 2010, it is likely we will see rising inflation, rising interest rates -- and rising costs to the continual self-destructive borrowing.

We were given a financial break on energy prices in 2009. The worldwide recession sent oil down to about $50 a barrel. But America did little during the year's reprieve to rush into production newly discovered domestic gas and oil fields, to tap existing finds in Alaska, or to license new nuclear plants.

By year's end, oil was creeping back up to $80. If the economic upswing continues, in 2010 it may near its old high of nearly $150 a barrel. Soon we will wish we had done something concrete in 2009 rather than offering more stale rhetoric about wind and solar power.

In other words, 2009 may seem to have ended relatively quietly. But in our foreign relations, in the war against terror, in our massive borrowing, and in our energy policies, we created chickens that soon will come home to roost in 2010.