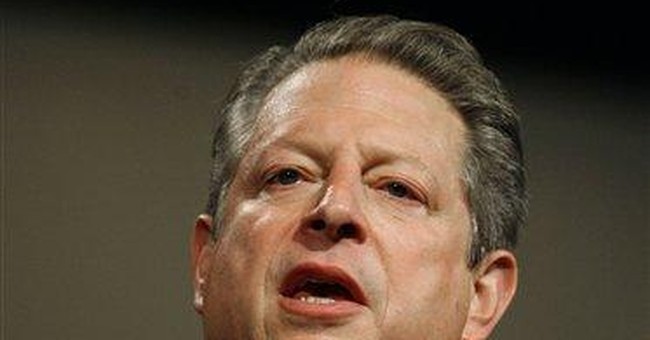 What more can anyone say about the 1960s and all its legacies?

Those who protested some 40 years ago often still congratulate themselves that their loud zeal alone brought needed "change" to America in civil rights, the environment, women's liberation and world peace. Maybe. But critics counter that the larger culture that followed was the most self-absorbed in memory.

Everyone can at least agree that the spirit of the "Me Generation" is not going quietly into the night -- especially since that generation ushered in a certain coarseness and self-righteousness that still plagues our politics.

Take grandiose sermonizing about changing the world while offering few practical details how to do it.

Al Gore recently prophesized that America within 10 years could generate all its electrical needs from "renewable resources and carbon-constrained fuels" -- mainly wind, solar and geothermal power (which currently together account for less than 10 percent of our aggregate production).

In truth, that daydream has about as much chance of being realized by 2018 as Al Gore this year swearing off the use of polluting SUVs and gas-guzzling private jets as he whizzes to his next environmental pulpit.

Barack Obama, a child during the '60s, is imbued nonetheless with that decade's "hope and change" messianic sermonizing. Now he wants a new mammoth government-funded "civilian national security force," one "that's just as powerful, just as strong, just as well-funded" as the Pentagon.

Sounds utopian, but at a time of record aggregate national debt, are we really going to borrow another half-trillion dollars a year to fund a kinder, gentler version of the military?

Gore and Obama may mean well. And we may someday rely mostly on wind and solar electrical power, and even benefit by having more aid workers abroad. But they discredit their proposals with '60s-style exaggeration and feel-good fantasies that cannot be realized as promised.

Another permanent '60s legacy is the assumption that the ends justify crude means. The so-called netroots bloggers often celebrate online with glee the illnesses or deaths of supposedly reactionary political opponents.

The crass anti-war group Moveon.org was not just content to object to Gen. David Petraeus testifying before Congress last autumn. In the fashion of 1960s agitprop, it had to go the next step in demonizing at a time of war our top-ranking Iraq ground commander as a traitor -- a "General Betray Us" as the group's ad in The New York Times blared.

Due to a "grassroots effort" to garner thousands of petition signatures, the city of San Francisco will have on the November ballot a measure to change the name of one of its water "pollution control plants" to the "George W. Bush Sewage Plant." What a national trend that would be! Should red states follow that pettiness and rename their own sewers and dumps after John Kerry or Bill Clinton?

We still suffer from the same 1960s juvenile petulance when the powers that be did not immediately fall in line as protestors demanded.

Now the spirit of that age permeates Congress, whose members won't drill oil off our coasts or the continental shelf, or in the Arctic National Wildlife Refuge. Yet in infantile fashion, they rant about "Big Oil's" high gas prices. So, Congress instead threatens to sue OPEC to be fairer and to pump more oil. And we beg the Saudis to drill and pump more in their waters so we don't have to in ours.

Even in the much-poorer 1960s, it was hard to take seriously the idea of loud middle-class suburban kids as street revolutionaries, given the fact that America was the richest and freest society in history. And it's even harder now when many of them are rich seniors and the country itself is far wealthier.

So when a member of the aging baby-boom generation finger-points at us that drilling oil is the moral equivalent of invading Iraq, or that America has become two nations (the haves and have-nots), we can often expect to discover that the self-righteous sermonizer is a hypocrite. Green Al Gore uses a lot more energy than the average American. Populist John Edwards lives in a huge mansion.

By now, we've grown accustomed to elites railing about America's pathologies from the comfort of their own privilege -- along with the usual ‘60s-style apologies that their own lives don't need to match their rhetoric, and that we should just concentrate on their near-divine messages. In their defense, they can't help it -- it's still a '60s thing.