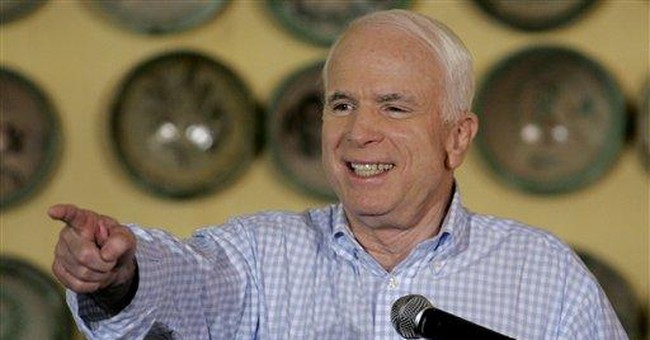 One way to envision the McCain-Obama presidential race is as a boxing match -- particularly like the famous Mohammed Ali championship fights.

The deliberate McCain is like a Sonny Liston or George Foreman trying to cut the ring in half and force his lighter-footed opponent onto the ropes. For McCain, this comes in the form of numerous proposed town-hall debates, where he hopes that face-to-face questions and answers will fall on his less-seasoned opponent like sudden haymakers.

In turn, Obama is like Ali; his style is to keep moving -- and stay out of reach of his opponent. Obama does this through rhetorically masterful addresses to large, adoring crowds. He knows that the more McCain is forced to spar at a distance via set speeches in front of a Teleprompter, the more he wears down the elder senator, who appears outclassed on the evening news.

Or maybe the better analogy is Aesop's fable of the tortoise and the hare. At 71, a slower McCain keeps plodding along at a steady pace, hoping that an overconfident, dashing Obama will rest on his wide lead in many polls, coast, make some more gaffes, and then let him crawl on by. Something like that happened in the Republican primary when the once dead-last, written-off McCain eventually walked past all his front-running rivals.

Pundits talk a lot about Obama's current 12-15 point lead in the recent L.A. Times/Bloomberg and Newsweek polls. Less noticed is that the two are dead even in the venerable Gallup survey -- not to mention that we have more than four months to go until election.

At some point, the steady McCain hopes crowds will tire of the glitzy “hope and change” rallies and demand that the soaring Obama comes down to earth to focus on more mundane, detailed positions that will alienate part of the electorate and so cut down his lead.

McCain must also feel like the mythical Menelaus, who tried to wrestle with the malleable Proteus, the sea god who turned into all sorts of different creatures to evade capture. Each time McCain thinks he can catch hold of Obama, the agile senator changes shape and slips away.

The embarrassing Rev. Jeremiah Wright? Obama has evolved from "I can no more disown him" to going well beyond that by quitting Trinity United Church of Christ altogether.

How about McCain's effort to tackle Obama as a blinkered protectionist who wants to overturn the NAFTA accords? No longer. Now Obama dismisses his recent protectionist talk as "overheated and amplified" rhetoric while campaigning in Midwestern primaries.

Can McCain the combat veteran still take down Obama as the liberal proponent of gun control? Nope. Obama says he supports the recent Supreme Court decision striking down Washington, D.C., gun laws -- attributing his earlier approval of similar gun-control legislation to the indiscretions of an aide who filled out a questionnaire wrongly.

McCain couldn't even hold the changeable Obama to his primary pledge to use public campaign funds, and thereby cut down his opponent's significant edge in private cash contributions. The cash-rich Obama has now sworn off public financing.

Horse imagery works for the two candidates as well. Obama seems more a youthful ("She rocks!" he shouts about Hillary Clinton to a crowd), frisky and sometimes impatient stallion. McCain is, of course, the old warhorse, his mobility curtailed from old wounds but still ready for combat.

McCain's sometimes-pained expressions show that he's been through all this before in the 2000 primary campaign against George Bush (not too mention weathering two terms in the House and four in the Senate). But for Obama, midway through his first Senate term, a presidential run must seem entirely new and fascinating.

This campaign is not just about liberal/conservative or Democrat/Republican. As voters, we have to ask ourselves other more fundamental questions this time around with two such antithetical choices: How do we define competency and leadership when a war veteran is set against an anti-war idealist, when one who has seen it all is challenged by one who still wants to see it all, when experience and deliberation are set against hope and change?

McCain and Obama are archetypes who transcend the usual politics. And that’s why we can evoke everything from boxing to the Ancient Greeks to figure out who should win.

But as the two candidates in the months ahead debate the war, energy woes and a troubled economy, the election will ultimately come down to whether more Americans think a workmanlike old pro can see us through one more time or more think the times demand we gamble on a charismatic newcomer who promises us deliverance.