Veronique de Rugy
|
Posted: Dec 13, 2018 12:01 AM
Share   Tweet
The opinions expressed by columnists are their own and do not necessarily represent the views of Townhall.com. 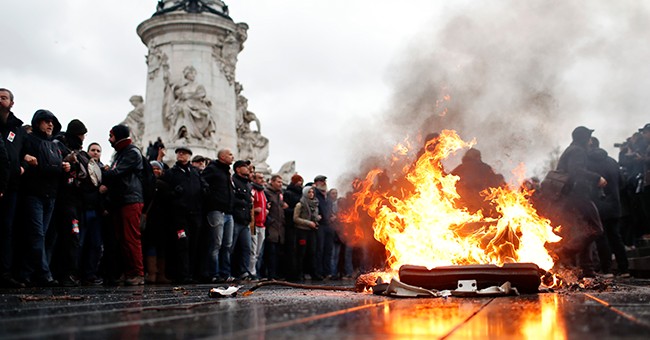 You know you've got a problem when your tax schemes are even being rejected by the French. While there's always a danger in reducing the causes of political unrest to a single issue, the plan to impose yet another regressive $9 billion annual carbon tax proved to be a catalyst for the "yellow vest" protests that are roiling Paris.

The nonviolent version of the French carbon-tax revolt is spreading globally, too. Last November, Washington state voters rejected a very well-funded effort to pass the first ballot-approved carbon tax ever. The province of Ontario is suing the Canadian government to block a federal carbon tax there. According The Wall Street Journal, "the issue could topple the Alberta government and perhaps Prime Minister Justin Trudeau." The Journal adds, "German Chancellor Angela Merkel's Energiewende -- a transition to renewables that has increased dirty coal emissions and caused household energy costs to soar -- has become a political liability."

The resistance comes from middle- to low-income workers. They're especially sensitive to changes in the cost and availability of energy for the simple reason that it affects so many aspects of their lives -- from getting to work, especially for those who live in rural areas, to the price of most consumer goods. It's clear that many ordinary people aren't willing to pay higher costs just to fulfill the grand visions of central planners.

In response to ongoing protests, French President Emmanuel Macron just announced he'll cancel the planned increases in fuel taxes that were supposedly going to put the country on target to hit its Paris climate accord objectives. Nevertheless, other proponents for massive tax increases are doubling down and calling for even more central planning with the hope of drastically remaking modern economies in a manner that they believe will be friendlier to the environment.

Billionaire Tom Steyer claims that the real issue highlighted by the French protestors is inequality, and that the answer isn't to stop trying to tax people into behaving in an approved manner but to ensure "unionized, living wage jobs."

I'm guessing Mr. Steyer isn't terribly familiar with France, where extreme regulatory burdens of the type he prefers already exist and make employees extremely costly. The predictable result is a ghastly 9-plus percent unemployment rate (21.5 percent for youth) that has barely budged in decades.

But Steyer, a frequent advocate of raising the cost of energy in the United States, surely sees how the unrest in France and elsewhere threatens the political viability of his agenda, which boils down to engaging in regular takedowns of natural gas and strong pushes for us to "invest in" -- by which he means direct even more government spending toward -- wind and solar power.

Never mind that that the natural-gas boom, by displacing reliance on dirtier coal, is part of the reason why the United States is a consistent leader in year-to-year reductions in carbon emissions. And the growth of liquefied natural gas as a U.S. export is poised to help more of the world do the same.

Others have even bigger dreams. An old hobbyhorse of the left, the so-called Green New Deal, is also getting renewed attention. As with many of the terrible ideas floating around Washington, D.C., these days, this one has found a champion in the recently elected socialist representative from New York, Alexandria Ocasio-Cortez. Like the original New Deal under President Roosevelt, it promises massive new government spending and across-the-board government interventions.

FDR's plan included compulsory unionism, attempts to establish monopolies, massive public-works projects, and wage and price controls. But his central planners lacked the knowledge necessary to control the market, as any one person or group of individuals necessarily does. Many economists now blame FDR's interventions for prolonging the downturn. A Green New Deal would almost certainly fail for the same reasons that FDR's New Deal failed and precipitate economic disaster.

Environmentalists are also using the courts to thwart energy exploration and development. Lawsuits have once again stalled the long-delayed Keystone XL project, and now the Atlantic Coast Pipeline. The latter is poised to address the mid-Atlantic's growing need for power by bringing natural gas into Virginia and North Carolina from West Virginia, and has seen its construction halted on account of legal challenges.

However, using every means necessary to obstruct development of energy sources deemed insufficiently green looks increasingly like an electoral loser. Voters and taxpayers seem to have little taste for climate-change policies that raise their cost of living and hurt the economy.