Are Health Officials Strangling the Lesser of Two Evils for the Benefit of the Greater?

Veronique de Rugy
|
Posted: May 24, 2018 12:01 AM
Share   Tweet
The opinions expressed by columnists are their own and do not necessarily represent the views of Townhall.com. 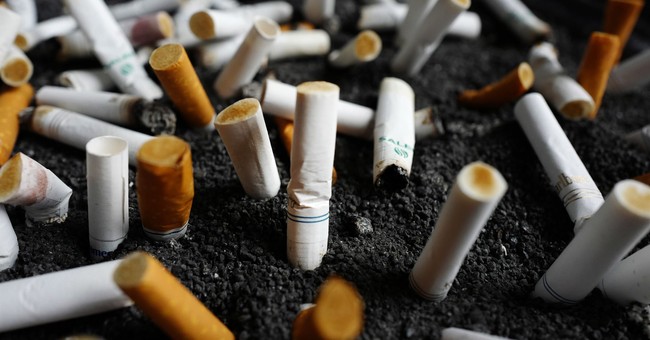 Tobacco kills 480,000 people a year in the United States. Yet when an innovative alternative that delivers nicotine and eliminates 95 percent of the harm of smoking is available, the wary Food and Drug Administration fails to embrace this revolutionary lifesaving technology. All in the name of the children, of course.

Using e-cigarettes, known as vaping, has been around long enough for respected health authorities to conclude after many studies that it is eminently safer than smoking cigarettes. Britain's Royal College of Physicians called any attempts by public officials to discourage smokers from switching to vaping "unjust, irrational and immoral."

By contrast, in America, the sudden popularity of a new e-cigarette called Juul has people who think they have a right to dictate what we can and cannot do with our own bodies freaking out. They want to decide how much risk we can take with our own lives. Apparently, the promise of safer nicotine delivery to the 38 million cigarette users in this country -- that's after 2 million already quit thanks to vaping -- isn't enough.

In a ridiculous twist, as detailed in a recent City Journal article by John Tierney titled "The Corruption of Public Health," public health officials are mounting a disinformation campaign against vaping that threatens to obscure the tremendous health benefits of consuming nicotine without the hundreds of toxins and dozens of carcinogens in cigarettes. Sen. Chuck Schumer, D-N.Y., recently joined the fight and demanded that the FDA start regulating the industry now -- rather than in 2022 as planned -- to put a full stop to the "e-cig addiction among New York adolescents." Unfortunately, these demands have sprung the agency into action -- for the children.

As it turns out, reducing health risk isn't really the goal of these agencies. The true goal seems to be stopping nicotine consumption, period. This would be funny if it weren't so tragic. First let me state the obvious: It's a preposterous notion that a government that can't efficiently deliver the mail or run trains on time -- and is a direct cause of cancer drug shortages -- can deliver a risk- and nicotine-free world.

Second, we have learned the hard way that no matter what the government does and no matter how much money it spends, people will still find ways to do and buy the things they want, even if it is detrimental to their health. The failures of the war on drugs and alcohol prohibition are prime examples. Moreover, this type of paternalistic mindset can have dramatic unintended consequences.

Third, Juul has already committed $30 million to fight the underage consumption of its products, which indicates that it takes this issue seriously. Besides, the government has a lot of practice regulating alcohol and tobacco consumption for underage buyers. If it works well enough for those two types of products, why not e-cigarettes? What's so different? Why kill the product altogether as some are pressuring the FDA to do?

Fourth, no one wants teens to vape, but we certainly don't want them to smoke cigarettes and die an agonizing death later in life. As a parent, I tell my children that they shouldn't do either. But the truth is that I know, as do they, that if they are going to do something as stupid as committing so much of their money to that sort of activity, vaping is the way to go.

The bottom line is that government alarmists should back off. The first step is for the FDA to stick to its plan to postpone regulation until 2022 and create a clear pathway for the permanent approval of these products. It would allow the vaping companies time to establish their products as a safer alternative to cigarettes. This kind of permissionless innovation approach gave us the internet and many other lifesaving and growth-producing inventions. This time, it might very well deliver the biggest lifesaving opportunity we have had in some time, as long as the FDA doesn't get in the way.