To Infinity and Beyond: Are Trillion-Dollar Deficits the New Norm?

Veronique de Rugy
|
Posted: Apr 12, 2018 12:01 AM
Share   Tweet
The opinions expressed by columnists are their own and do not necessarily represent the views of Townhall.com. 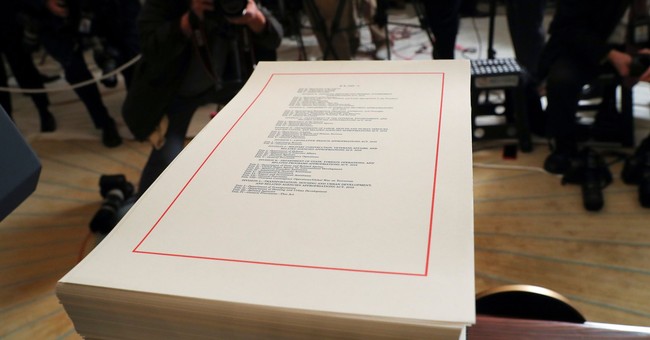 Trillion-dollar deficits are coming back faster than originally projected. Though it's fair to complain about the impact of the recently enacted tax cuts on our red ink, the ultimate culprits for our upcoming debt crisis are lawmakers who continually refuse to reform entitlement programs.

Consider the numbers. According to the Congressional Budget Office's newly released report titled "The Budget and Economic Outlook: 2018 to 2028," the U.S. deficit will reach $1 trillion by next year. That's three years sooner than projected last year. This year's deficit projection was also revised, increased to $804 billion, or about $300 billion more than projected last year. By 2028, the deficit will be north of $1.5 trillion. Ouch.

These amounts are quite large by historical standards. Between 2022 and 2025, deficits as a share of gross domestic product will be 5.1 percent. As CBO notes, "that percentage has been exceeded in only five years since 1946." For perspective, the authors add, "four of those years followed the deep 2007-2009 recession."

That's why these statistics should be utterly shocking; we're not in a recession. In stark contrast, the CBO projects very healthy growth numbers. Yet federal spending is projected to exceed 23 percent of GDP by 2028. It has historically fluctuated around 20 percent of GDP.

Revenues will fall slightly as a share of GDP following the 2017 tax cuts, before recovering to their historical average by 2025 and exceeding historical averages thereafter. In other words, we have a spending problem first and foremost.

Deficits are now the norm, and the level of federal debt held by the public will continue to mount as the interest on that debt consumes ever-larger amounts of the federal budget. Based on current trends, the debt held by the public is set to reach $15.7 trillion by the end of this year and continue rising to $28.7 trillion by 2028. Also far ahead of schedule, our debt-to-GDP ratio is expected to reach 100 percent by 2028. This level of projected debt is the highest since World War II.

There are real consequences to this mounting debt. First, unless lawmakers control their spending addiction, the United States will have less flexibility to pump up the economy during a downturn or an emergency. Second, as a new study by economists at the Federal Reserve Bank of Dallas finds, a rising public debt-to-GDP ratio harms economic growth. The study looks at a panel of 40 advanced and emerging economies and four decades of data. The economists find that "a persistent accumulation of public debt over long periods is associated with a lower level of economic activity."

In other words, more debt means lower growth and ultimately fewer employment opportunities for future generations. That's because the debt has a negative impact on private-sector investment, productivity, wages and interest rates. This nasty combo comes with a side of higher taxes, of course.

Most people agree that it's time to act. How to act, however, is still a source of disagreement. Take a recent op-ed in The Washington Post by renowned liberal economists Martin Neil Baily, Jason Furman, Alan Krueger, Laura D'Andrea Tyson and Janet Yellen. They argue that the country is indeed heading toward a debt crisis and that it's mostly because of the recent tax reform. Not surprisingly, they recommend jacking up taxes to address this problem. Anyone who has looked at a CBO document in the past 20 years should know how bizarre that conclusion is.

The Manhattan Institute's Brian Riedl has issued a data-driven and informed rebuttal, in which he demonstrates that the coming debt crisis is overwhelmingly and undeniably the result of the coming Social Security and Medicare deficits. He writes, "CBO's Long-Term Budget Outlook shows that between 2017 and 2047, Social Security and Medicare will run a cash deficit of $82 trillion." He adds, "The rise in Social Security, Medicare, and resulting interest costs from 8.1 percent to 16.4 percent of GDP between 2017 and 2047 determines nearly the entire rise in budget deficits. The subsequent tax cuts (perhaps one percent of GDP) do not negate this broad narrative."

The bottom line? Our debt is growing, and it's growing fast. Though it's a shame that lawmakers passed tax cuts without cutting spending to offset short-term losses in revenue, there's no doubt that Social Security and Medicare deficits are almost entirely to blame for our impending debt crisis. It's time to wise up and reform these programs.