Should the United States Stop Cooperating With the OECD?

Veronique de Rugy
|
Posted: Apr 14, 2017 12:01 AM
Share   Tweet
The opinions expressed by columnists are their own and do not necessarily represent the views of Townhall.com. 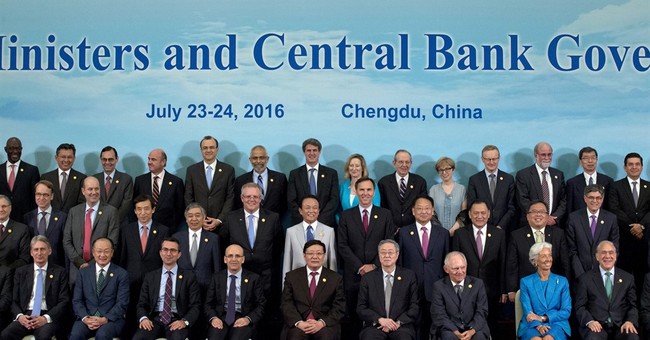 How would you feel if I told you that we taxpayers are spending millions of dollars every year to fund an army of bureaucrats who advocate higher taxes and bigger government around the globe? That's exactly what the United States does when it sends its contribution to the Organization for Economic Cooperation and Development.

Last year, as its single largest contributor, the United States sent $77 million to the OECD. That's 21 percent of the Paris-based bureaucracy's $370 million annual budget. Add to that amount several million dollars of additional expenses for special projects and the U.S. mission to the OECD. In theory, the OECD is a place "where the governments of 34 democracies with market economies work with each other, as well as with more than 70 non-member economies to promote economic growth, prosperity, and sustainable development."

And to be fair, the OECD's website will occasionally publish papers laying out the theoretical benefits of economic growth and smaller-government policies. However, in practice, despite the OECD's reliance on American taxpayer funds, it persistently works against U.S. interests by arguing for international tax cartels, the end of privacy, redistribution schemes and other big-government fantasies.

Take its campaign for tax harmonization, for example. It started as a way to shelter high-tax nations from bleeding more capital to lower-tax jurisdictions. You see, in the minds of OECD bureaucrats, high-tax nations are entitled to all they can extract from people and companies. This means that individuals shouldn't be allowed to legally shift economic activity to jurisdictions with better tax policies if such actions hinder the ability of big governments in Europe to feed their domestic fiscal beast. In other words, the OECD may recognize that competition is good in the private sector, but it wants cartelization policies to protect politicians.

With that in mind, in 2000, the OECD designated 41 nonmember countries and territories as "tax havens" guilty of supposedly unfair tax competition, simply for having lower tax rates and a healthy commitment to financial privacy. These countries were asked to promptly discontinue their "unfair practices" unless they wanted to face financial protectionism imposed by OECD member countries. The goal was to pressure low-tax countries into either increasing their tax rates or becoming deputy tax collectors for high-tax European nations through automatic information-sharing schemes.

Helped by the European Union and the United Nations, the bureaucrats even started clamoring for the creation of something akin to an international tax organization, global taxes and more explicit forms of tax harmonization.

Unfortunately, after years of abuses and bullying, the statists have made tremendous progress. For instance, all targeted jurisdictions have agreed to sign tax information exchange agreements, hence weakening their human rights laws on financial privacy.

Though we're not the ones directly targeted, American taxpayers should care about the OECD's campaign for a few reasons. First, the United States is one of the biggest tax havens in the world, and the Europeans are already pressuring us to comply with awful policies. Second, tax harmonization results in an overall higher-tax environment and a weaker global economy. Without the checks on political greed that competition affords, we inevitably suffer.

But that's not all. Now the OECD is targeting American corporations with excessive and expansive new reporting requirements, for the sole purpose of a massive tax grab. As David Burton of The Heritage Foundation has reported, this also puts trade secrets unrelated to tax assessment into the hands of unscrupulous governments and makes proprietary data vulnerable to unauthorized access by third parties.

The Cato Institute's Dan Mitchell has spent years documenting the disingenuous and downright statist work by the OECD. Among other issues, he found that OECD bureaucrats have repeatedly tried to undermine efforts in several countries to eliminate government red ink while pushing for Keynesian spending binges. They also make unsubstantiated claims that, in Mitchell's words, "higher taxes would lead to more economic development or more public goods" and that "a nation isn't developed unless taxes consume at least 25 percent of GDP." I bet you didn't know that the United States isn't developed yet! Here's the best part: They make all these claims about the need for more taxes while earning tax-free and outsize salaries subsidized by the United States.

For all these reasons, it's time for us to zero out this line in our budget. Let taxpayers in high-tax nations subsidize the OECD.