Veronique de Rugy
|
Posted: Feb 09, 2017 12:01 AM
Share   Tweet
The opinions expressed by columnists are their own and do not necessarily represent the views of Townhall.com. 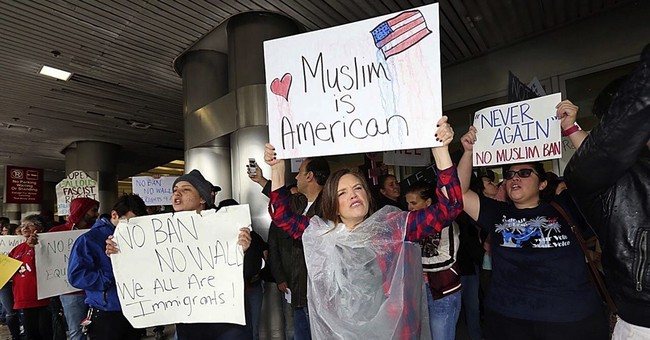 President Donald Trump is unhappy that a federal judge put the kibosh, at least temporarily, on his executive order blocking immigrants and other travelers from seven majority-Muslim nations. Though the order was framed as something to address a national security issue, it became clear very quickly that one of its most immediate impacts was denying legal workers, who pose no security threat, the ability to leave and re-enter the country -- at great cost to them, their employers and the country's productivity.

Both sides can debate the validity of a temporary and rushed ban on refugees and other would-be immigrants from the seven covered countries in the name of national security, but it's hard to justify applying the same restrictions to workers in the United States on visas from these same countries. As long as the potential to be denied the right to return remains, they essentially cannot leave the United States for any reason, even to visit an ailing relative. Those who happened to be out of the country when the order was signed also could not return, leaving employers without many of their workers.

The fact that the hastily constructed and implemented order is now in legal limbo only exacerbates the pain it's causing foreign-born workers. Should the order be reinstated, any potential remedy must wait until the legal issues are resolved. But even if it is reinstated, there is at least a hope that common sense will prevail and some of the more pointless damage can be avoided.

That's what Microsoft is hoping to achieve with a letter the company sent last week to Secretary of Homeland Security John Kelly and Secretary of State Rex Tillerson, asking for exemptions for visa holders working in the United States. The company notes that it has 76 employees with non-immigrant visas and calls for the creation of an exemption for "responsible known travelers with pressing needs" that would allow those contributing to the U.S. economy who have no criminal record and who are sponsored by an American company to continue coming and going as needed. Microsoft argues the executive order gives the secretaries of state and homeland security authority to create exemptions when in the national interest.

Allowing in workers who contribute to the economy most certainly qualifies as being in the national interest. And it's not just Microsoft and the high-tech industry. For instance, there are more than 8,000 U.S. doctors who were trained in the countries covered by Trump's order.

Protectionists would no doubt question the benefits these individuals provide, but the evidence shows that immigrant workers, even those in low-skill jobs, are a net positive to the economy. In fact, many of the innovations and innovative companies that make this country better -- and our lives as Americans easier -- were created by immigrants.

Of course, not everything is about numbers. Microsoft's president says that some of his company's workers have had their families broken up by the executive order. There are basic humanitarian reasons not to treat those who come to America for a better life like criminals, particularly when they have already demonstrated a desire for nothing more than pursuit of the American dream.

Unfortunately, this order may be the sad precursor to more restrictive policies that make it more difficult to bring in not only low-skilled but also high-skilled workers. A draft executive order circulating in Washington proposes to re-examine how the government issues H-1B visas for skilled workers -- the visa with which I got my first job at the Cato Institute. To be fair, there are many executive orders in circulation that will never see the light of day. But I wonder whether the reason this ban targeted even clearly vetted, high-skilled visa holders is the Trump administration's negative disposition to even legal immigration.

This is causing a lot of companies to refrain from hiring even high-skilled foreigners, lest the administration change the rules governing them (e.g., forcing employers to pay more than prevailing wages as Sen. Tom Cotton, R-Ark., suggested -- or worse).

No one questions that the president is empowered to protect the country, but some measures are clearly counterproductive. This is one of them.