Vernon Robinson III
|
Posted: Jun 24, 2020 1:58 PM
Share   Tweet
The opinions expressed by columnists are their own and do not necessarily represent the views of Townhall.com. 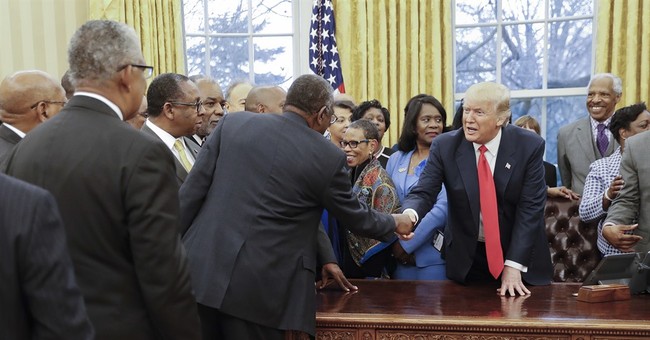 Editor's Note: This column was co-authored by Bruce Eberle.

Which party is the party of racism today? Which party offers real solutions to real problems?  And which party offers symbolism over substance? “While Democrats have long postured as defenders of black Americans, a closer look at their actions shows there’s a lot of the symbolism but very little of the substance.”

When black entrepreneurs are having their businesses destroyed by rioters and looters, what do Democrats do?  They do their best to divert attention away from the fact that the problems faced by black Americans in our major cities have been caused by Democrat politicians who have run these cities for decades and decades. They don’t want to talk about that, and they make no attempt to solve the problems. Instead, like Virginia Governor Ralph Northam, they offer symbolism over substance.  They divert attention away from the problems they have caused.  They do this by talking about taking down statues, changing the names of streets, changing the names of military bases, or removing statues from the United States Capitol.  They do this knowing full well that not one of these things will in any way help the plight of black Americans struggling to escape poverty. But because they have the support of the news media, they are able to divert attention away from these calamities they have caused.

They don’t want black Americans to ever know that it is Democrat politicians who pour millions of tax dollars into Planned Parenthood that targets black babies for abortion. They don’t want African Americans to realize that it is Democrats who stand in the school house door blocking high performance choice schools for black children. This is perhaps their most heinous sin of all, keeping a poor black child from the one thing that will help him escape poverty, a good education.

Democrats also don’t want you to know that they are the ones in these big cities that create beauty salon, barber shop, and taxi monopolies that exclude or set impossibly high barriers of entry for black entrepreneurs.

Our question is: If the Democrats really, truly care about black Americans, why do they support Planned Parenthood, block good schools for black children, drive up the cost of energy through support for a pie-in-the-sky “Green New Deal”, deny Second Amendment rights, and allow illegal immigrants to take black jobs and drive down their wages?

Excuse us, but when the Democrats do these things and know the consequences, isn’t that racism?  How else can you define it?  And when you use the power of government to do these things, isn’t that systemic racism?  By any fair and honest measurement, today’s Democratic Party is the home of racism in America today.

Little has been done by Democratic presidents to help black Americans.  For eight years President Obama talked about prison reform, but President Trump did it in his first term.  Not only did Donald Trump sign prison reform into law, he combined that with job training and jobs for newly released non-violent and non-sexual black felons.

Additionally, Donald Trump and Republicans in Congress dramatically cut taxpayer funding of Planned Parenthood, appointed judges who believe in the Constitution, slashed regulations, and reduced taxes making it possible for black entrepreneurship to grow by 400% between 2017 and 2018.

Even more significantly, Donald Trump implemented economic policies that created the lowest black unemployment in recorded history. He created enterprise zones that brought job opportunities closer to where black Americans live. He pushed hard against the Democrat opposition to putting top notch choice schools in black communities. And he dramatically expanded support for historic black colleges and universities (HBCUs).  As pastor Darrell Scott said of Trump, he is “the most pro-black president that we've had in our lifetime.”