Vernon Robinson
|
Posted: Jan 20, 2020 9:30 AM
Share   Tweet
The opinions expressed by columnists are their own and do not necessarily represent the views of Townhall.com. 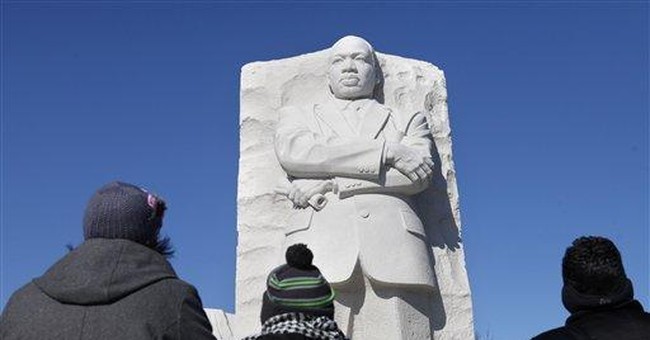 Editor's Note: This column was co-authored by Bruce Eberle.

While Abraham Lincoln freed the slaves, and Republicans passed the 13th, 14th, and 15th amendments to the United States Constitution as well as the civil rights act of 1875, it fell to Dr. Martin Luther King, Jr. to actually bring about full citizenship rights for black Americans. Booker T. Washington had advanced the cause of black Americans into the twentieth century, but the situation worsened as progressives introduced segregation in the South that then spread to virtually the entire nation.

These progressive intellectuals who orchestrated segregation were certain that science proved black Americans to be inferior to white Americans. Edward Ross, a Ph.D. from Johns Hopkins University, wrote in 1901 that “The superiority of a race cannot be preserved without pride of blood and an uncompromising attitude toward the lower races.”[i] Ross further, “advised progressives to discard the sentimental, religious equalitarianism of the old abolitionists and base their ideas of reform on hard science.”[ii] The hard science that Ross referred to was, of course, not science at all, it was just an ideologically warped justification for segregation.

And, to keep black Americans from voting progressives in the South used poll taxes and literacy tests to deny them their full rights as citizens under the 15th Amendment. The evil of segregation endured until one man, Dr. Martin Luther King, Jr. led a massive civil rights movement in the 1960s. That movement was amazingly successful, but it cost Dr. King and others their lives to secure voting rights and an end to the corrupt policies of segregation that held black Americans back from having the opportunity to fully enjoy the American Dream. Because of his efforts the United States Congress passed the Civil Rights Acts of 1957, 1960, and 1964 as well as the very important Voting Rights Act of 1965. Dr. King worked with both Republicans and Democrats to advance the cause of civil rights. When Richard Nixon fought hard for the Civil Rights Act of 1957 (only to see it effectively neutered by Lyndon Johnson and the Southern Caucus) he still received these encouraging words from Dr. King:

“Let me say how deeply grateful we are to you for your assiduous labor and dauntless courage in seeking to make the Civil Rights Bill a reality. This has impressed people all across the country, both Negro and white. This is certainly an expression of your devotion to the highest mandates of the moral law.”

Not only Dr. King, but other Americans, black and white, gave their lives so that black Americans might have their full rights as American citizens. And, just because laws were passed, it did not mean that black Americans were fully accepted into American society. But, the foundation was laid for eradicating roadblocks to African American advancement economically, socially, and politically.

Too often politicians have looked upon black Americans only as a voting bloc to be manipulated and used to advance their causes. And, sadly those causes have too often affected black Americans negatively. While segregation may have been formally eradicated, in reality it still exists. The Great Society programs of the 1960s led by liberal Democrats successfully destroyed the intact black family, driving fathers from the home. This loss of male role models in the home caused far too many young black men to seek out gangs to prove their manhood.

The situation was further compounded when poor black children were denied high quality schools, education being the primary criteria to escaping poverty. Democrat politicians chose the money from the teacher’s union over the welfare of poor black children by blocking high quality school choice schools, while they send their own children to private schools. They also chose money from Planned Parenthood that targets unborn black babies. And, they callously disregard the impact of a flood of illegal aliens on the jobs and salaries of black Americans.

This year as we celebrate Dr. Martin Luther King, Jr. Day there is much good news. The Trump Administration has not only pushed hard for the introduction of high quality schools into poor black communities, but also signed into law the First Step Program granting early release from prison of nonviolent offenders and setting up programs to facilitate a successful transition to a good job after their release.

Perhaps more important, Donald Trump has severely curtailed the flood of illegal aliens that steal jobs from black Americans and drive down the wages of those who have a job. On top of that, we can all celebrate the fact that the roaring economy we are all now enjoying has driven black unemployment to its lowest level in recorded history, and raised black wages significantly.

Martin Luther King, Jr. famously said, “I have a dream that my four little children will one day live in a nation where they will not be judged by the color of their skin but by the content of their character.” Great progress has been made toward the realization of that dream. That progress is not due to the efforts of Republicans for Democrats, but to the ongoing efforts of black Americans whose strong faith in God, and capacity to forgive are helping to bring our nation together.