Martin Luther King, Jr.’s Legacy Is as Important to Remember as Ever

Vernon Jones
|
Posted: Jan 18, 2021 12:02 AM
Share   Tweet
The opinions expressed by columnists are their own and do not necessarily represent the views of Townhall.com. 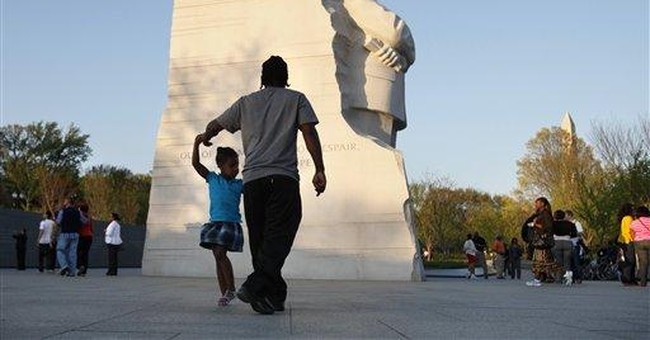 As we celebrate the life of Dr. Martin Luther King Jr., let us not forget the principles for which he stood—the sanctity of life and the family, the importance of violence-free protest and a healthy respect for the Constitution.

Dr. Martin Luther King, Jr. was a fighter. He believed in fighting tirelessly on behalf of what was right, and on behalf of those who could not fight for themselves. That’s why I’m convinced Dr. King, like me, would be Republican if forced to choose between the two major parties.

A society is judged by how it treats its most vulnerable. Dr. King’s vision of the future is an America where each and every child has a chance to achieve the American Dream by working hard and playing by the rules. That’s why I’m convinced Dr. King would support school choice and every child and parent’s right to determine their own future and economic outcome.

Dr. King also understood the importance of free and fair elections, as the very existence of a Democracy depends on a secure voting system. “Let us march on ballot boxes until race-baiters disappear from the political arena,” Dr. King said March 25, 1965, following the conclusion of the Selma march to Montgomery.

It is my hope that President-Elect Joe Biden’s views on mass incarceration has evolved since the 1990s, when he supported policies that decimated black communities and families across America.

In fact, it grew painfully clear throughout the 2020 campaign cycle that Biden, along with the Democrat Party, was less interested in actually solving the problems faced by the black community, than just highlighting them and laying blame at the feet of Republicans as if it were a partisan issue. The truth is—Biden, the Democrat Party and the entire permanent Washington political class benefits from the status quo. They promote a victimhood mentality in the black community, and label anyone with a differing opinion or independent thought as a traitor to their own race, in order to keep the community “in line.”

"If you have a problem figuring out whether you're for me or Trump, then you ain't black," Biden told the hosts of the popular Breakfast Club radio program in May. Even the words of a former Vice President matter too.

Biden’s comments at the time revealed the arrogance, condescension, and racist mindset when it comes to how many in the Democrat Party perceive the black community—you’re going to shut up and support us because that’s what is expected from you.

This shouldn’t shock anyone. White liberals have long dictated who from Black America is allowed to have a voice at the table.

Let’s pray that President-Elect Joe Biden, along with Vice President-Elect Kamala Harris and the entire incoming administration, offers a message of unity and togetherness to ensure the tens of millions of Americans who feel left out and forgotten are included in the national dialogue as we move forward as a nation.

The answers to America’s problems won’t be solved in Washington, D.C. It is up to all of us to take a stand and voice our commitment to life, liberty and the right of every American to pursue a rich and fulfilling life.

I hope others are inspired by Dr. King’s commitment to changing the world for the better, through civic engagement, peaceful protest and an unyielding spirit.