"No" Is Why America Elected Republicans

Tony Katz
|
Posted: Feb 15, 2016 9:07 AM
Share   Tweet
The opinions expressed by columnists are their own and do not necessarily represent the views of Townhall.com. 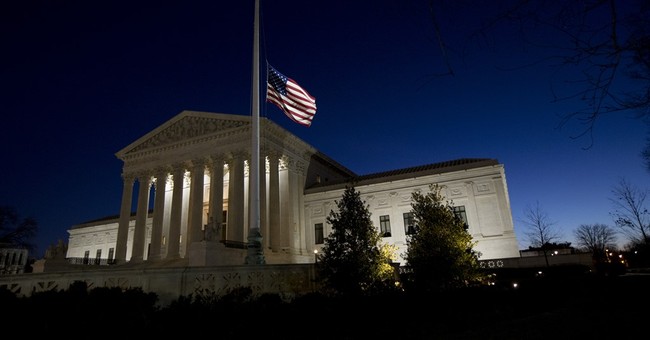 The death of Supreme Court Justice Antonin Scalia at 79 has been a gut punch for those who follow the Constitution, and a reason for glee from those who celebrate the death of anyone who disagrees with them. Also, allegedly, it has created a constitutional crisis of monumental proportions as Democrats demand the GOP-controlled Senate confirm whomever President Obama decides to nominate to fill the position.

But there is no crisis. There is only one word: No.

Why am I so confident in how clearly and effortlessly the GOP should say "No?" Because the Democrats have already done it.

The Internet is amazing. If you search hard enough, more often then not you'll find what you're looking for. Digging through the volumes of history compiled over the lifetime of man, one had to go back to ancient times to find proof of an appointment held up by a political party for political reasons and political purposes.

Meet Miguel Estrada. A very talented legal mind who had been nominated by President George W. Bush in May of 2001 to serve on the US Court of Appeals in the District of Columbia.

Democrats had nothing but disdain for Estrada, a Honduran immigrant who would have been the first Hispanic to sit on the Court. So, they filibustered his nomination for two years. Two. Years. Eventually, Estrada withdrew his name from consideration, as the need to get a job and support his family became paramount.

Democrats were overjoyed. Sen. Chuck Schumer, the shame of New York, said that Estrada had to be objected to because he was, "far beyond the mainstream." In Democrat speak, that label gets placed upon anyone who isn't a Democrat. (See; the Borg.)

The late Senator Edward Kennedy was elated, stating that Estrada's withdrawal was a, "a victory for the Constitution."

It reflects a clear recognition by Miguel Estrada, and, hopefully this White House, that under the Constitution the Senate has shared power over judicial appointments

Well, I'll be! The Chappaquiddick Kid just gave us a bit of truth. No, not a bit, the whole truth and nothing but; A complete and detailed understanding and explanation of Checks and Balances (which, if you're an Obama fan, you know nothing about, and will make you so angry once you learn about it that you'll have to run to your safe space.)

On Twitter, lots of people have been confusing the concept of nomination with that of appointment. Non-sensical males like self-professed "academic" Marc Lamont Hill stated:

Expect the Republican Party to conjure a million absurd reasons why the next President, and not Obama, should appoint Scalia's replacement.

What's absurd is Hill's prideful ignorance of what the Constitution of the United States actually states.

Senate Minority Leader Harry Reid (D-NV) said, "Failing to fill this vacancy would be a shameful abdication of one of the Senate's most essential Constitutional responsibilities."

Not to be outscored by the man who viewed the Senate as his own little fiefdom, Hillary spoke out on Twitter, stating, "The Republicans in the Senate, and on the campaign trail, who are calling for Justice Scalia's seat to remain vacant dishonor our constitution."

(As opposed to private email servers and letting Americans die in Benghazi, which are totally actions of honor.)

Then, she goes for the touchdown:

The Senate has a constitutional responsibility here that it can not abdicated for partisan political reasons.

First, Kennedy and Schumer prove that the Senate can be used to block nominations for partisan political reasons. They did it. They crowed about it. They thought it was great!

Second, this is the Supreme Court. Everything it does is political. Every decision it makes moves our body politic. Every move of the Court has the direct opportunity to change the nation in an instant. (Like, for example, in Obergefell, when SCOTUS decided that rights can be created out of wholecloth.)

Is it political to deny any and all of Obama's potential Supreme Court nominees?

Can America really afford another Kagan or Sotomayor - two justices who have no interest in the case in front of them, but vote only in their rigid ideology? (When's the last time that anyone in the media asked how those two progressive Justices were going to vote? But they always ask, "What will the conservative justices do? As if the liberal vote is already written on the wind.")

America can't afford this type of three-peat. Republicans, therefore, must say No because that is what they were elected to do. They were elected to stop the very types of radical swings that Obama, Hillary, Hill and Schumer are frothing over.

"Elections have consequences," or so they once said. The Republicans control the Senate. (And, hopefully, principled conservatives and aware citizens who understand what's in the balance control the Republicans!) Republicans have a responsibility to those who elected them to stand firm in the face of demagoguery.

George Carlin used to do a fantastic routine about how people view their possessions, or "things." He said, paraphrasing, "Did you ever notice that your friend's stuff is s***, but your s*** is stuff?" Democrats think that when they do it, that's good stuff. But when Republicans do it, that's just s***.

Thus we get to the heart of the matter; what will Republicans do? Senate Majority Leader Mitch McConnell has already said there will be no nominees considered in Obama's last year. Here, McConnell has precedent as well; A lame-duck President has not nominated a Supreme Court justice in over 80 years.

McConnell must be held to his statement. Republicans need to say no. The country can not survive a Progressive party that pro-actively supports a Socialist for President because they think Obama is too much of a centrist, while having like-minded sots on the Bench for life!

Republicans (Conservatives!) must say no, and then move on to the other business at hand - cyber-security, jobs to end the continued unemployment, especially for black Americans and Millennials, the defense of all American citizens by protecting the border, destroying ISIS and killing every last member, pushing the prosecution of Hillary Clinton, defunding Planned Parenthood to end the horrific practice of selling baby body parts, saving Social Security through privatization and other possible methods, repealing Obamacare and replacing it with a market-driven solution that allows for selling across state lines, ending the failed Nuclear Deal with Iran and punishing them severely for the detention of our soldiers and getting the FDA out of walk-in humidors so law abiding citizens can enjoy a cigar and keeping them out of our soda cups and baked goods.

The answer, Democrats, is no. There will be no replacement for Justice Antonin Scalia while Obama is in office. To think otherwise is "pure applesauce."

The answer is no.