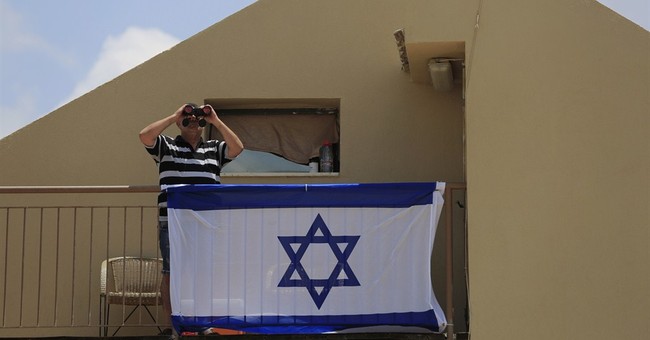 Apartheid in South Africa - the systematic, institutionalized racism that berated, belittled and exploited the black population - was horrific. It told black people that they are less than human. It insulted their very existence. It is an evil concept that has no place in any society. So why are so many progressives willing to dismiss the hate perpetrated on blacks, and use the term improperly to gain themselves a cheap political advantage?

Progressives use the term "apartheid state" to make themselves look good when castigating others; they willfully and gleefully misrepresent history, and mock those who suffered through a lifetime of being placed as second-class citizens. "No worries," says the Progressive. "As long as I attacked some Republicans. Besides, my friends think I'm super cool and super caring."

As Israel continues to defend itself against thousands of missle strikes thus far (if it weren't for the Iron Dome, there would be many more dead Israelis. And, it has been pointed out, one day the Iron Dome will run out of missiles itself,) protests are taking place around the world to call out the treatment of those in Gaza.

At an anti-Israel rally in San Francisco, self-described Palestinian-American (really?) Reem Salem stated, ""We will stop the racism and apartheid state of Israel, we will not stop. And we will continue to come out and have our voices heard,"

Nevermind the confusion of the stopping and the not stopping and if either will happen. Calling Israel an apartheid state is the norm.

From the Times of Israel, reporting on anti-Israel protests in London:

Meanwhile, in London, tens of thousands took part in a march from British Prime Minister David Cameron’s office to the Israeli embassy, carrying placards reading “Stop the bombing, free Palestine”, “Stop Israeli state terror, join the socialists” and “End Israeli apartheid,” while also chanting slogans, such as “Israel is a terrorist state,” and calling for a Palestinian state from the Jordan River to the Mediterranean Sea.

Secretary of State John Kerry referred to Israel as an apartheid state, saying, "A two-state solution will be clearly underscored as the only real alternative. Because a unitary state winds up either being an apartheid state with second-class citizens—or it ends up being a state that destroys the capacity of Israel to be a Jewish state,"

Secretary Kerry later apologized for those remarks, and challenged anyone who challenged him on his commitment to Israel to a rousing game of Toss The Medals. (The trick is, you never actually throw them, but everyone thinks you're super cool. Then, you milk that for all its worth and marry a billionaire!)

Calling Israel an apartheid state is to admit a total ignorance of history and an open desire to further insult black people world wide. Israel has no second class citizens. 12 members of the Israeli government are Arab. Arab women can vote (let's try that in Syria, shall we?)

Israeli law provides for religious freedom; 20% of the population is non-Jewish. As Alan Dershowitz once commented, "For the first time in Mideast history, there is an independent judiciary willing to listen to grievances of Arabs-that judiciary is called the Israeli Supreme Court."

In 1997, The New York Times ran a story about the torture of black men during South Africa apartheid. A low level officer, Jeffery Benzien, as his job, tortured people daily. In his own words, speaking about a man who was once a victim of the torture, ''If I say to Mr. Jacobs I put the electrodes on his nose I may be wrong,'' he testified. ''If I say I attached them to his genitals, I may be wrong. If I say I put a probe in his rectum, I may be wrong. I could have used any one of those methods.''

The right to vote vs. one torture victim asking Benzien, ''Do you remember saying that you are going to break my nose and then putting both your thumbs into my nostrils and pulling it until the blood came out of my nose?'' Israel is not an apartheid state.

Yet, the shameful use of the word apartheid state continues. However, it is not just when anti-Semites and anti-black bigots use it indiscriminately for their twisted means to attack Israel.

The Netroots Nation conference - a yearly convention for progressives and other left of center types - announced that the next event would take place in Arizona in 2015. Markos Moulitsas, who founded the Netroots convention when it was called The Yearly Kos, announced that his organization will not be attending and will not financially support the event.

Why? Because, according to Moulitsas, Arizona is an apartheid state for passing SB 1070; the Arizona law that allowed law enforcement, when engaged in a lawful stop, detention or arrest, to ask whether or not the person being stopped was in the country legally.

On his site, Moulitsas stated: (emphasis mine)

Netroots Nation announced two days ago that Phoenix, Arizona would host its 2015 conference. I wish the conference the best, but it will unfortunately take place without Daily Kos' attendance or assistance.

I made very clear in the wake of Arizona's passage of SB 1070 that I would not be setting foot in the state, nor spending a dime in it until the law was revoked. The law, however gutted...remains on the books, as does systemic harassment of Latinos...

We're taking the fight to the enemy I doubt the conference would decide to host the event in, say, Apartheid South Africa, in order to "take the fight to the enemy". If you think that analogy is absurd, it is, but only in terms of degree, not intent in the county that has consistently elected Sheriff Joe Arpaio since 1992.

In the eyes of Moulitsas, those engaged in a lawful stop by the police and classifying people based on their skin color, preventing them from getting jobs, forcing them to carry documents (when they were already citizens!) and limiting their involvement in the government that was systematically subjugating and enslaving them is the same thing.

When making the sick comparison of Arizona to an apartheid state, Moulitsas is creating moral equivocation between being forcibly removed from your house and having your land sold to white landowners without remuneration, and being asked a question in Tucson.

Apartheid is evil. It should never see the light of day in any society. Yet, amazingly, using apartheid to score political points is worse. It's an insult to every black person the world over. Progressives, by their own words, find it acceptable to minimize the painful history of black people for their own gain. They found a way to make evil worse.