Taxin’ Tim Kaine Pushed to Raise Taxes on the Poor

Toni-Anne Barry
|
Posted: Oct 03, 2016 1:13 PM
Share   Tweet
The opinions expressed by columnists are their own and do not necessarily represent the views of Townhall.com. 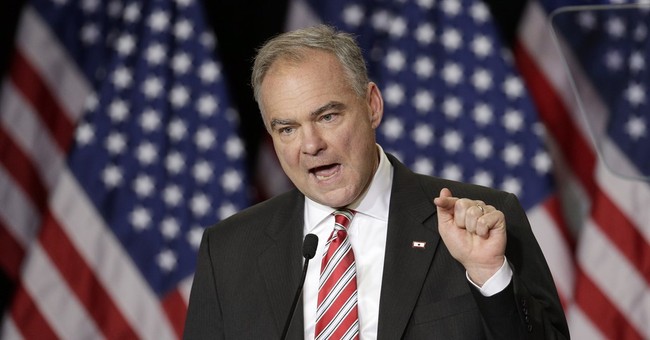 Ahead of Tuesday’s vice presidential debate there are some things you should know about Tim Kaine’s tax record while Governor of Virginia.

Kaine has a long record of pushing for tax increases. He attempted to raise $1 billion in taxes each year totaling $4 billion over his four years as governor. This helps to explain Kaine’s low approval ratings upon leaving office.

Despite running alongside Hillary Clinton who famously “pledged” not to raise taxes on anyone who makes less than $250,000 a year, Kaine has a history of posing income tax increases on people of all income levels. Kaine proposed raising income tax rates across the board. Virginians making as little as $17,000 would have seen a rate increase from 5.75 percent to 6.75 percent were it not for the actions of the Republican state legislature. If Kaine had his way every Virginia taxpayer would feel the effects of higher income taxes.

While the Clinton campaign is trying to paint Kaine as an “everyman,” what they really mean is that he wants to tax every man.

Kaine’s proposals for tax hikes didn’t stop with Virginia’s income tax rates. He proposed raising the tax rate on businesses that collected sales tax in Virginia from 4 percent to 4.3 percent. As if Hillary’s corporate tax plan wasn’t scary enough on its own, Kaine’s track record of pushing to increase Virginia’s business tax shows that the economy is going to take a hard hit if the Clinton-Kaine ticket reaches the White House. Across the country business owners are lacking incentive to expand their companies and potential entrepreneurs do not feel like they have the ability to innovate as it is. Crushing tax plans like Kaine’s would only hurt the economy even more.

But wait, if you’re planning on having a drink to wash that down, Kaine is ready to tax that too. Kaine pushed a 2 percent markup on all adult beverages sold in Virginia’s ABC stores. The markup is a tax because Virginia monopolizes where and when residents can buy their alcohol forcing every resident to pay the price increase. The tax increase would have siphoned $8 million from hard working Virginians. Drinks bought at bars and restaurants would also be subjected to the tax as they are required to buy alcohol from the state as well. Luckily the Republicans in the legislature stopped it.

Much like Kaine’s onerous alcohol tax, Kaine wanted to implement a cigarette tax that would directly harm low and middle income Virginians. Kaine sought to raise the price of each pack by $.60. This was yet another tax that Virginia Republicans had to prevent from being enacted.

On the top of the ticket, Hillary’s tax plan will raise taxes on the American people by more than $1 trillion over the next 10 years. With our slow economic recovery we need a pro-growth ticket and this tax hiking duo seem to think the only way to create revenue is to increase taxes. Clinton and Kaine are the most aggressive, high tax ticket to make a bid for the White House. Both have endorsed steep taxes that the American people will be forced to pay if they are elected come November.

On Tuesday night we will see two very different tax advocates on the stage. Kaine has tried to increase taxes every time he is faced with a problem while Mike Pence has shown that it is possible to balance a budget, decrease the unemployment rate, and much to Kaine’s dismay, provide funding for transportation improvements all without raising taxes. Governor Pence has even reduced the state’s flat rate income tax from 3.4 percent to 3.23 percent.

Tax-hike-Tim’s track record as governor proves that when there’s an opportunity to raise taxes, he will take that route. Don’t let his false “everyman” persona fool you. Tim Kaine will be a more than willing accomplice to help Hillary raise taxes on the American people.