Crime Heading to a Neighborhood Near You

Tom Tradup
|
Posted: Apr 05, 2021 9:10 AM
Share   Tweet
The opinions expressed by columnists are their own and do not necessarily represent the views of Townhall.com. 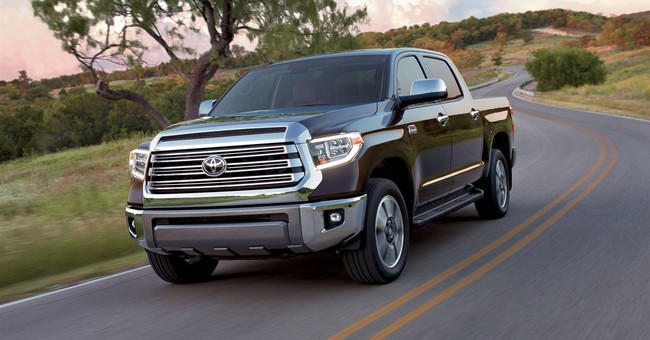 The eminent philosopher Lamont Cranston used those words to open each episode of The Shadow, a radio drama that ran on CBS from 1937 to 1954. Cranston—played on network radio by actor Orson Welles—would also ask the rhetorical question: “Who knows what evil lurks in the hearts of men? The Shadow knows!!”

My 24-year-old son also knows. He is only a day or so from the one-month anniversary of his new pickup being vandalized in a Dallas apartment complex by a miscreant who rendered it undriveable as part of a nationwide explosion of crime which—surprise—is heading your way soon.

On March 7th my son bought a new Toyota Tundra and, as you might expect, was thrilled with his sleek transportation and headed into Dallas to show it to his friends. When he returned to the parking garage in a buddy’s apartment, the vehicle was making strange noises and the Check Engine Soon light came on.

The tow truck driver who was called to return it to the car dealer where it was purchased took a look under it, and immediately diagnosed the problem: the Tundra’s catalytic converters—both of them—had been literally sawed off while the vehicle was parked in the apartment complex.

My son filed a crime report with the Dallas Police Department, suspecting it would go unnoticed in a major city that regularly deals with more than its share of challenges (including President Biden’s idiotic decision to transport over 2,000 illegals aged 14-17 from the U.S. border with Mexico in order to house them at the Kay Bailey Hutchison convention center in downtown Dallas.)

To our surprise, the report was not ignored; within several hours we heard back from a career DPD detective—a pickup truck aficionado himself—who commiserated over the loss and inconvenience, adding the startling information that my son had been only one of 52 catalytic converter thefts reported to Dallas Police in the past 24 hours!

Don’t believe him?  We didn’t either…so I Googled “catalytic converter thefts” and voila: 6,830,000 results popped up in a mere 0.86 seconds.  Any criminal with a garden variety hacksaw can easily jack up a car or truck and saw off a converter (which costs between $1000 and $2300 apiece to replace) in about 1-minute.  They then sell them on the black market for about $200, leaving drivers like my son to deal with the nightmare of police reports, insurance claims, repair shops and the inconvenience of losing their transportation for—in this case—almost a month. And counting.

And the creep who stole my son’s catalytic converters wasn’t particularly skilled at his craft, so he managed to sever several other essential parts which are all on “national back order.” From coast to coast, criminals have made stealing catalytic converters the new, super-spreader growth industry in America...with no end in sight in the pantheon of victims.

Law enforcement sources told me in confidence that there’s already a massive criminal network that involves recruiting young people (including illegal immigrants)…then ships the stolen converters they generate out of the country—mainly to Mexico and the Middle East—for resale because of the precious metal they contain, including some platinum. They indicated the massive influx of unaccompanied illegal teenagers would inevitably lead to many being recruited by MS-13 and other gangs as well for this type of criminal operation.

Despite all the infuriating agita this has put our family through, I am actually counting our blessings that my son—who like many Texans has his Concealed Carry permit—didn’t happen upon the slimeball while he was sawing his way through his converters in that parking garage. That might have meted out justice on the spot, but now we’d be dealing with far worse legal nightmares.

Instead (and I’m not proud of this) it is satisfying enough to see TV news reports from across the nation that increasing numbers of catalytic converter thieves are being crushed to death when vehicles including Prius hybrids and pickup trucks fall on them as they are attempting to steal car parts.

Meantime, those teenage illegals Biden shipped to Dallas are beginning to get cabin fever and—surprise!—have started slipping out of the convention center and are turning up in nearby neighborhoods and in convenience stores.

Nothing to see here folks, says the Biden administration. “On rare occasions, kids leave the shelters without permission,” a US Health and Human Services spokesperson said in an email. “On each occasion, authorities are notified and kids, usually, are transferred to another facility.” Usually, unless somebody decides to welcome them to America by giving them a hacksaw and directions to your city.  (Spoiler alert: you may be the next American to wait a month to get back on the road.)

But pay no attention to those 6,830,000 Google results about stolen catalytic converters, friends. The president has more important things with which to concern himself. Like getting Major League Baseball to move this year’s All-Star Game out of Atlanta because he doesn’t like Georgia’s new Voter Integrity laws. As the Atlanta Braves themselves observed after MLB caved to this political correctness:  “Unfortunately, businesses, employees and fans in Georgia are victims of this decision.”

I guess the “weed of crime” does bear bitter fruit after all.

Tom Tradup is V.P./News & Talk Programming for Dallas-based SALEM Radio Network.  He can be reached at ttradup@srnradio.com