Tom Purcell
|
Posted: Jun 05, 2017 2:31 PM
Share   Tweet
The opinions expressed by columnists are their own and do not necessarily represent the views of Townhall.com. 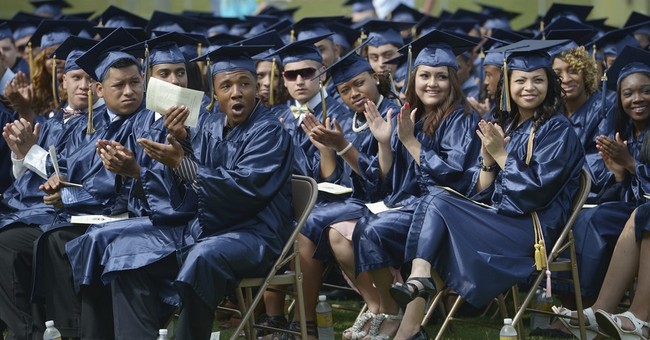 "I may have to do WHAT to receive my high school diploma?"

"Pass a U.S. citizenship exam. The Civics Education Initiative is hoping state legislatures will require high school students in all 50 states to pass the exam in order to graduate. Some states, such as Arizona, have already passed such a law."

"But my high school made me take American history courses, and I got straight A's."

"Great for you, but many studies show that many Americans are pathetically ignorant of basic facts about their government and its unique history."

"If it becomes a requirement for high school graduation, how will this citizenship test work?"

"You'll have to pass a test on 100 basic facts of U. S. history and civics taken from the United States Citizenship Civics Test - the test all immigrants applying for U.S. citizenship must pass. You'll have to answer at least 60 percent of the questions correctly to pass."

"Can you help me prepare for these questions, sir?"

"Sure, young fellow. What is the Declaration of Independence?"

"It is an amazing document, sir. Thomas Jefferson wrote to King George III, telling him to stuff it. The Declaration said that all men are created equal, that the power of government comes from the people, that people can change the government if they don't like it, and that individuals have unalienable rights, among them life, liberty and the pursuit of happiness."

"OK, why were the colonists so upset with the Brits that they declared independence?"

"Well, sir, this was because of the Stamp Act, the high taxes imposed on every piece of paper they used. This 'taxation without representation' infuriated the colonists and motivated their desire for independence."

"Fascinating. I didn't know that, either, young fellow. OK, what was the Constitutional Convention?"

"Sir, this took place in Philadelphia during the summer of 1787, when 55 delegates from 13 colonies drafted the U.S. Constitution. It established a republic, which grants power to the people, who vote for officials to represent them. The Constitution divided government power among three branches - legislative, judicial and executive - to ensure checks and balances."

"Hey, that was some good thinking. What does the judicial branch do?"

"Its job is to review and explain the laws and resolve disputes between parties. Most importantly, it is supposed to objectively determine if a law is in accord with the U.S. Constitution."

"OK, what is the First Amendment?

"It is from the Bill of Rights, the first 10 amendments to the Constitution that were designed to protect individual rights. The First Amendment protects freedom of speech, religion and assembly, the right to petition the government, and freedom of the press. It is essential to the survival of a democracy that the press be objective and that it works hard to root out corruption."

"I had no idea that amendment had so much stuff going on. What is the rule of law?"

"That's an important one, sir. In America, everyone must follow the law, including leaders and government employees. No one should ever be above the law in America."

"OK, name two or more ways that Americans can participate in their republic."

"Young fellow, you know more about American civics than most people. It's too bad all Americans aren't required to pass the citizenship exam every now and then to understand basic facts about our government and its unique history."

"Perhaps so, sir, but that would be unconstitutional."