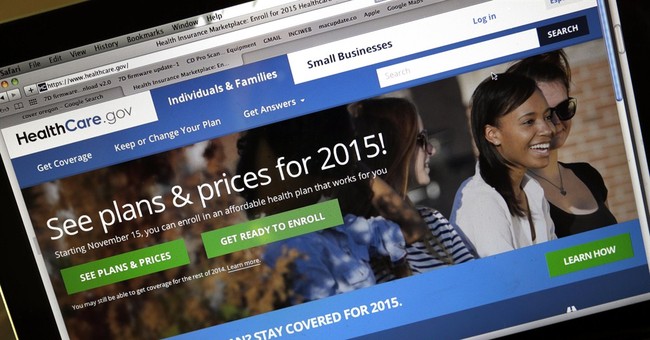 Open enrollment is making me miserable.

Like millions of self-employed Americans who have been buying their own health insurance for years, my policy, which I had liked and wanted to keep, has doubled in cost since Obamacare became law.

What a fine policy mine was. I purchased it in 2005 when I moved back to Pittsburgh. It gave me broad access to lots of doctors and my maximum out-of-pocket cost could not exceed $1,500 a year.

But Obamacare mucked it all up.

First, I got a letter telling me my policy was canceled for failure to meet Obamacare guidelines. (“If you like your insurance, you can keep your insurance” – my eye.) A few weeks later, though, the policy was reinstated for reasons neither I nor my insurer could ever figure out.

For the moment I was happy. Sure, the premium had gone up 35 percent, but at least I got to keep the policy. But for 2016, the premium jumped another one hundred dollars per month. It’s nearly doubled in the past two years. (Obamacare will “cut the cost of a typical family's premium by up to $2,500 a year,” said the President. Yeah, and I am the King of England.) So, for the past two weeks, I’ve been logging many hours searching for lower-cost alternatives.

In fact, to find a policy similar to what I have, I’d have to purchase the “gold” level, which is 200 to 300 bucks more than the high premium I am paying.

So I looked into non-profit healthcare cost sharing ministries — faith-based organizations through which members voluntarily share each other’s medical bills. Rather than pay a monthly premium to an insurance company, members send in a monthly “gift” at significantly less cost. Consider: A bronze plan for UPMC has a $6,500 deductible and a $300 monthly premium. A bronze plan for Christian Healthcare Ministries has a $5,000 deductible and a $45 monthly cost.

There is no foolproof guarantee that such ministries will cover a member’s medical costs — they are not required to keep a reserve — and they don’t cover preexisting conditions or the outcome of non-Christian behavior, such as out-of-wedlock pregnancy. However, they’ve been around for decades and members report extremely high levels of satisfaction.

If I go that route, I may also consider accident and indemnity insurance for added protection. An accident policy would pay a fixed amount if I suffer an injury to cover the cost of an ambulance ride or a hospital stay. An indemnity policy would cover me in the event of a serious health ailment, such as a stroke or a heart attack — both of which are likely now that Obamacare is legal.

The truth is I’m not sure what I am going to do, but it agitates me to no end that I, and millions of others, have to work so hard to devise an affordable health insurance strategy.

Obamacare has completely upended a system that the vast majority of Americans were happy with — drastically increasing our costs — in order to expand insurance coverage, says Forbes, to only 2.7 percent more Americans.

That’s madness. We could have expanded coverage to the small number of newly insured — the poor and those with pre-existing conditions — without disrupting one-sixth of the U.S. economy.

That’s why open enrollment is making me miserable. It’s more like open season on healthcare consumers.

FBI Confirms Remains Found in Wyoming are Those of Gabby Petito
Landon Mion
Psaki Confirms Border Patrol Agents Will Be Disciplined For Protecting America
Katie Pavlich
'Where Is She?' MSNBC Host Rips Kamala Harris For Being a Miserable Failure on the Border
Matt Vespa
Rep. Jordan on Border Crisis: ‘The White House Is Not Willing to Embrace the Policies That Work’
Madeline Leesman
Bob Woodward: Milley’s Call with China was Made ‘in the Interest of Protecting the Country’
Landon Mion
'Asleep at the Switch': Nikki Haley Rebukes Biden's UN Address
Reagan McCarthy